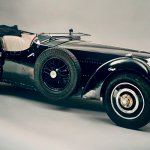 With a “Sleeping Beauty” 1937 Bugatti Type 57S selling for more than $5.6 million and an awaiting-restoration project

1960 Aston Martin DB4GT bringing in more than $2.7 million, Bonhams “Legends of the Road” live and online auction did very well, even with a very limited docket, on February 19 at the company’s New Bond Street headquarters in London.

The docket offered only five cars, plus several lots of automobilia, yet reached more than $9 million in total sales.

All of the cars sold, including a sixth car, a 1965 Ferrari 275 GTS convertible, that was not included in the auction total because it “sold by mutual agreement in advance of the auction for an undisclosed sum,” Bonhams reported.

The Bugatti, which was offered at no reserve, had been “off the road and out of sight” for the past 50 years, Bonhams said.

“The desirable pre-war supercar, (was) the fastest road car of its time and one of only 42 produced,” the auction house said. “The Bugatti had been preserved in the North Staffordshire workshop of its late owner, respected engineer, Bugattiste and native New Zealander Bill Turnbull, since 1969 and was presented in exceptionally original condition, with largely intact black paintwork, cream leather interior and original coachwork.

“Mr. Turnbull had embarked on a painstaking restoration project which was his life’s work, and the 57S was offered as an advanced project close to completion, only in need of some final re-assembly.

“This sleeping beauty was certainly one of the most important pre-war Bugattis – and possibly the last hidden example — to be auctioned in recent years,” said Sholto Gilbertson, Bonhams Motor Cars director for the UK.

“The 75S offers an exciting opportunity for its new owner to complete Bill Turnbull’s ambitious and exacting restoration.”

The car was built on a special lightweight chassis previously used on one of the three Bugatti works 57G streamliner “tank” racing cars; that streamliner contested in Grand Prix racing in 1936 and set speed records while being driven by Jean-Pierre Wimille and Pierre Veyron. The 75S originally was sold to shipping magnate Robert Ropner with Corsica of London coachwork, Bonhams said.

Like the 75S, the 1960 Aston Martin DB4GT comes with some assembly required. Bonhams reported an 8-person bidding battle for the car originally owned by Syd Green, founder of the Gilby Engineering Grand Prix racing team. The car’s late owner acquired it in 1966, took it on several European road trips and then started restoration in 1983.

That restoration was not finished, but the car was offered for sale with nearly all of its original parts.

Bonhams reported a 100 percent sell-through for the automobilia section of the sale. The top sale of that portion was $33,677 paid for a Bugatti type 57/57S transmission, which also came from the Turnbull estate.

Bonhams next auction is the Les Grand Marques du Monde a Paris sale, an online event schedule for March 3-10.