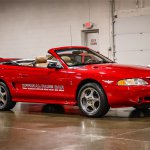 To celebrate this honor, Ford produced 1,000 replicas of the Mustang Cobra Pace Car convertible and AutoHunter, the online auction platform driven by ClassicCars.com, has one up for auction at no reserve with only 10,000 miles driven on it.

All Cobra Pace Car Editions were finished in Rio Red and equipped with a tan cloth soft top that is power-retractable and features a glass rear window. They’re also decorated with Indianapolis 500 Pace Car livery, including black decals on the front fenders and doors.

This model has a revised front cross member and front underbody X-brace.

The Cobra’s interior is fitted with tan carpeting and saddle leather bucket seats. The headrests have embroidery of the Indy Motor Speedway.


Under Cobra’s hood is the 302cid 5.0-liter v8 engine, the same engine of the Indy 500 Pace Car. In this car’s trim level, the engine was factory-rated at 240 horsepower and 285 pounds per feet of torque due to a unique upper and lower manifold induction system. Power is sent to the rear wheels through a 5-speed manual transmission.

The sale of the car includes the factory key fob, owner’s manual, a framed display with original selling documents and promotional cassette tape.

The odometer reads just under 10,000 miles, which are original to the vehicle.

Visit this vehicle’s AutoHunter listing to find further information and gallery of photos.