Turning around wrong-way drivers, and tearing down roads that tore up cities 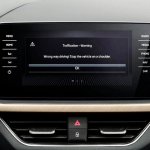 Wrong-way drivers cause mayhem and even death on the highway, but Czech automaker Skoda and a GPS app supplier have what seems to be an obvious solution to at least part of the problem.

First offered in the Skoda Superb model, and now available in others as well, Skoda and Traffication have devised an app that is downloaded to the car’s navigation system that not only provides alerts to dangerous traffic situations ahead, but that warns wrong-way drivers of the error of their ways and instructs them to stop their vehicle on the shoulder of an entrance ramp they’ve just entered by mistake.

The app works with the third-generation of Skoda’s Modular Matrix infotainment system. Automotive supplier Bosch collaborated with Skoda on the warning system which, according to the news release, was developed for smartphone use in 2018 and is offered by 25 “app partners” in Europe. Skoda is the first automaker to provide the feature in its vehicles.

But shouldn’t such technology be incorporated into every GPS and navigation system in every smartphone and every vehicle on the road everywhere? Wouldn’t it also be less expensive than the entrance-ramp and highway electronic-sign setups being installed in several cities where wrong-way drivers have become all too commonplace?

“Our goal is to put the wrong-way driver warning system in every car. Every accident caused by wrong-way drivers is one too many,” says Dr. Mathias Pillin, president of Bosch’s Cross-Domain Computing Solutions division.

Are your ready for road deconstruction zones?

Speaking of things going wrong, are you aware that lobbying in Congress has resulted in legislation that proposes to demolish several highways?

The Streetsblog website has reported that the Economic Justice Ace includes $10 billion for a pilot project “that would provide funds for communities to examine transit infrastructure that has divided them along racial and economic lines and potentially alter or remove them. It would also help pay for plans to redevelop reclaimed land.”

Pushing the plan is an organization called the Congress for New Urbanism, which in fact helped produce the bill’s wording.

Bloomberg CityLab reports that the Congress for New Urbanism has identified for destruction 10 of the “most ill-advised urban highways” that were built in the 1950s as part of the interstate system but that basically destroyed low-income neighborhoods, frequently homes to people of color.

At the same time, President Biden has met with lawmakers from both parties seeking support for a $2 trillion infrastructure reform program that would, among other projects, rebuild decaying roads and bridges as part of a new surface transportation bill to replace the one expiring this fall.

So we may be rebuilding and tearing down at the same time?

The post Turning around wrong-way drivers, and tearing down roads that tore up cities appeared first on ClassicCars.com Journal.