Would you shut your eyes for 4.6 seconds while driving? 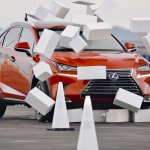 Imagine you are driving 55 mph and shut your eyes for 4.6 seconds. By the time you open your eyes and see the road ahead, you will have traveled the length of a football field.

The reason 4.6 seconds is an important number is because that’s how long it takes to send or receive a text message while driving, according to the National Highway Traffic Safety Administration.

“April is national Distracted Driving Awareness Month, established by the National Safety Council more than 10 years ago,” Lexus reported as it released a video about texting while driving. “It’s a good time to regroup and reconsider the choices we make when we’re on the road.

“Distracted driving is dangerous, claiming 3,142 lives in 2019 (the most recent available data) according to NHTSA. Texting is the most alarming distraction. At 55 mph, taking your eyes off the road for 4.6 seconds is like driving the length of an entire football field with your eyes closed.”

Lexus notes that the 4.6 figure is important because most drivers assume they can send or receive a text in a second or two, that it is only a momentary distraction.

In the new video, called “Driving Disrupted,” Lexus shows the impact — pun intended — when drivers cannot see the road ahead for 4.6 seconds — and the video was shot at speeds well below 55 mph.

“Participants get behind the wheel of a Lexus NX on a closed course, thinking they’re taking the vehicle for a routine test drive,” Lexus notes. “What they don’t know is that they’re not driving an ordinary NX. They’re driving a one-of-a-kind specially modified vehicle called the NX 4.6. It’s equipped with electrochromic technology that turns the windshield and windows from transparent to opaque instantaneously, completely obscuring the driver’s view for 4.6 seconds. The video captures the chaos that ensues.”

According to Vinay Shahani, a Lexus vice president, “Lexus wants to bring awareness to safety behind the wheel by changing perceptions about texting and driving. Even the most advanced safety systems on the road today can’t replace the undivided attention of the driver.”

The post Would you shut your eyes for 4.6 seconds while driving? appeared first on ClassicCars.com Journal.