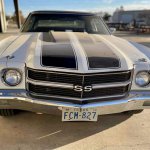 With no significant changes at the top of the most-searched-for vehicles on the ClassicCars.com Marketplace in May, we thought it might be interesting to not only take a deeper dive into the “second 10,” but also beyond to see if there are vehicles showing recent interest among prospective buyers.

Each month we report on the most-searched-for vehicles by year, make and model and by a generic all-years search. As usual, the 1969 and 1967 Ford Mustang, the 1969 Dodge Charger and the 1964 and 1967 Chevrolet Impala top the year/make/model list while the all-years category again is led by Chevrolet, Mustang, Ford and Chevy C10, with DeLorean edging ahead of Dodge in their ongoing duel for fifth place.

If you’re wondering about the 1969 Camaro, it’s been a solid top-10 search for several months, which may explain why people now are searching for nearby model-year examples.

Chevelles from the late ‘60s and early ‘70s also seem to be attracting increased attention from those searching the marketplace.


“The Chevy Chevelle has been a favorite of GM Muscle car fans since these cars were new and that has never dissipated,” notes Journal East Coast editor and marketplace analyst Andy Reid. “All you need to do to understand the continued enthusiasm for the Chevelle as a collector car is to drive a 396 Ram Air Chevelle at the limit and you are bound to be a convert.”

Meanwhile, among those searching simply by make or model regardless of year or production, Chevelle has climbed into top-10 contention while another vintage Chevy, the Nova, has been drawing attention of late, solidly into the “second 10” in both April and May.


“The Nova has been for years the best buy choice in GM Muscle cars,” Reid suggests. “They have been affordable for quite a while, especially when compared to the Chevelle and Camaro.

“These cars are gaining more interest and popularity due to the affordability factor,” he adds. “The Nova is a fun and easy to maintain car with lots of ways to modify it if you want more speed.

“Novas are a perfect classic car for the true hot rodder due to their lower cost and aftermarket support. Prices are tracking well against the Chevelle and on the move as well.”

By year, make and model