Although it hasn’t seen a major overhaul in recent years, the RM-Z450 is fun to ride and is less expensive than its competitors. The 2021 Suzuki RM-Z450 is the Japanese manufacturer’s one and only 450cc dirt bike. In last year’s Dirt Rider shootout, staff determined that the RM-Z450 was “a good motocross bike in a segment filled with greats.” Noticing the RM-Z’s potential, Dirt Rider improved its power and suspension with aftermarket products in its 2021 Suzuki RM-Z450 Project Bike build in order to make the good bike even better. It’s a bargain at $8,999, which gives some room for improvements, especially if the end user plans on racing. Otherwise, the ideal demographic of the stock trim version are casual trail riders, vets, or even mom/dad going on the occasional weekend trip with their kids.

The bodywork’s graphics are new, but no mechanical updates for the 2021 engine. There is, however, engine tunability with the MX-Tuner 2.0 system and smartphone app. This app allows the user to change fuel delivery and ignition system settings.

At $8,999, the full-size Suzuki motocrosser sits well below the $9,399 MSRP of the Kawasaki KX450 and Yamaha YZ450F, which are the lower-priced models in the competitive 450 class.

The 449cc liquid-cooled four-stroke engine continues to power the 2021 RM-Z450. As mentioned, the powerplant is tunable with the help of the MX-Tuner 2.0 app where EFI can be adjusted via four preprogrammed maps and custom fuel and ignition maps can be built. Upon review, Dirt Rider observed that the bike is heavier than its competition both in its measured 250-pound weight and hefty feel on the track, the latter of which is attributed to its heavy engine character. Luckily, the MX-Tuner app helps lighten these engine characteristics.

Prior to playing with the engine maps, it ran on our in-house dyno where it produced 50.2 hp at 8,800 rpm and 33.2 pound-feet of torque at 7,600 rpm at the rear wheel. Compared to others of its class this is not a “fire-breather” as test rider Allan Brown put it, but it makes good torque that “is responsive enough off the bottom, and revs just high enough to not feel flat.” Shifting through the five-speed transmission is reported to be smooth and clutch fade is minimal. 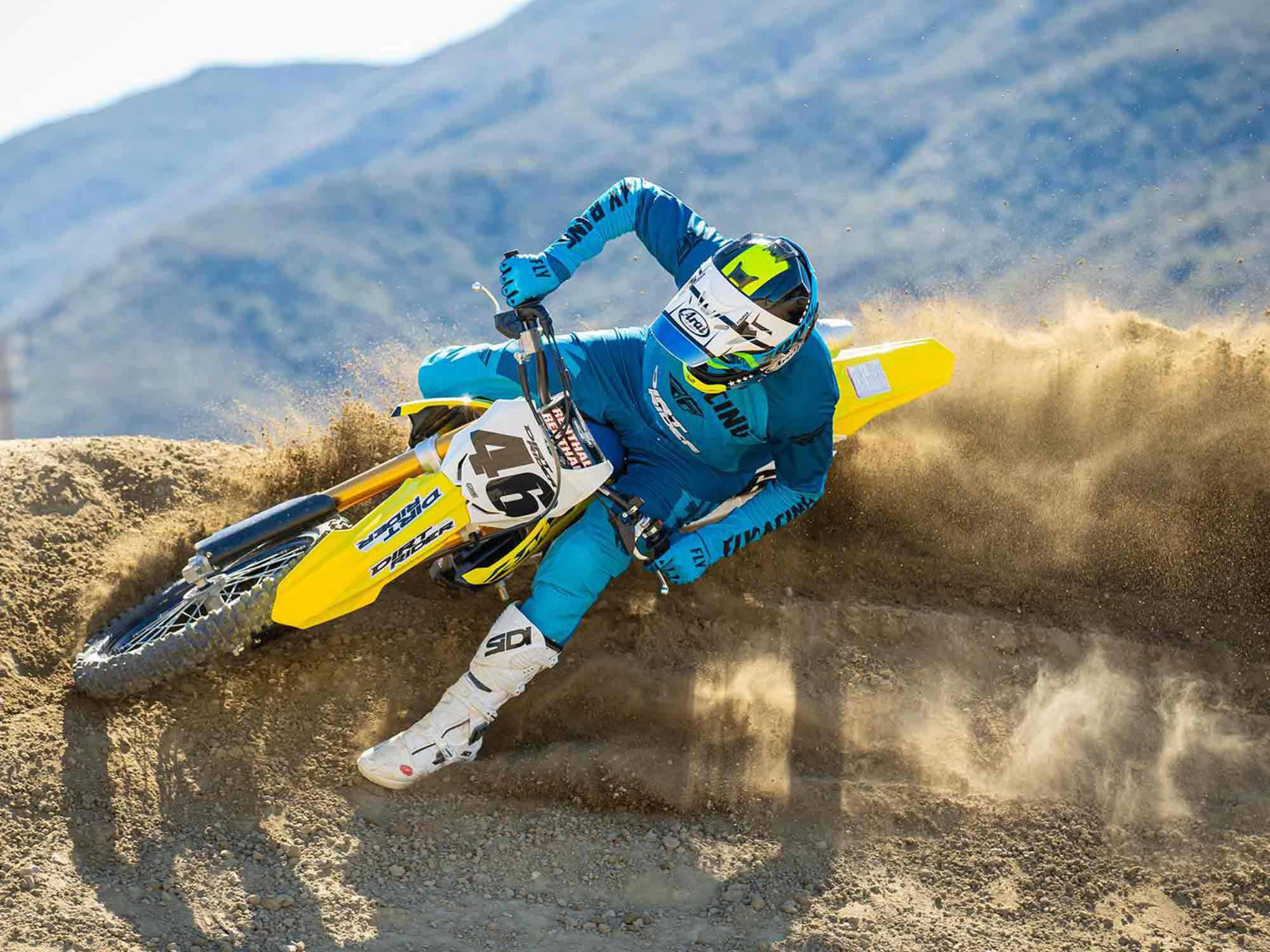 This 450 motocrosser’s chassis provides excellent cornering, and overall handling is “decent despite its rigid feeling,” Brown says, but this stiffness does result in decreased comfort.

The RM-Z450 features a Showa 49mm twin-chamber coil-spring fork and Showa Balance Free Rear Cushion (BFRC) shock, both of which have remained largely unchanged since they debuted on the bike in 2018. The shock specifically is what needs an update most. Test rider Brown wrote that if this motocrosser is used more casually it will probably do, but more aggressive riding or racing requires modifications. Because the chassis is so rigid, the rider is inclined to soften the suspension. However, softening the settings causes pitching which was resolved when Brown nearly fully closed the compression and rebound adjusters and also set the sag close to 100mm. The resulting high rear-end stance, however, did add some harshness to the fork.

No real-world miles-per-gallon figures, but the RM-Z’s 1.7-gallon fuel tank is the same size as the Honda CRF450R, 0.1 gallon less than the Austrian competition, and 0.1 gallon larger than its Team Green and bLU cRU competitors.

The cockpit feels a bit smaller than other bikes in its class and is fine for riders 6-foot and under, but taller than that and the rider may want to look at a taller handlebar or lower footpegs. While it has EFI and new MX-Tuner 2.0 connectivity, one downfall is that there is no electric start. Other electronics include Suzuki Holeshot Assist Control (S-HAC) and a traction management system.

No warranty is available.

Although its suspension needs attention and its measured weight is heavier than the competition, the RM-Z is still fun because it corners well and has usable, now easily tunable, power. 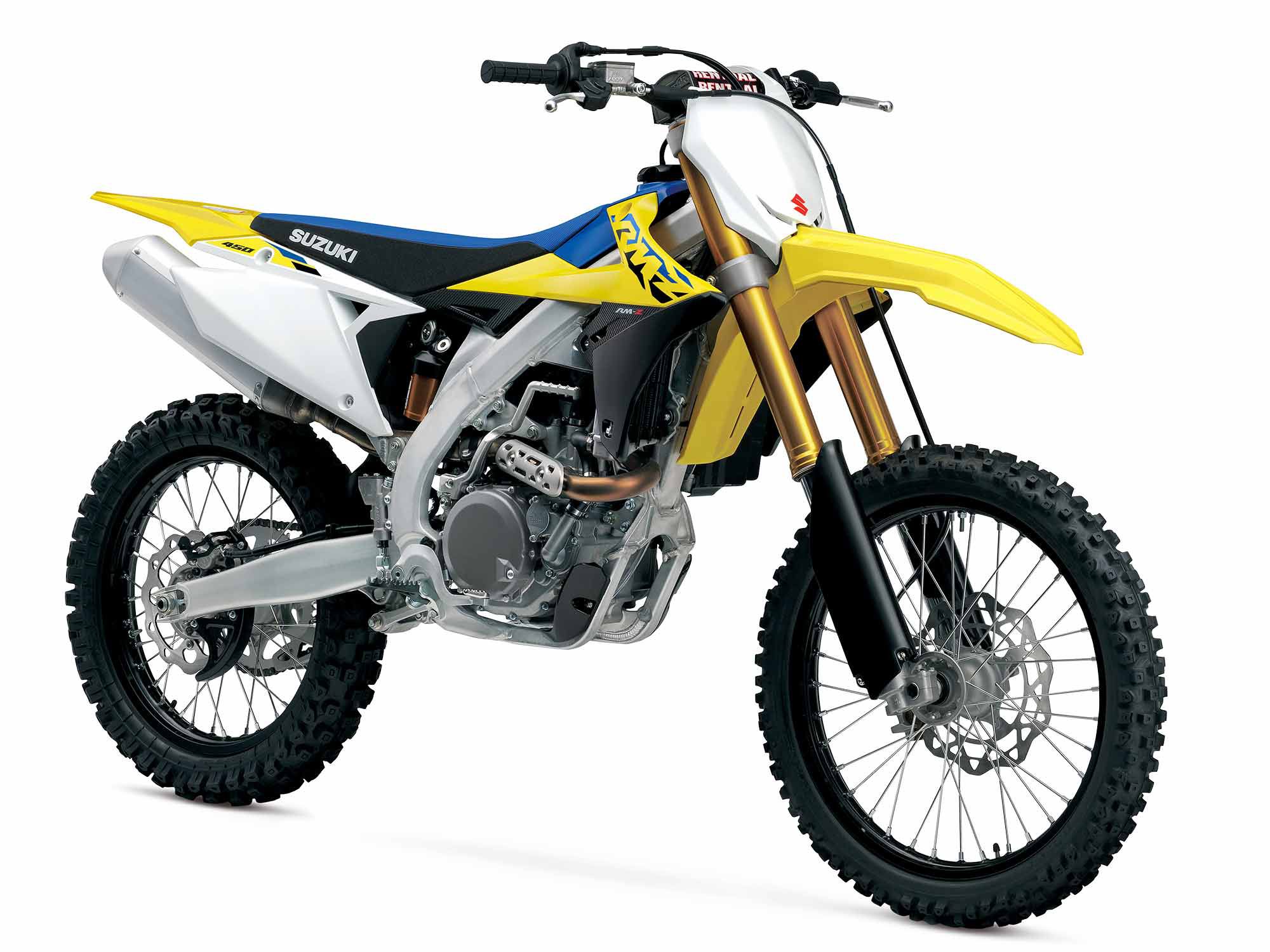