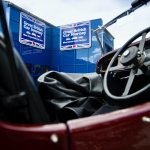 England’s newest car museum has opened, and its creation was inspired by a 32-year-old Austin Maestro, according to Richard Usher, founder of the Great British Car Journey.

“Four years ago, when I owned and managed Blyton (motorsports) Circuit, a gentleman approached me asking if I’d like to buy his 1989 Austin Maestro in mint condition with just 10,000 miles on the clock,” Usher is quoted in a news release.

“My first thought was ‘no.’ but it then got me thinking about when I last saw an Austin Allegro, Metro, original Mini, or even a Ford Cortina on the road. These were cars that were once on virtually every street in Britain and sold in their millions.”

With that “seed” nurtured over the course of the next four years, Usher and four investors set out to collect British designed and manufactured vehicles and to showcase them in a museum designed to tell the story of the UK motor industry.

The seed was planted and Richard, together with four private investors, set about amassing one of the largest privately owned collections of British designed and manufactured cars in the country.

Visitors to Great British Car Journey will be guided round the exhibition with a unique handheld audio device which tells the fascinating story of individual vehicles as well as the development of the UK’s motor industry.

The museum displays more than 130 vehicles in a former wire works factory on the banks of the River Derwent in Ambergate, Derbyshire. From a 1922 Austin Seven to a modern McLaren 650S, visitors are led on a trip through British automotive history.

Usher explained that the cars are grouped by decade, which he calls chapters in the story, and are set in those chapters with artifacts from the era.

Two unusual aspects of the museum are the fact that people can get close to the cars, and even drive some of them.

“The vehicles are easily accessible,” Usher said. “We want people to smell the old car smell, marvel at the interiors and jog memories of trips in the family car, their first car or back seat fights with their siblings when they were growing up.

“Everyone who has been on the journey, whether a car nut like myself or not, doesn’t fail to have a smile on their face remembering days gone by. Great British Car Journey is the ultimate trip down Memory Lane.”

In addition to the cars inside the museum, another 32 can be driven on a private road as part of the museum’s Drive Dad’s Car experience.

“How bad a car was the Austin Allegro and was the Reliant Robin really a car at all?” the museum notes on the Dad’s Car website. “They are all ready and waiting for your judgment as is our fabulous Jaguar XJS and Rolls Royce Silver Spirit.”

You don’t get to do the driving June 20 when the Auburn Cord Duesenberg Automobile Museum in northeast Indiana stages its Father’s Day Classic Car Cruise, but from 2 p.m. to 5 p.m., visitors will be able to go for a ride in one of the museum’s classic vehicles.

There is no charge for the event, but the museum does as for riders to make a “free will donation” to support the facility and its programs.

“As our mission states, the museum seeks to provide multi-generational audiences an educational and inspirational journey exploring the past, present, and future of the transportation industry,” executive director Brandon Anderson is quoted in the event announcement. “We are excited to be able to offer a way to be a part of the museum, its collection, and the history we preserve by taking a cruise in one of the Auburn or Duesenberg vehicles that showcase our history while creating unforgettable memories.”

Not only is this June 12-13 a Hoods Up Weekend at the Newport Car Museum in Rhode Island, but the museum recently has unveiled its latest additions, a 2014 McLaren P1 and a 2019 McLaren Senna, those cars now on center stage in the World Car gallery.

The museum also has announced that starting June 16, it will offer free admission to fathers for a week with the purchase of an adult admission ticket by another family member.

The Seal Cove Auto Museum in Maine hosts a cars and coffee event and free museum admission from 9 a.m. until noon on June 12. Convertibles are the featured marque for the gathering.

The Simeone Foundation Automotive Museum in Philadelphia offers “Photographing the Details” with Michael Furman from 10:30 a.m. until 2:30 p.m. on June 12.

June 12 is Motorbike Day at the AACA Museum in Hershey, Pennsylvania. The event will include a show featuring dirt, road, competition, scooters, mopeds and minibikes, a motorcycle-themed flea market and a ride through the Pennsylvania countryside.

The Indianapolis Motor Speedway Museum hosts a cars & coffee cruise-in and free museum admission from 8 a.m. to 11 a.m. on June 12.

On June 15, the Mercedes-Benz Museum in Germany opens its outdoor stage as a venue for cultural events through the rest of the summer.

When part of a family that purchases one adult ticket, Dads will be admitted free at the Newport Car Museum in Rhode Island from June 16 through June 23.

The AACA Museum in Hershey, Pennsylvania, will host a “Sizzlin’ Summer Cruise In” from 8 a.m. until 2 p.m. on June 19. Among the event features will be a visit by Jimmy Rosen, his book on vintage gas stations, Got Gas?, and his 1947 Plymouth, and a Studebaker and Tucker parade.

There are more than cars to see in Beaulieu, England, home to the National Motor Museum. From June 19 to August 30, the Beaulieu Palace House will showcase more than 250 sculptures in its gardens and inside the Montagu family home. And June 19 is the date for the annual Simply VW show.

Dads get free admission June 20 at the Simeone Foundation Automotive Museum in Philadelphia.

The Lane Motor Museum in Nashville, Tennessee, not only offers free admission for dads on Father’s Day, June 20, but free Vault tours as well. The museum also will have three local food trucks on side that day — Steaming Goat sandwiches, Coco’s Italian pizza and Bradley’s Creamery ice cream.

Beaulieu and its National Motor Museum and the Solent Renegades club co-host a Hot Rod & Custom Show on June 20.  The event includes the Vintage Pop-Up marketplace with retro fashions, housewares and automobile accessories.

Van Halen 2, a tribute band, will perform at 8 p.m. on June 25 on the Gilmore Car Museum campus in Hickory Corners, Michigan. Funds from the $20 admission charge go toward K-12 educational tours of the museum and the Gilmore Garage Works high school training program.

The Miles through Time museum in Clarkesville, Georgia, hosts its fifth annual car show at the Old Clarkesville Mill from 10 a.m. until 2 p.m. on June 26.

June 26 is Family Day at the Gilmore Car Museum in Hickory Corners, Michigan, with free rides in vintage vehicles, $1 hot dogs and other family friendly events.

LeMay – America’s Car Museum in Tacoma, Washington, launches a new exhibition, “Alfa Romeo: Born from Passion” with a brunch with Italian Flair from 9 a.m. until 11 a.m. on June 26.

The Gilmore Car Museum in Hickory Corners, Michigan, plans another of its live concerts for 8 p.m. on July 10 featuring The Spazmatics, billed as the “ultimate ‘80s tribute band.” Unlike other such events at the museum, this will be a “walk-in” concert with visitors asked to bring folding chairs or blankets for the event.

The British Motor Museum at Gaydon hosts the BMC & Leyland Show on July 11, a gathering of British Motor Corporation, British Leyland and Rover Group vehicles. Celebrated this year are the 50th anniversary of the Morris Marina, a Historic Rally Display by the Historic Marathon Rally Group and the Mini Cooper Register, and a display of emergency service vehicles.

It’s “Simply Vauxhall” on July 17 at the National Motor Museum in Beaulieu, UK, where Vauxhall vehicles will gather for a show.

The inaugural North East Motor Sports Museum rally-tour Around the Lake is scheduled for July 31. The event begins at the museum in Loudon, New Hampshire, and will take scenic roads to the Vintage Racing Stables car collection in Sanbornton. the event is limited to 1972 or earlier vehicles.

With so many events canceled in 2020, the British Motor Museum at Gaydon will turn the Gaydon Land Rover Show scheduled for July 31-August 1 into the 50th + 1 anniversary for the off-road automaker. “We’re looking forward to having a belated birthday celebration,” said show manager Tom Caren.

Hello, I’m Paul Page: It’s Race Day in Indianapolis and its authors, Paul Page and J. R. Elrod, will be featured from 10 a.m. until 2 p.m. on September 25 at Autobooks-Aerobooks in Burbank, California.

Does your local car museum have special events or exhibitions planned? Let us know. Email larrye@classiccars.com.