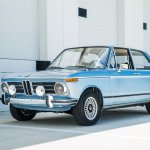 Up for auction on AutoHunter, the collector car online auction platform driven by ClassicCars.com, is this restored, low-mileage 1972 BMW 2002 Touring previously owned by a member of the BMW Club Clásicos Colombia.

The BMW 2002 Touring example featured on AutoHunter was a European native and later imported to Colombia to be restored to its original specifications, including a respray in a factory-offered Fjord Blue metallic paint.

The body also features narrow bumpers with black trim, a set of Hella driving lights fitted to the front end and round taillights found on all 2002 Touring models.

The all-black interior has been kept original and unrestored. It houses a three-spoke steering wheel, a Blaupunkt AM/FM radio and sunroof operated by crank.

Power comes from a 2.0-liter SOHC, 8-valve M10 4-cylinder engine paired with a 4-speed manual transmission. The engine was factory rated at 99 horsepower when new.

Along with sale comes two sets of keys, nearly 70 pages of documentation consisting of invoices, receipts, historical certifications and a Liqui Moly calendar and posters in which the BMW was featured.

Visit this vehicle’s AutoHunter listing for more information and gallery of photos.