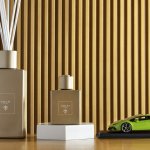 Olfactory branding may be the new buzzword among automakers. At least it seems to be all the rage among some upscale European automakers offering fragrances designed for owners of their vehicles.

The latest such project involves Automobili Lamborghini and Culti Milano, which have launched a fragrance line inspired by Lamborghini’s vehicles.

“The citrusy opening is accompanied by a lively heart and an enveloping base that expresses a refined, intense and vigorous spirit, which swings with a fresh sprint that brings out the notes of grapefruit, bitter orange, bergamot, vetiver and finally converges in an enveloping base of cedar wood and sandalwood,” according to the news release.


“The design of the packaging has a bold character and clean contours. For the Decor diffuser, available in 500ml, 1000ml and 2700ml sizes, the Bronzo Zenas color was chosen from the Lamborghini color range, with a matte finish and screen-printed logos.

“The wicks in white technical fabric fiber attest to the attention to aesthetics with a linear and high-performance delivery of the fragrance.

The fragrance, apparently a unisex version, is available at Lamborghini’s flagship store in Sant’Agata Bolognese and at Culti House outlets in several major Italian cities.

According to the news release, Culti House was founded in 1988 by Alessandro Agrati in his personal effort to explore “the link between the design world and the world of the senses” and to “revolutionize the very way people experience spaces and objects.”