The Tragedy of Macbeth

Homage has always been the lingua franca of the Coen brothers, and though Joel and Ethan have parted ways with prospects of another joint feature looking dim, that much hasn’t changed. Their films append scare quotes to hidebound American genres like the western, screwball comedy, noir, or musical, a practice that Joel applies to the concept of the filmed play through less overt and less ironic means in his solo directorial debut.

His magnificently mounted The Tragedy of Macbeth finds a fresh angle on an English 101 staple by peering into the past for aesthetic cues and tapping into its lineage of gorgeous artifice. The stark black-and-white photography and boxy Academy ratio foster an aura of the old world.

Not the medieval era in which Macbeth (Denzel Washington, at the height of his powers) jockeyed for the throne of Scotland, however, instead transporting us to the first half of the 20th century, when the membrane between Tinseltown and the most highbrow halls of Broadway was more porous and permissive. Coen eschewed location shooting for breathtaking soundstage sets in order to simulate the rawness of the theatre without getting hemmed in by the shape of the proscenium. 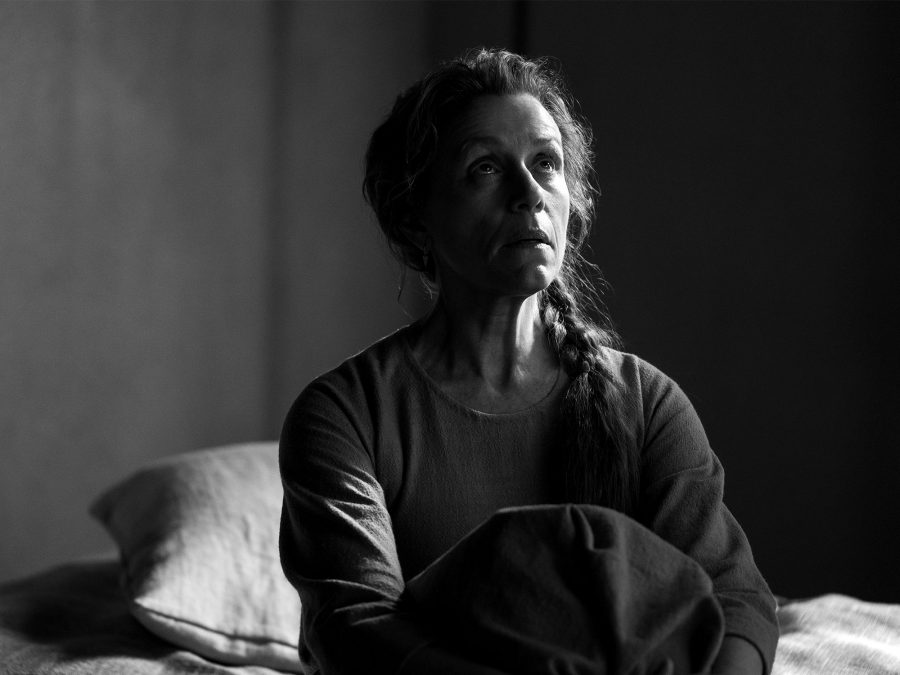 While his script remains faithful to the text, Frances McDormand finds new shades of defiance in Lady Macbeth and Kathryn Hunter’s gurgling interpretation of the Weird Sisters suggests that Gollum might be their brother. In a role done so many times that its dialogue has begun to sound like incantation, Washington reinvigorates the apprehension and eventual power-hunger of Big Mac with unexpected readings, underplaying big moments and loosing his full gravitas in quieter scenes. He practically tosses off the “tomorrow and tomorrow” soliloquy, and it works because by that point, he’s already demonstrated how much he’s holding in.

The creative departures come through in the spartan sets and how cinematographer Bruno Delbonnel shoots them. Indoors, Coen gives his cast little more to work with than walls and large stone blocks swathed in frame-whitening fog. When paired with a story so settled in centuries of enshrinement, the meticulousness of Coen’s craft can sometimes slip into formalism for its own sake, as if Shakespeare’s words function as scaffolding on which to hang the painterly compositions.

During what we may have to sadly refer to as the “brothers era,” their typical project would be packed with commentary, symbolism, and philosophical tangents. However elevated by style, this one is what it is, its narrative self-evident and unaltered.

Even if the dry wit and cherrypickable allusions may be absent, the technical virtuosity on display marks this as the work of a master. Visceral, haunted, and severe, Coen’s vision coaxes out not just the intensity in the play – every “gritty” take has done this, from Roman Polanski to Justin Kurzel – but in its older renderings. Newly single, he’s in the process of rediscovering what it means to make a film his own. That won’t stop him from making ’em like they used to.


Something Coen this way comes.
5


An innovative take on the Bard with an eye to tradition.
4

The post The Tragedy of Macbeth appeared first on Little White Lies.