Floyd
May 13 edited May 13 in Cars Motorcycles The eagerly anticipated DesertX is completely new: new chassis, dimensions, and design, Ducati’s first production bike with an off-road-style 21-inch front wheel. Its only familiar component is the 110 hp, 937cc water-cooled Testastretta engine. While it takes inspiration from the iconic Dakar bikes of the early 1990s, and it certainly resonates with that vibe, a huge amount of current technology has been poured into Ducati’s retro enduro.

Ducati first revealed its DesertX concept at EICMA back in 2019 as an air-cooled 1100 with a side-mounted Scrambler-style shock. It looked awesome. The production bike today looks similarly impressive; thankfully, Ducati has stayed with the concept bike’s evocative twin LED headlights. The powerplant is now the aforementioned Testastretta L-twin, and the rear shock has moved to a more conventional position, but otherwise it’s refreshingly true to the original vision.

This is a historic step for Ducati. The X is the company’s first production bike since the 1960s to come from Bologna with a 21-inch/18-inch front/rear wheel combination, and the bike required an all-new chassis, suspension, electronics, and so on; in fact, almost every part is unique to the DesertX.

The familiar Testastretta L-twin isn’t a straight swap from the Multistrada V2. The gearing has been adapted for off-road riding, with first and second gear now 14.3 percent and 8.7 percent shorter than the V2′s bottom two ratios. Fueling, intake, and exhaust are unique to the DesertX. Ducati quotes peak outputs of 110 hp at 9,250 rpm and 68 pound-feet at 6,500 rpm from the Euro 5-compliant engine.

With the first few twists of the throttle, it’s evident that Ducati has got the throttle response spot-on. In Touring mode throttle delivery is smooth and soft. Each gear slots home with well-engineered ease, even without the clutch thanks to the (standard) up-and-down quickshifter.

There are six riding modes to choose from: Sport, Touring, Urban, and Wet, plus two off-road specials, Enduro and Rally. Each mode adapts the power output and throttle response, with Sport and Touring allowing the use of the full 110 hp, albeit with different throttle responses. Urban and Wet cap peak power at 95 hp. Enduro brings that down to 75 hp, whereas Rally lifts it back to 110 hp, again with each mode deploying a specific fuel map. ABS, DTC (traction control), DWC (wheelie control), and EBC (engine-braking control) are all present and lean-sensitive.

Most owners will opt primarily for Touring, with its syrupy-smooth throttle response and access to full power. But keep in mind that while Sport mode is certainly livelier and more direct, Ducati has also managed to maintain user-friendly smoothness. During heavy rain the Wet mode proved itself anything but a gimmick, making the kind of substantial difference that inexperienced riders in particular will appreciate.

The Enduro (75 hp) and Rally (110 hp) modes are both designed for off-road riding, but as with the road options, there is a noticeable step in power and throttle response between them.

The excellence of the switch gear and the clear, 5-inch full-color dash, combined with the sheer usability of the DesertX, made it easy for me to switch between modes on diverse terrain and trim the Ducati for all challenges. The full menu of riding modes on offer was used regularly, a rather rare occurrence. This was in part due to a 150-mile route ranging from tricky off-roading to fast sweeping asphalt linked by gnarly mountain hairpins. But it would not have happened if not for the versatility of the motor and those modes, which change the bike’s character while elevating its strengths. The common element Testastretta engine, proven in battle across a number of notable Ducatis, is a brilliantly balanced choice of propulsion for the DesertX, with all the torque and drive you’d expect low down as well as the enthusiasm and a willingness to rev when the road gets bigger.

A new steel trellis frame, hung with fully adjustable KYB suspension front and rear, works far better than it should on the grippy stuff. The DesertX is no Panigale, but it’s surprising what it lets a rider get away with, especially with such excellent electronic rider aids as a backup. That KYB setup holds the chassis well, albeit a long way above the ground, and even riding aggressively doesn’t tie it into knots. There’s more travel than “normal,” but it’s controlled and has a quality feel, allowing the DesertX to carve up mountain passes at a rapid pace.

Heading off-road and standing up on the metal pegs (with their rubbers removed) the bike feels just as much at home as it does on pavement, the transition made easy by excellent off-road ergonomics. The Ducati felt much lighter than its claimed 445-pound dry weight, and easily changed its route to stay away from a large rock, pop out of a rut, and even pop the odd little jump with relative ease. The bars don’t jolt, the fork doesn’t bottom out, and the rear stays reasonably composed even when hitting hard terrain at speed. Considering how well the DesertX performs on the road, the DesertX is also a superbly enjoyable off-road tool. Ducati has barely sacrificed any on-road performance for off-road performance or vice versa.

The off-road ABS is superb front and rear, with the adjustable rear brake pedal in the perfect position. The clever traction control will allow the rear to slide, but only up to a point. Even the reduced power of Enduro mode is enough to get the rear Pirelli working overtime, but then lean-sensitive TC takes over, and turns out to be one of the best systems yet on the dirt.

Rally mode delivers full power with reduced TC and has ABS only on the front. But again, like Sport mode on the road, this doesn’t turn the DesertX into a snarling beast like those Dakar dune busters of the ‘90s: The fueling is still excellent, and the TC still cuts in, but the safety net is a little further away. Expert riders will be pleased to know both ABS and TC can be fully deactivated should you have the space to make full use of the Ducati’s excellent chassis and 110 hp.

Cornering ABS comes as standard, with three modes to choose from, one for the road and two off-road. The ABS can also be disabled entirely. On road the ABS is so good it’s unclear why anyone would want to do so; some riders may choose to ride without ABS off-road, as the settings are very different.

Cruise control comes as standard, and with the rider sitting in the bike and not so much on it, the standard nonadjustable screen does a decent job of deflecting the wind during short highway stints. A larger screen is an optional extra, as are heated grips.

The most noteworthy accessory is the auxiliary rear fuel tank. Not only does this look trick, but it adds 2.1 gallons of fuel and 40 percent extra range. It does so by supplying fuel to the mother tank when that runs empty, and can do so on the move. The downside is that rear hard luggage can’t be fitted with the rear fuel tank, but there’s always soft luggage and roll bags.

Ducati has moved into a new market with its first 21-inch front wheeled bike of the modern era, and the competition should be worried. The DesertX’s looks, retro style, and desirability are top-notch. The engine has enough performance on road, is friendly at low speeds on any surface, and is straightforward fun. The chassis is functional, working both on and off-road. And only extreme off-road riders will find any shortcomings with the standard Pirelli Scorpion Rally STR rubber.

In short the DesertX is straight-up fun, flicking between riding modes and riding on every surface. Not many bikes are this versatile. The electronics are easy to use and personalize, and genuinely boost riding pleasure and flatter the rider, particularly off-road. The only question is the price: Is $16,975 perhaps a little too much? It will be interesting when dealers take delivery in July. 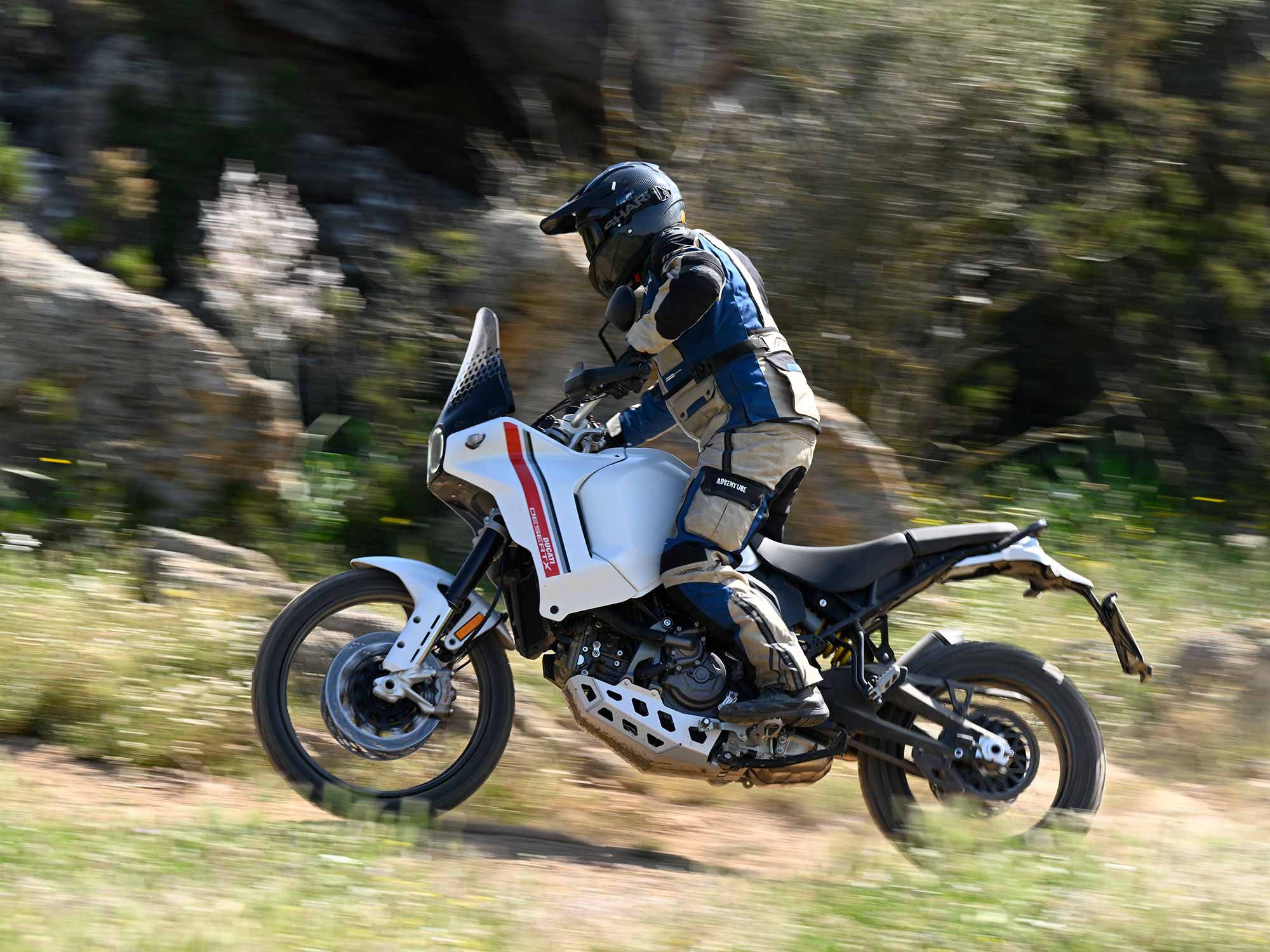 It might echo the ’90s but a huge amount of current technology has been poured into Ducati’s “retro” enduro. (Alexphoto/) 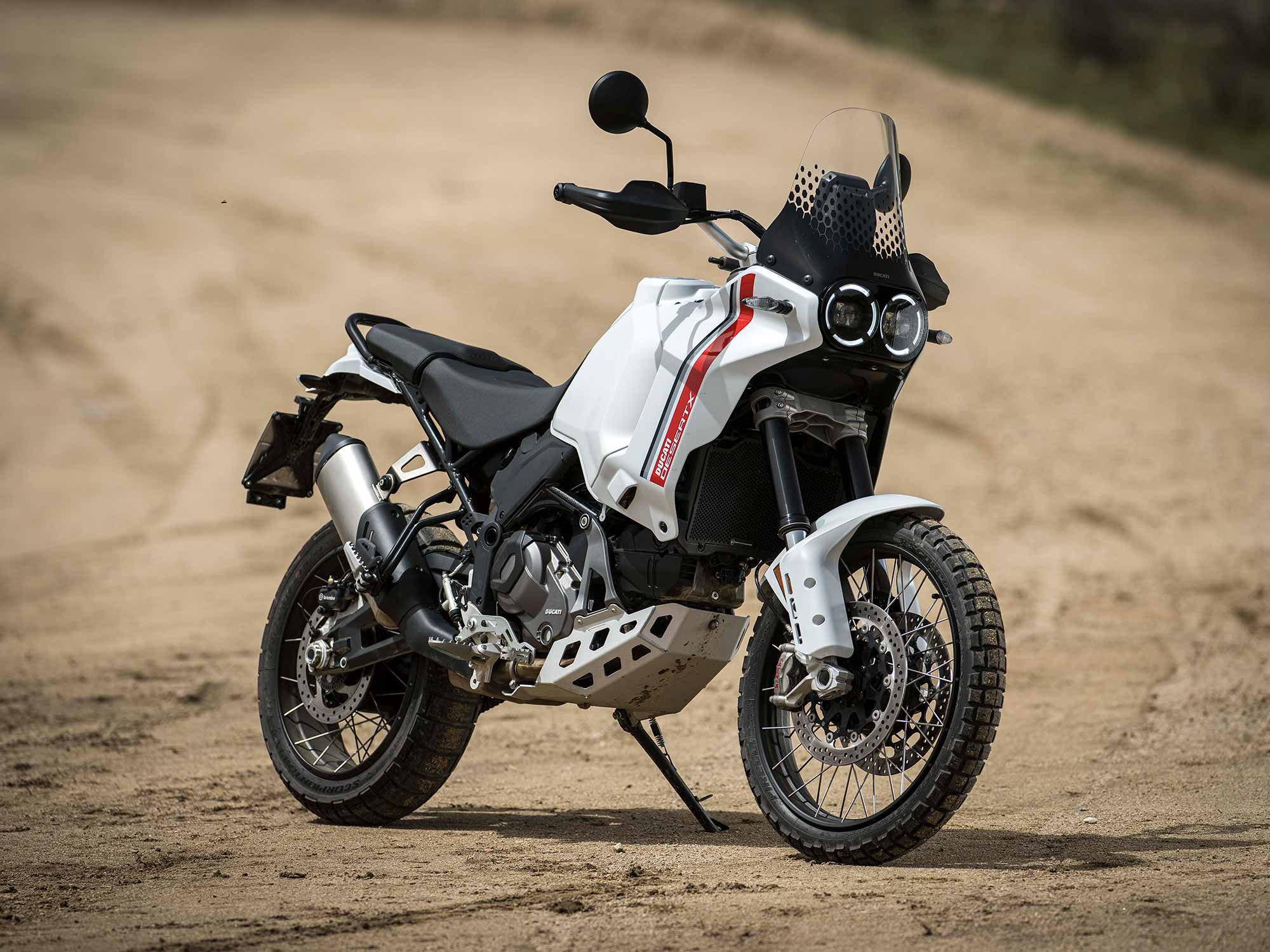 Ducati never won the Dakar, although its engines did in 1990 and 1994 with Cagiva, and the new DesertX is clearly inspired by the old-school Dakar icons. (Alexphoto/) 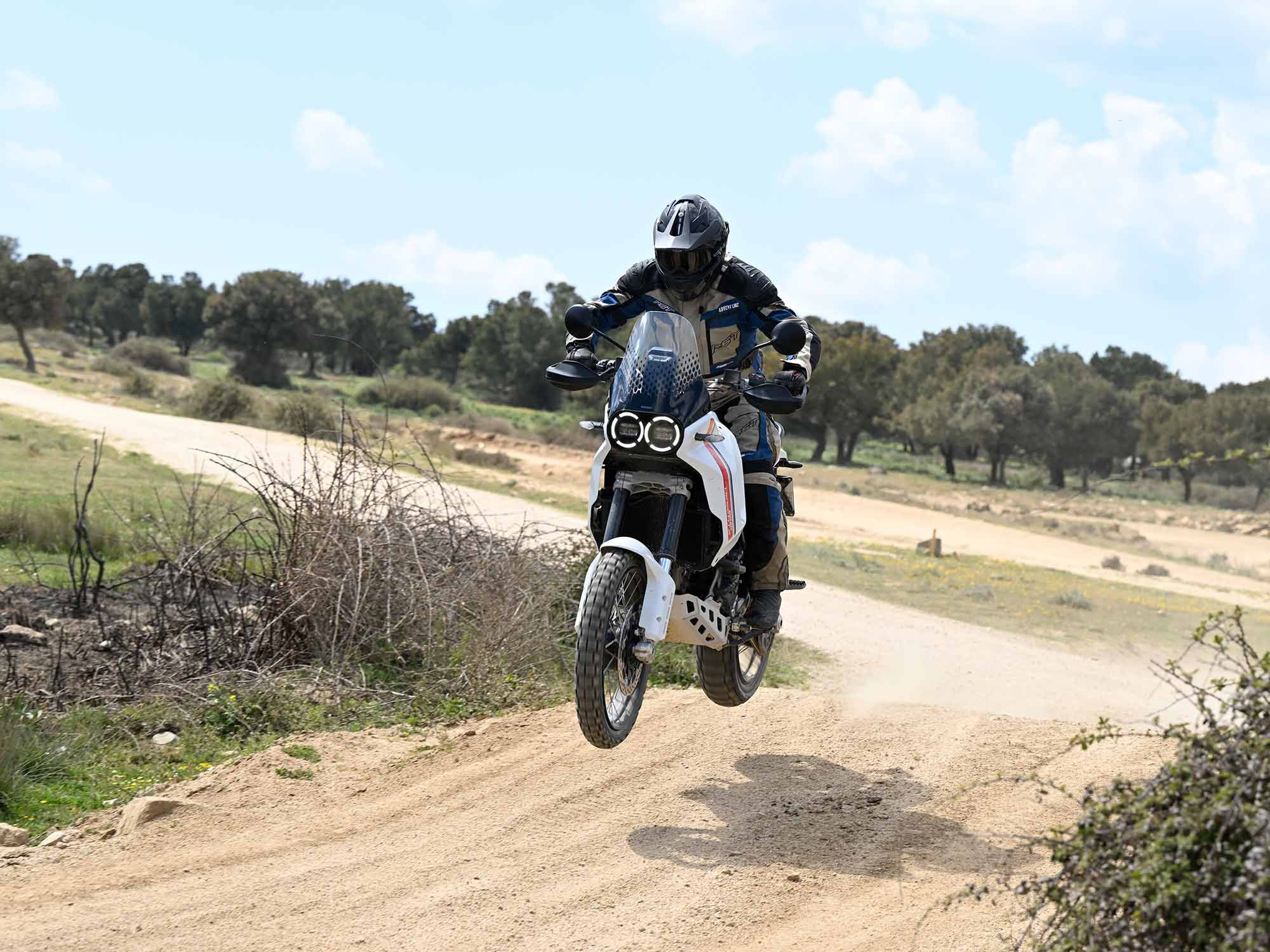 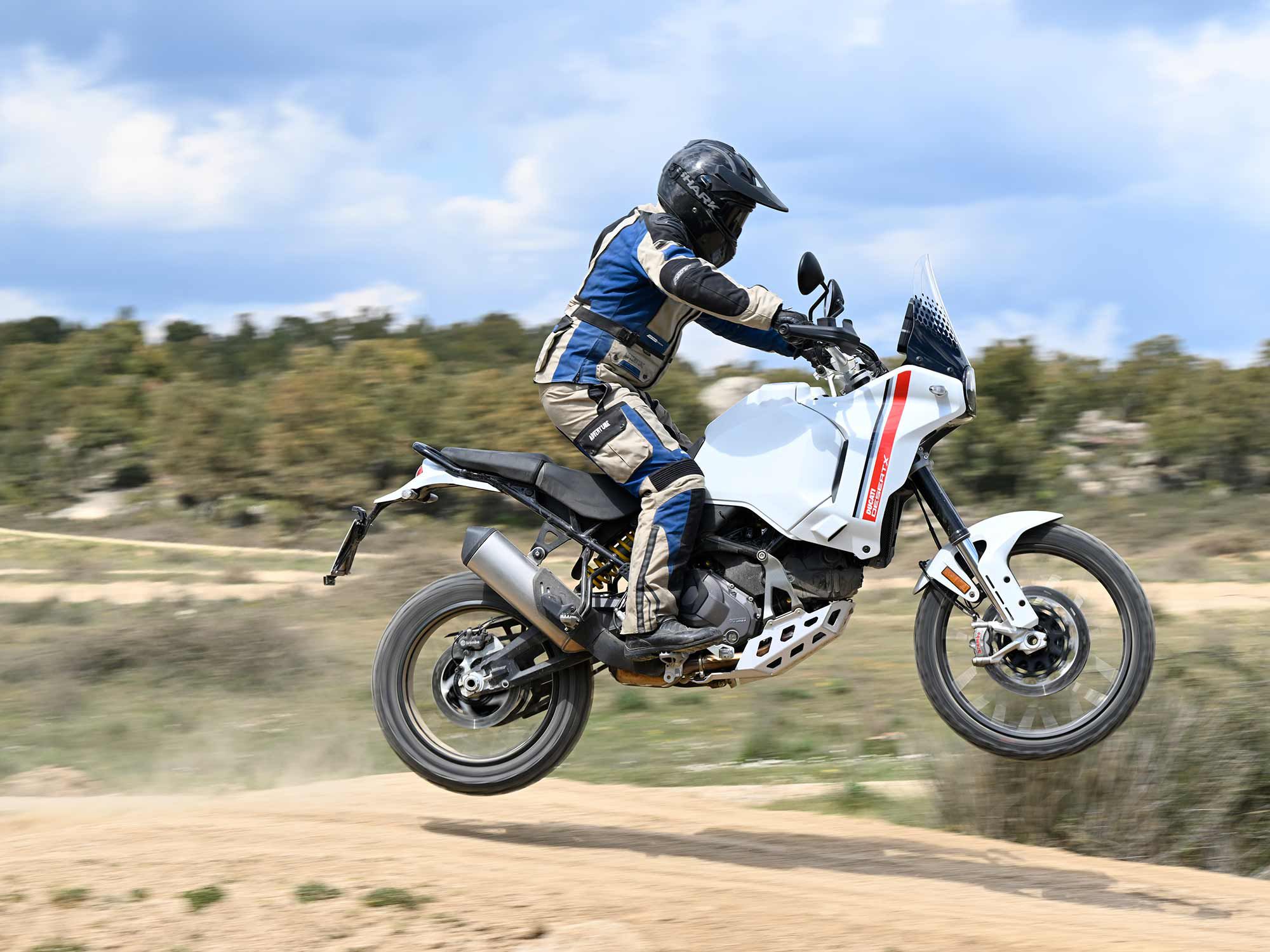 The familiar Testastretta motor can be found across the Ducati range in the Multistrada V2, Supersport 950, Hypermotard 950, and the Monster. (Alexphoto/) 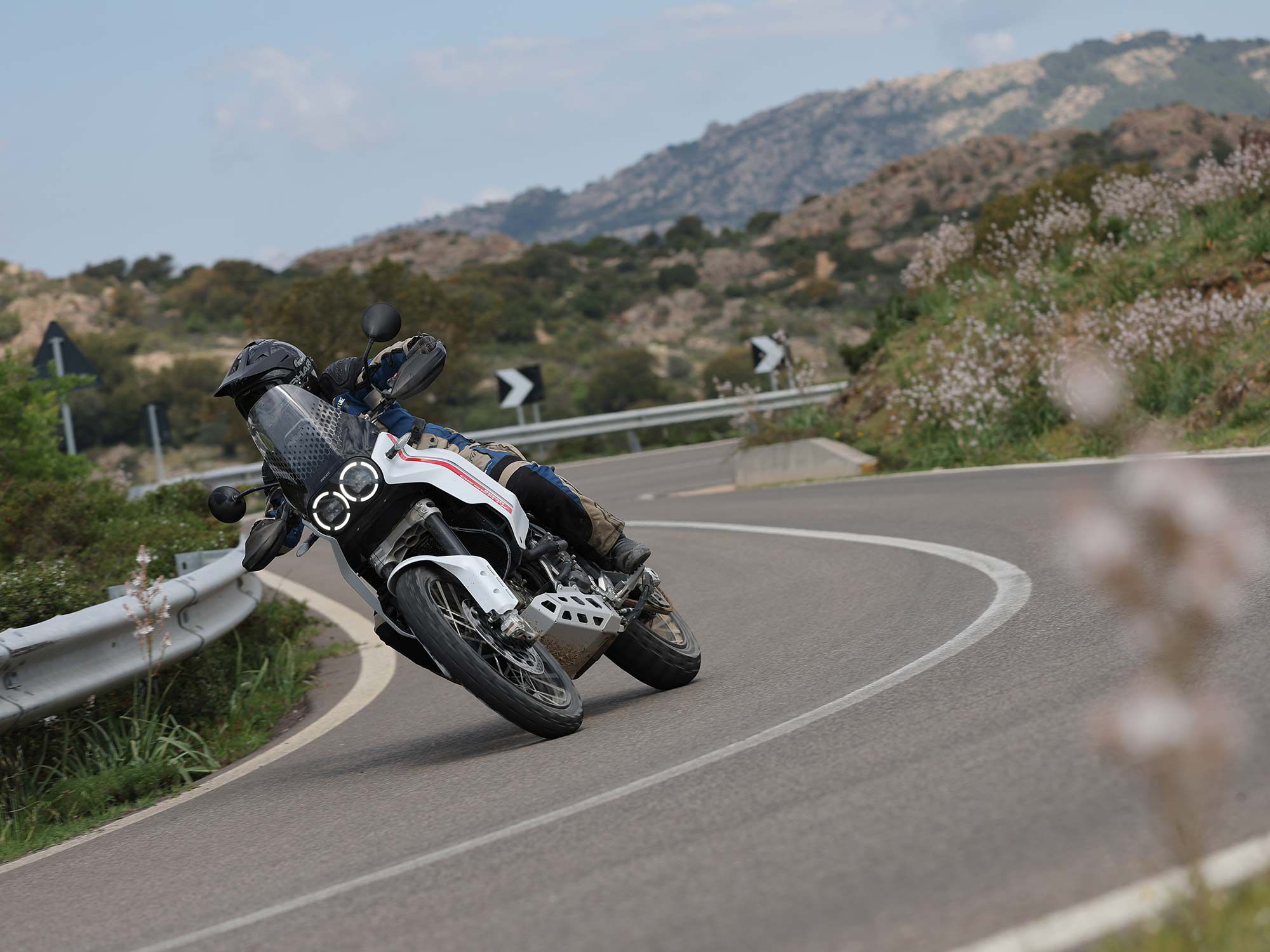 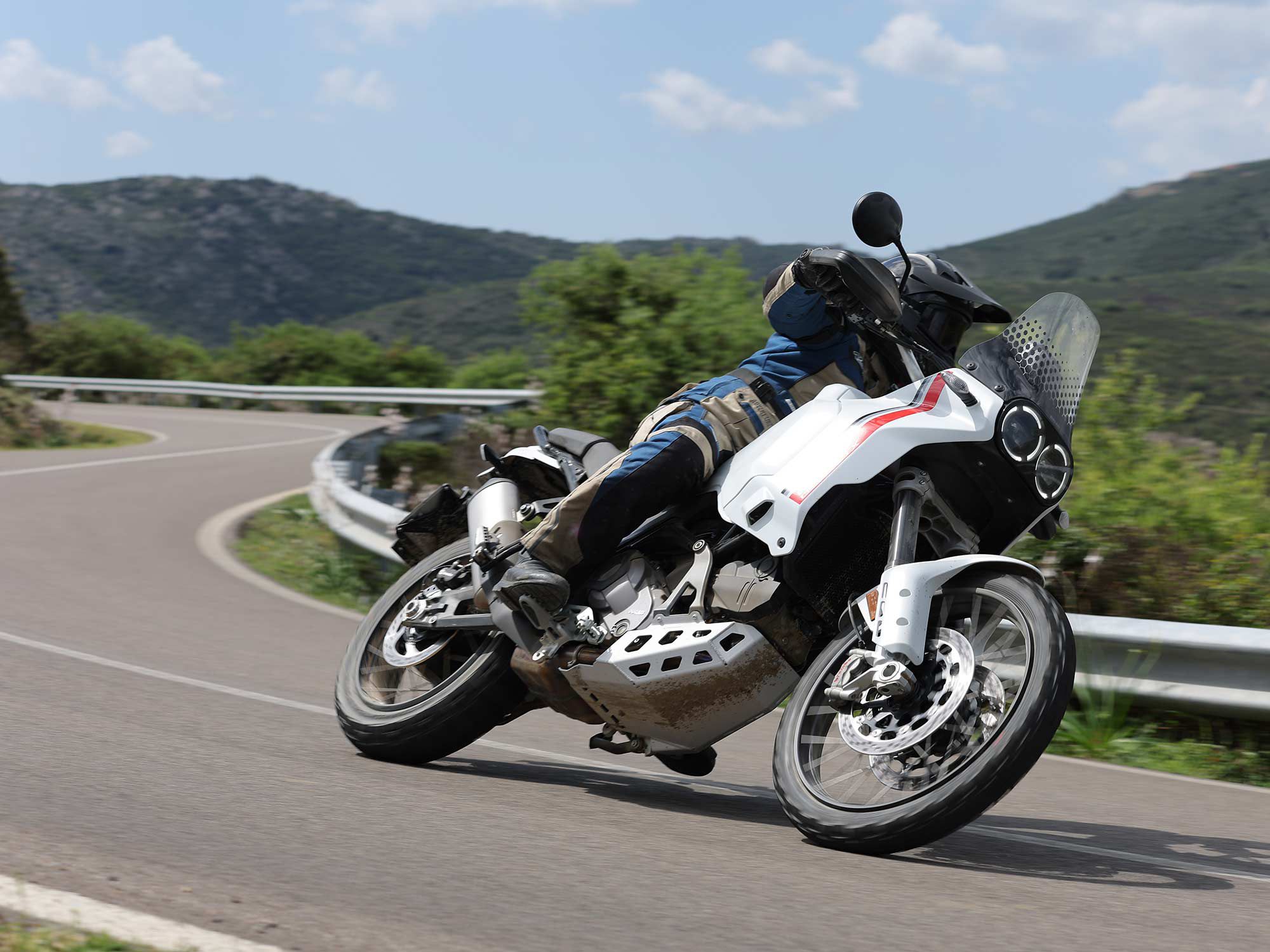 Ducati is claiming a range of 248 miles from the standard fuel tank, plus another 40 percent if you add the 2.1-gallon rear fuel tank. (Alexphoto/) 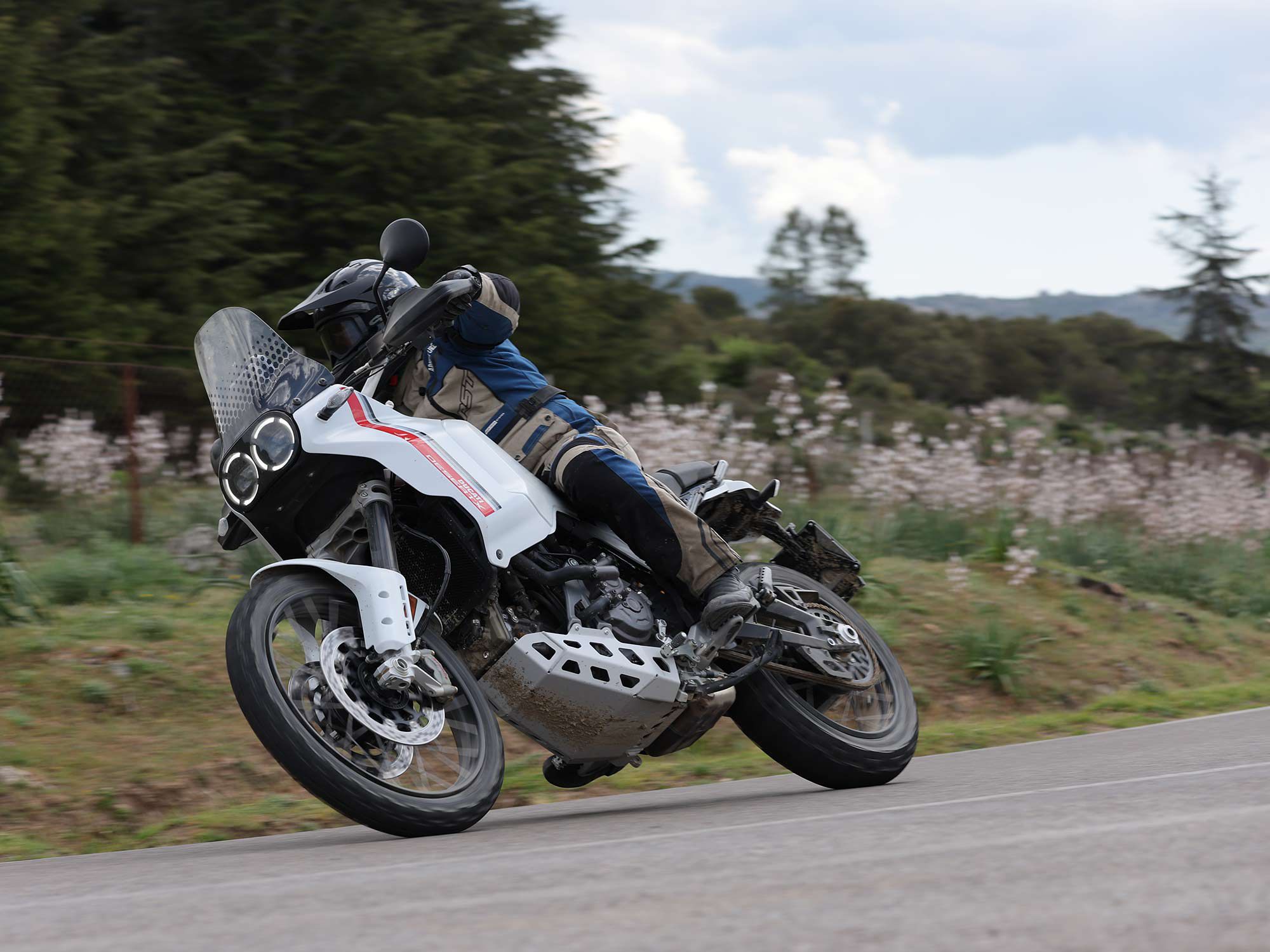 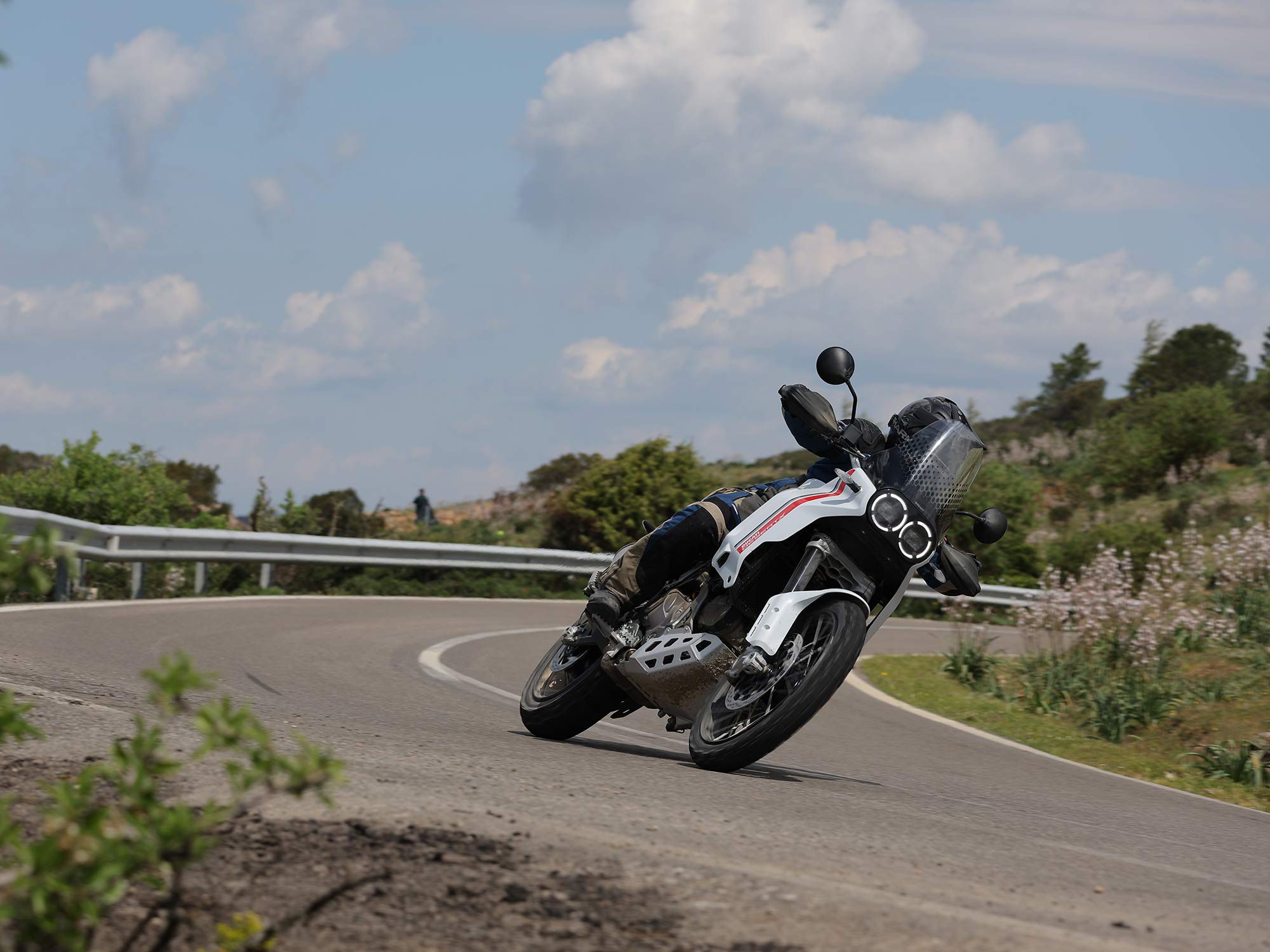 Ducati’s up-and-down quickshifter comes as standard, as does cruise control, but not hill assist. (Alexphoto/) 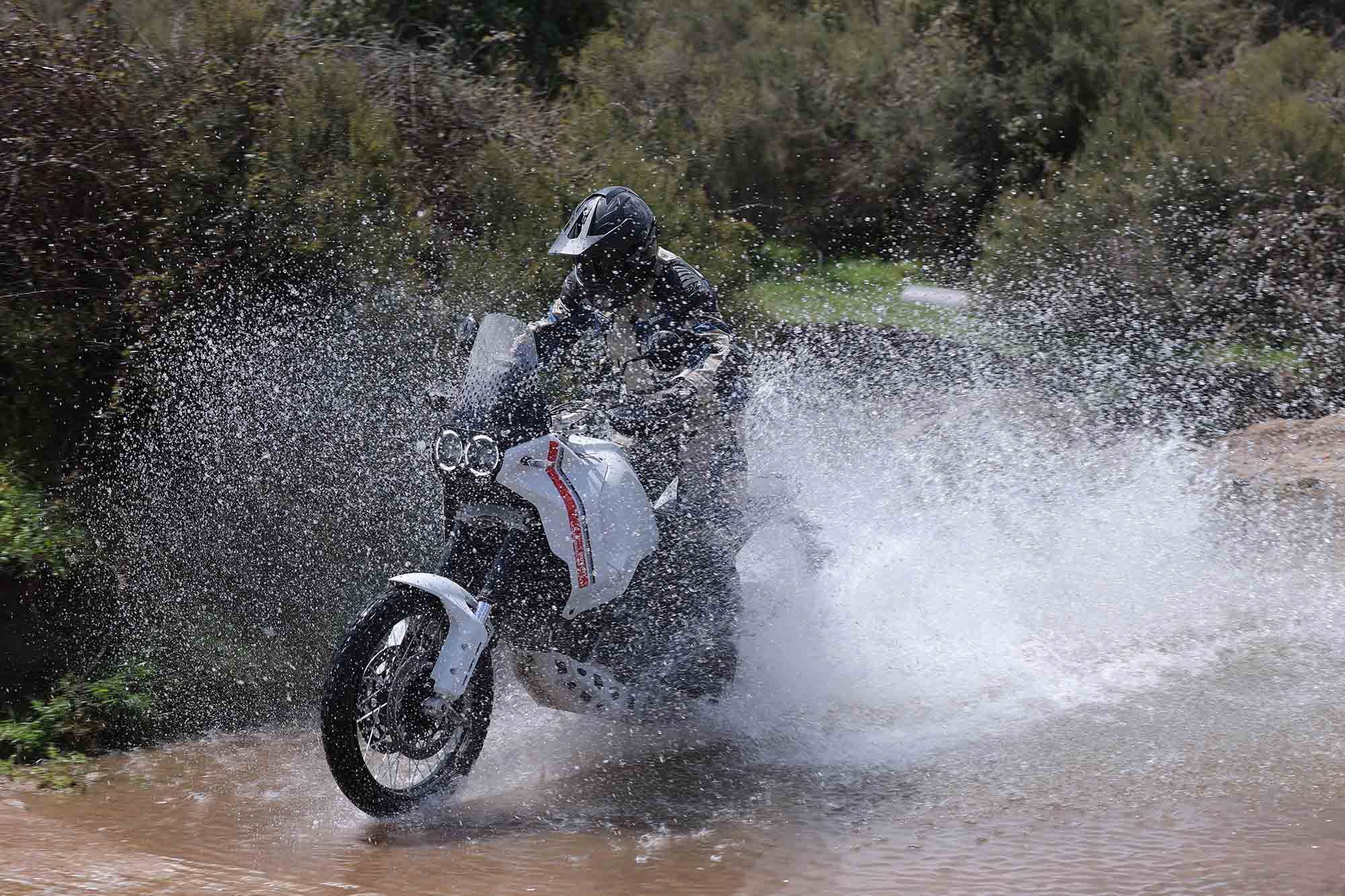 As you’d expect there is a huge list of accessories: lower and higher seats, not forgetting a Termignoni Euro 5-compliant slip-on silencer that reduces weight by 5.5 pounds and increases power and torque by 7 percent. (Alexphoto/) 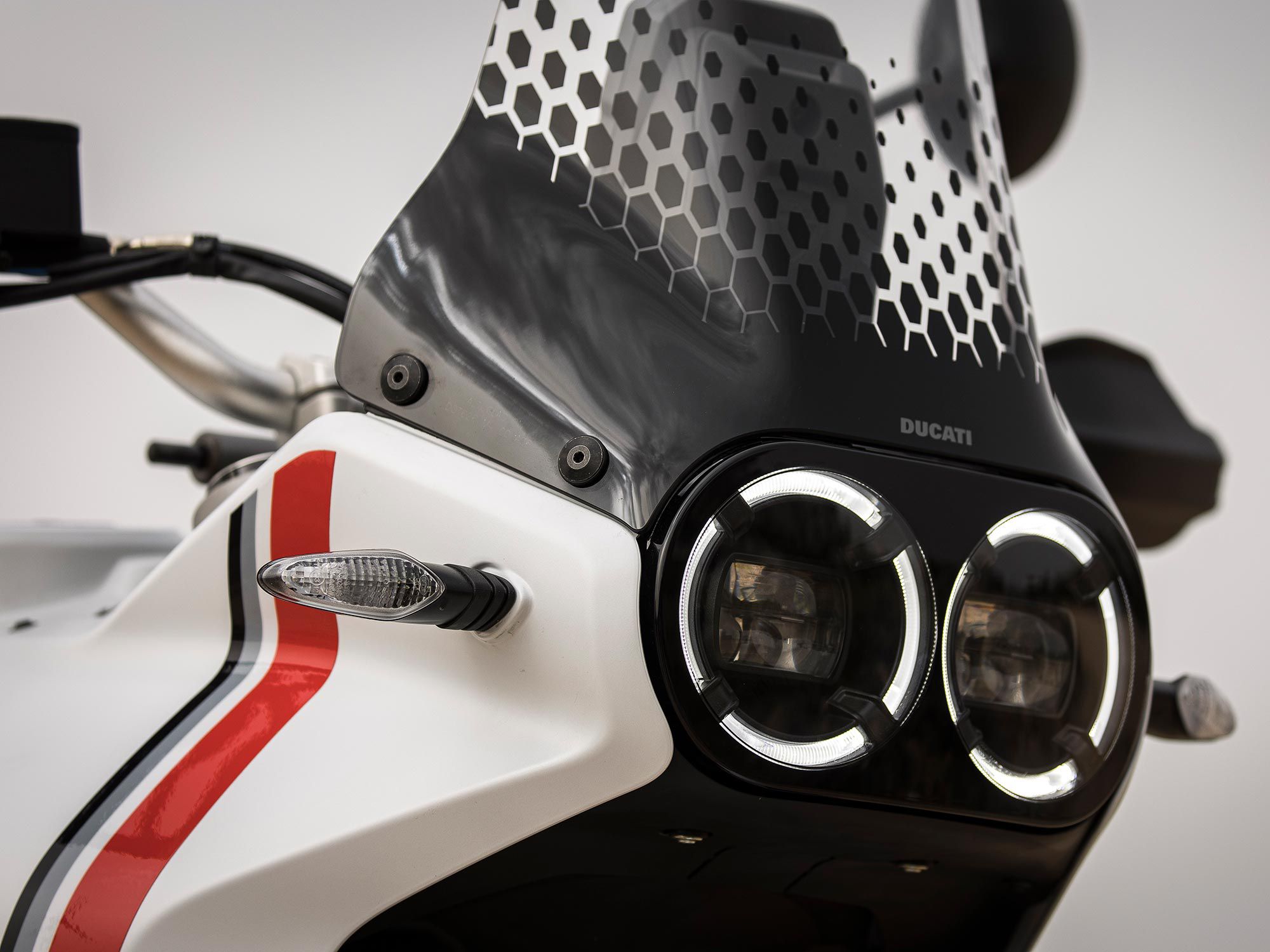 The DesertX’s is at 34.4 inches, with a low seat option at 34 inches and a lowering suspension kit at 33.3 inches. (Alexphoto/) 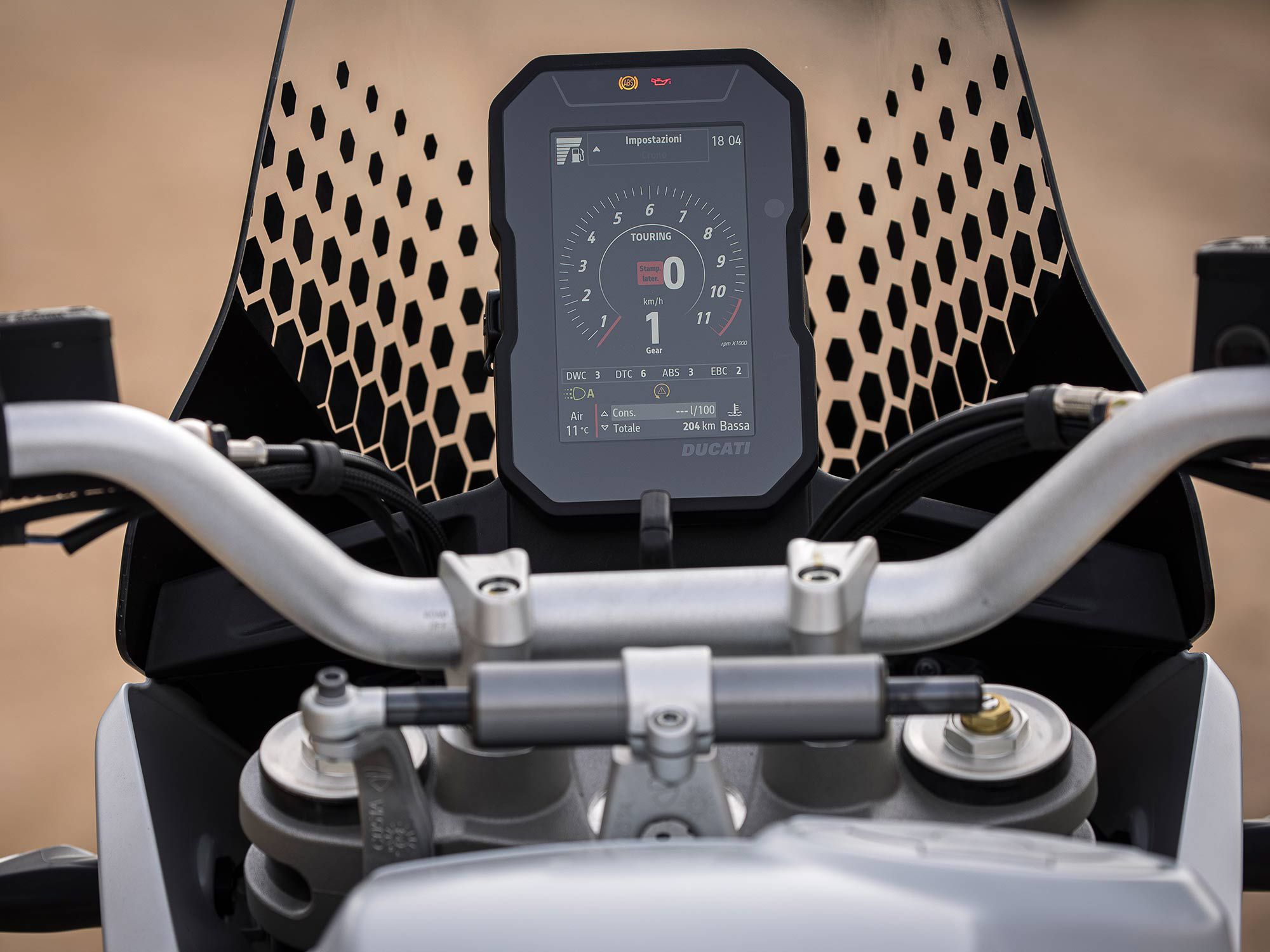 The 5-inch TFT dash is not only clear and easy to read but also attractive. There are two screen layouts, one for the road and one for off-road. (Alexphoto/)
Sign In or Register to comment.