Floyd
May 11 edited May 11 in Cars Motorcycles 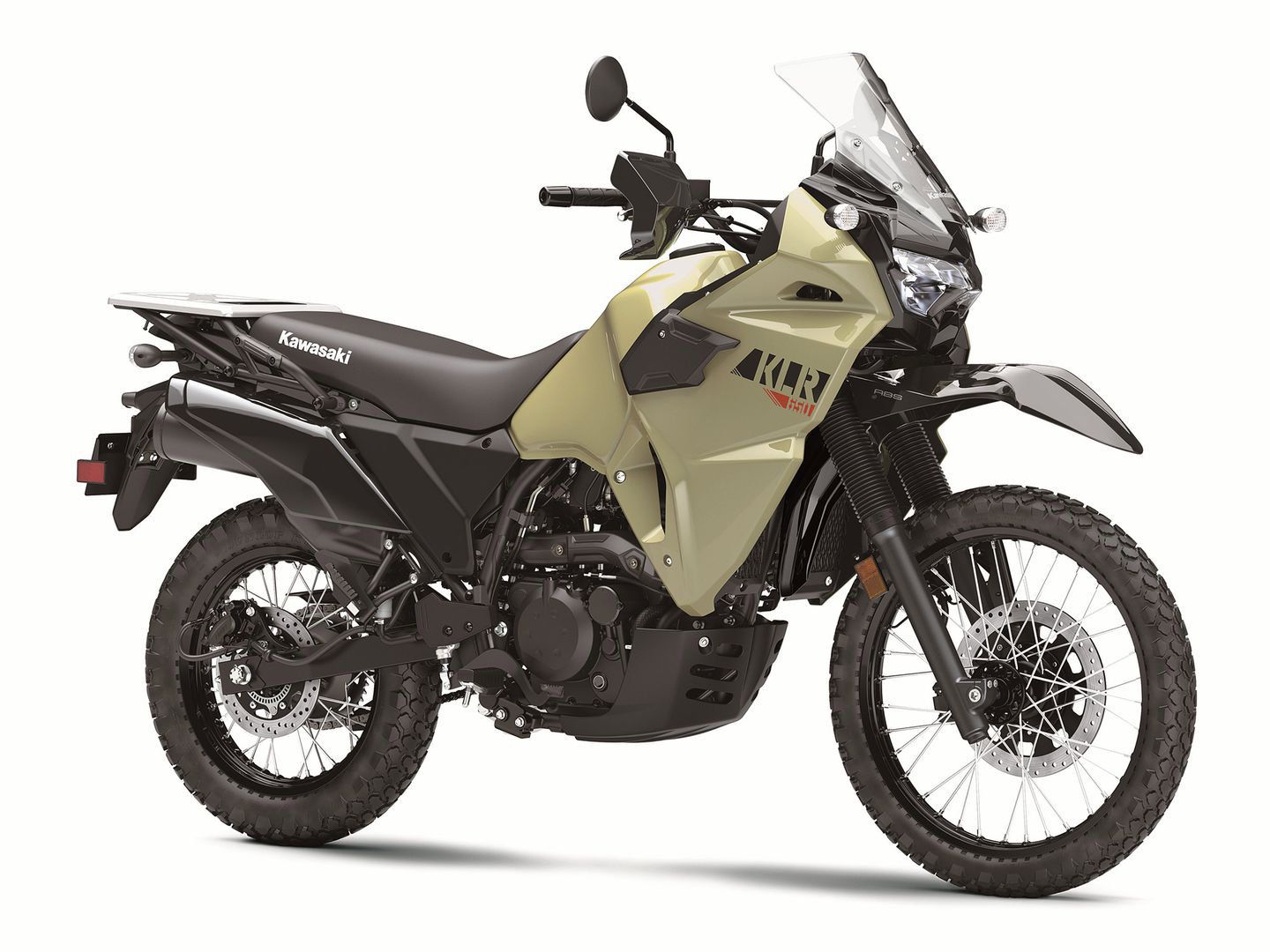 Kawasaki’s 2022 KLR650 gets another lease on life with newfangled features like fuel injection and off-road-tuned ABS. (Kawasaki/)

An affordable dual-purpose machine with an adventurous streak, the KLR650 will take you almost anywhere you can think of and get you back home with a smile on your face. Updates for 2022 focus on improving the basic functionality without starting from a blank canvas or changing the basic character that so many KLR owners have come to appreciate over the years. 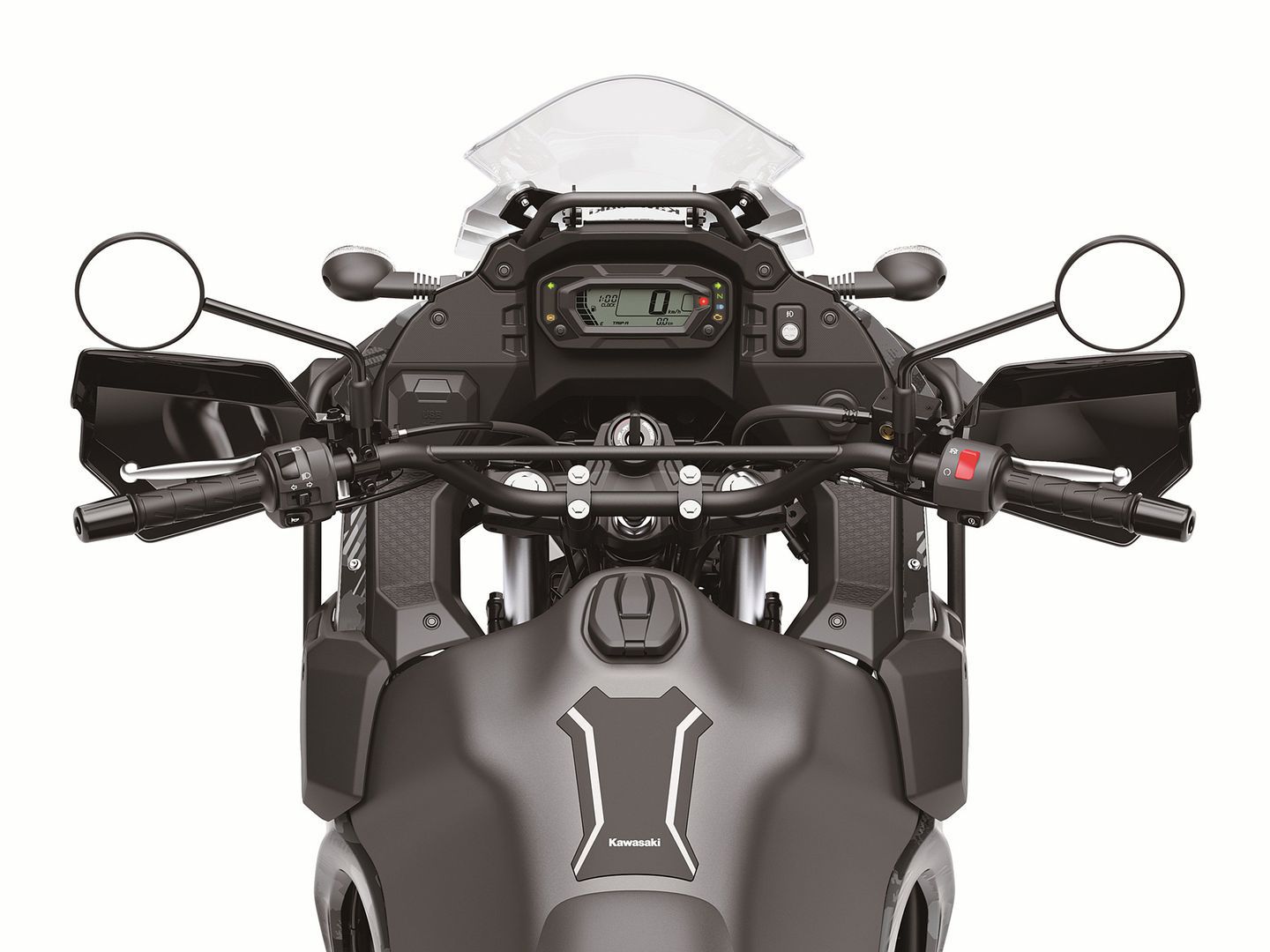 Since it was introduced way back in 1987 (not a typo), the KLR650 has stood the test of time as other brands, even Kawasaki itself, built more focused models for every siloed aspect of adventure riding. ADV riding wasn’t even a thing back in ‘87, but over the years the KLR650 has grown from a bike perfect for everything from backroad exploring to touring to much, much more.

KLR650 buyers have resisted change for years, and one could argue that there was little reason for a newfangled design with shiny embellishments. At the same time, progress has to eventually march on. In the case of the 2022 KLR650, the team at Kawasaki focused on refining a trusted friend. The basic core remains very much a KLR, with a liquid-cooled 652cc single pumping out predictable, manageable torque and providing good traction through a heavy flywheel. The gearbox is still a five-speed unit, although tweaks have been made for better reliability.

As before, the KLR650 is a bit on the hefty side, weighing in at a claimed 483 pounds. But that steel frame, hung with suspension that provides supple damping, will help you pick your way through the rough stuff. Just don’t expect to charge into a rock garden like you’re on a competition enduro model.

When it comes down to it, the KLR is still a KLR, a jack of all trades but master of none. And that’s not a criticism. The KLR is what it is, an affordable and above all fun tool that will take you on any riding adventure you want without fuss. Digital fuel injection with a 40mm throttle body heads the list of updates, while revised intake and exhaust cams are said to boost midrange torque. The 2022 model gets increased generator capacity to help power accessories such as heated stuff and GPS units. Improved and firmer suspension settings combine with revised chassis geometry for more stable handling. Highlighting the importance of stability, Kawasaki went a step further by incorporating a 30mm-longer swingarm into the design, as well as increasing rake by 2 degrees (30 degrees versus 28 degrees). There’s also a touch more trail (8mm).

Revised brakes include off-road-tuned ABS and a 20mm-larger 300mm front disc plus a 1mm-thicker rear disc. New creature comforts include a fuel gauge on the new LCD dash, updated and revised bodywork and available luggage, wider mirrors, a wider rubber-mounted handlebar, and a taller and more protective windscreen sitting over a new LED headlight. 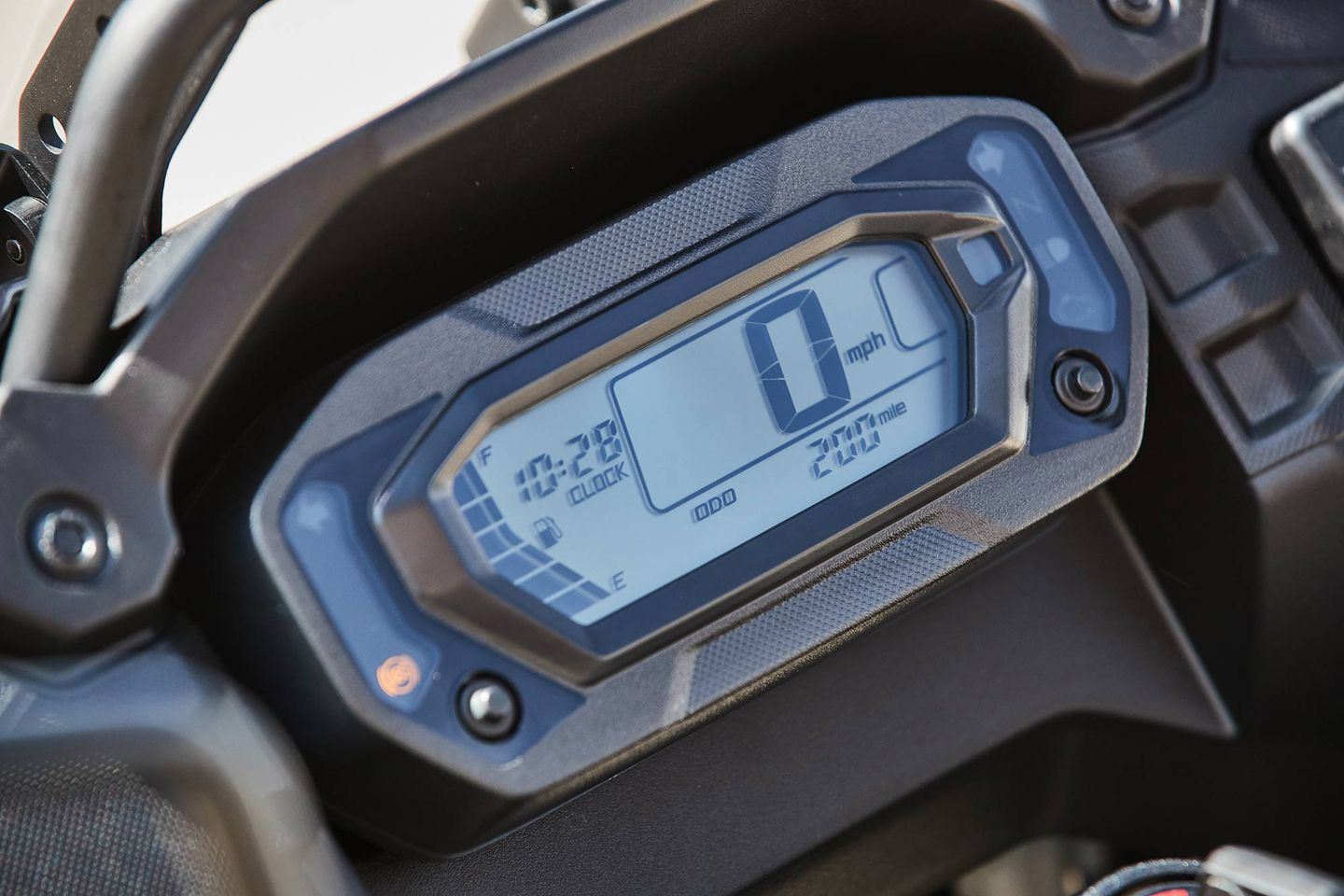 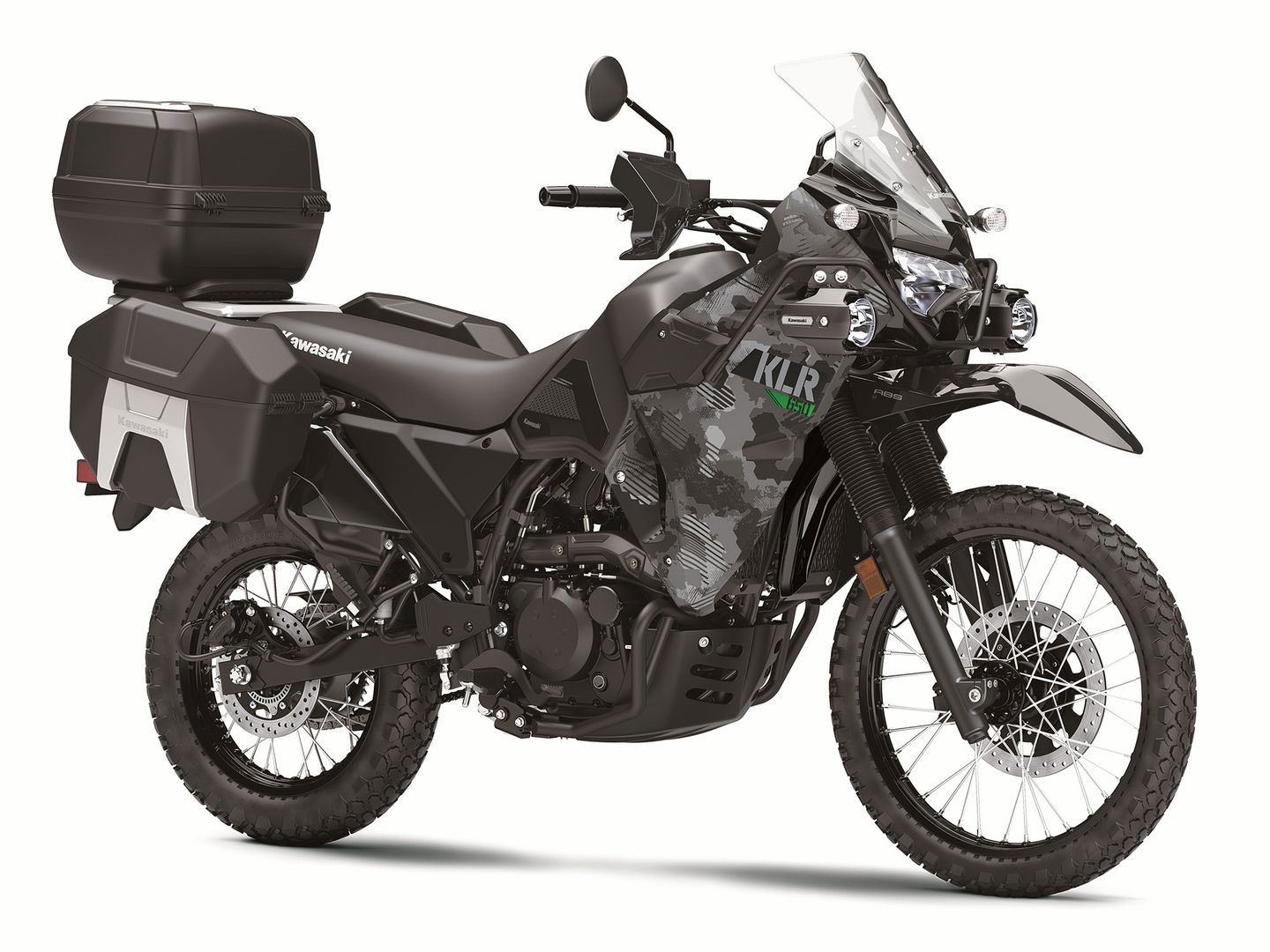 The 2022 KLR650 Adventurer (shown in Cypher Camo Gray) comes with side cases, fog lamps, frame sliders, and more. The top case is standard on the KLR650 Traveler model. (Kawasaki/)

The liquid-cooled four-valve 652cc DOHC single-cylinder engine is as tried and true as any engine out there. Bore and stroke measure 100.0 x 83.0mm. Fuel is delivered by a 40mm throttle body and DFI. Power is sent to a five-speed transmission. Kawasaki doesn’t quote horsepower, but torque is rated at 39.1 pound-feet at 4,500 rpm, and that’s all that really matters anyway.

On its First Ride Review, Cycle World said: “The fuel injection is a hit. The bike ran perfectly everywhere from about 6,000 feet of elevation to nearly 10,000. [The bike] has reasonable low-end torque, but it signs off pretty early; rev it and nothing much happens. We wound up on the interstate; while 80 mph is at the upper end of the bike’s legs, its air management is good and the engine has minimal vibration for a big single.

“The KLR is also equipped with oldest-possible-school traction control: a heavy flywheel. The inertia in the motor makes spinning the tire difficult, so electronic aids aren’t needed. The gap from first to second gear is wide, but short of adding a sixth gear, there might not be a better answer.” 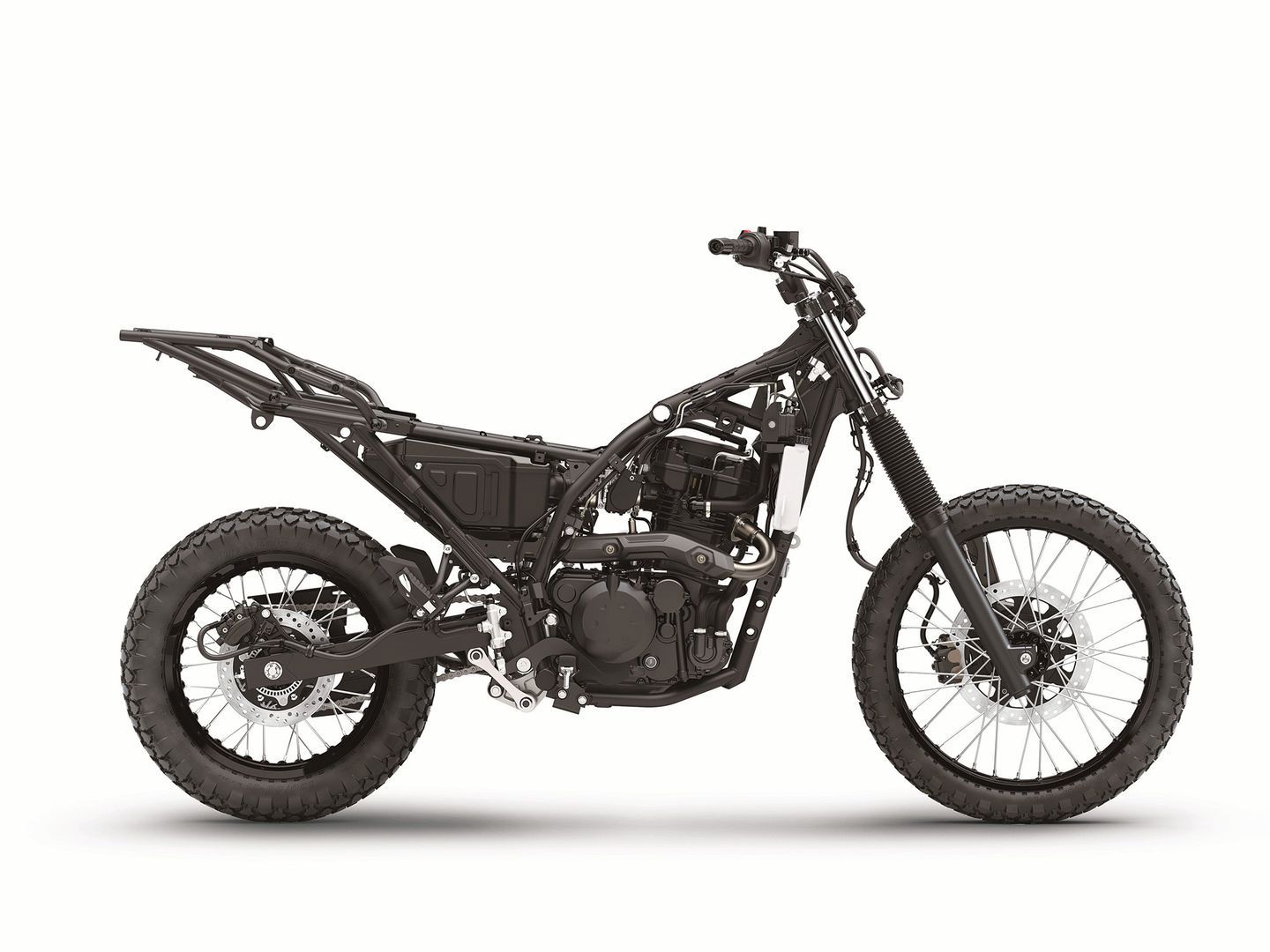 The changes Kawasaki made to the 2022 KLR650 chassis make the bike more confident in line selection. Stability is much improved altogether. (Kawasaki/)

The chassis changes have successfully improved the bike’s feel. The old model had a tendency to follow pavement seams, but the changes Kawasaki made to stiffen the new bike make it more confident in line selection. The suspension is comfortable, if generally unremarkable, on the road; once onto dirt, it does a good job of absorbing low-speed bumps. Get too enthusiastic and it will bottom on even relatively mild obstacles, so it’s best to set a moderate pace.

The new tuned-for-off-road ABS and upgraded discs front and rear get good marks. The ABS is good too; it’s not as intrusive as some systems, and accomplishes exactly what it is supposed to.

Cycle World does not have miles-per-gallon figures available for the 2022 Kawasaki KLR650. 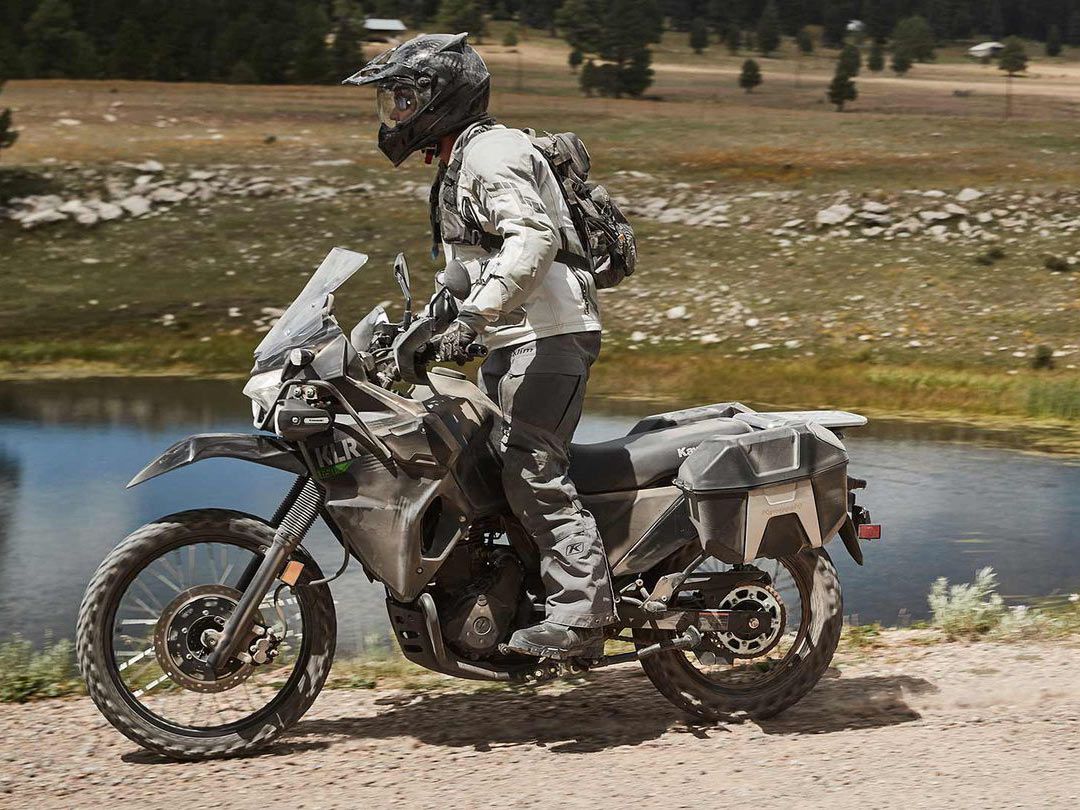 The shifter is close to the peg and cannot be raised without hitting the case, so a motocross boot will not fit beneath it to make an upshift; and the peg position is forward, so the standing position is cramped. The pegs are covered in rubber, meaning they’re slippery when wet. They’re also rubber-isolated from the frame, so putting your weight on them by standing makes them flex down to the point where your foot wants to slide off. On the better side, the new adjustable windscreen gets good marks for providing buffet-free wind protection on the highway.

Like most things about the KLR, things are pretty simple. The bike gets off-road-tuned ABS, LED headlights, and a digital dash interface, while optional USB ports are available.

Kawasaki offers a 12-month standard warranty, which can be extended by 12, 24, 36, or 48 months with the optional Kawasaki Protection Plus plan.

Bikes like the KLR650 don’t last for 34 years for no reason. Need we say more?