Floyd
May 10 edited May 10 in Cars Motorcycles

Can-Am surprised the powersports world with the introduction of its original Spyder trike 15 years ago. Featuring two steering wheels up front and a belt-powered rear drive, the Spyder is designed for powersport riders seeking something different. The 2022 Can-Am Spyder RT Limited ($27,499) is positioned as a luxury-touring three-wheeled motorcycle. Think a cross between a convertible-style automobile and a cruiser-style streetbike.

Editor’s note: We have reported on the Spyder RT’s technical improvements in the 2020 Can-Am Spyder RT First Look Preview and 2021 Can-Am Spyder RT Sea-to-Sky First Look Preview write-ups. Legal restrictions and vehicle classification vary from state to state. Review your state’s local laws before operating this vehicle on public roads. In California, the Spyder is defined as a three-wheel motorcycle. Operators need a standard Class C driver’s license and a DOT-labeled helmet.

Swing a leg into the cockpit and you’ll be impressed with its posh accommodations for rider and passenger. The seats are broad, thick, and well supported. The Spyder RT is inherently stable at a standstill so there’s no kickstand. An electronically actuated parking brake prevents the 1,000-plus-pound RT from rolling away. Twist the good ol’ fashioned mechanical key and the unit powers on.

Next hit the mode button (confirming that you have read the safety information at boot up), flip the ignition switch to “on,” press the right-hand-side-mounted foot brake (linked to all three brake calipers), press the starter button, and the 1,330cc inline-three fires to life. A six-speed semi-automatic transmission does away with a conventional clutch lever.

Instead the rider notches the gearbox into each cog with a pair of buttons on the switch gear. Curiously, there is no automatic upshift mode. However, the vehicle automatically downshifts as it slows. Shift actuation is a tad slow and we’d like to see Can-Am add a fully automatic setting.

The Rotax-manufactured inline-three is a huge improvement in terms of acceleration, smoothness, sound, and overall character versus the old RSV1000-based V-twin on the original model. Throttle response is responsive, but not overly so, and it’s easy to get a feel for the powerband. We do wish Can-Am would integrate greater adjustability, with the ability to modify throttle response and ABS level based on rider preference.

Although engine power is soft off the bottom, we appreciate the strong midrange torque which helps Spyder riders pass slower traffic and tackle steep inclines. Top-end power rush is nothing to write home about, but that’s OK based on how plump midrange torque is.

There’s a hint of engine vibration at a highway cruising pace (3,200 rpm in top gear) but it isn’t excessive. Fuel mileage-wise, we measured 33 mpg which nets a range of around 231 miles based on the 7-gallon capacity of the fuel cell. One gripe: Can-Am asks its owners to run premium fuel. However the engine doesn’t offer the caliber of performance typically associated with premium gas (Honda’s Gold Wing for example, runs on standard 87-octane).

The Spyder impresses with its low speed maneuverability, especially for a vehicle of its size. Although classified as a motorcycle, the Spyder feels nothing like it. Instead it feels like a cross between an ATV and a sit-down personal watercraft.

Electronic power steering ensures light and responsive steering, and the Spyder RT is always ready to turn—perhaps too much so. One gripe: The front wheels constantly hunt for low spots in the road. This in turn necessitates constant handlebar input to keep the RT tracking where you want it to go. It’s acceptable when riding within the posted speed limit. Outside of that though, the Spyder feels nervous.

If you’re not in a hurry, the Spyder delivers a nice comfy ride. We love its relaxed ergonomics, long floor boards, big comfy seat, broad front end, and windscreen that cocoons the rider from the elements. Heated hand grips and seats make for added comfort in chilly and/or wet weather. Cruise control helps straight-line miles melt away with ease. We also like its booming Bluetooth-compatible stereo, which is easily one of the loudest and clearest-sounding setups on a motorcycle.

A color dash keeps tabs on vehicle vitals, but the display should be larger. With its small fonts, it’s difficult to read while riding and is positioned in such a way (too low) that it takes your eyes off the road ahead. Tactile feel of the switch gear could be improved on, and the processing power of the electronics could be faster too.

No complaints in the storage department; the Spyder RT swallows nearly three times more gear than a Gold Wing Tour. Braking performance is vastly improved over previous versions and we love the stopping power of the triple disc hydraulic disc brakes. Although ABS is standard, it would be nice if Can-Am offered adjustable ABS modes, based on rider preference.

For those with limited mobility, the Spyder certainly bridges the gap between convertible automobile and motorcycle. It also excels at leisurely cruising with a companion. It treats its riders with a regal straightline ride and has plenty of cargo capacity for extended touring adventures, as compared to a traditional motorcycle. We also value its edgy styling and pleasant silhouette. However, for those who seek any whiff of sport attitude, the Spyder comes up short with its nervous handling at speed and clunky shifting and electronic countermeasures. The Spyder RT offers a cozy cockpit. We love its broad front end, which does a fine job of shielding the rider from the elements. Instrumentation, however, needs to be larger. (Joseph Agustin/) 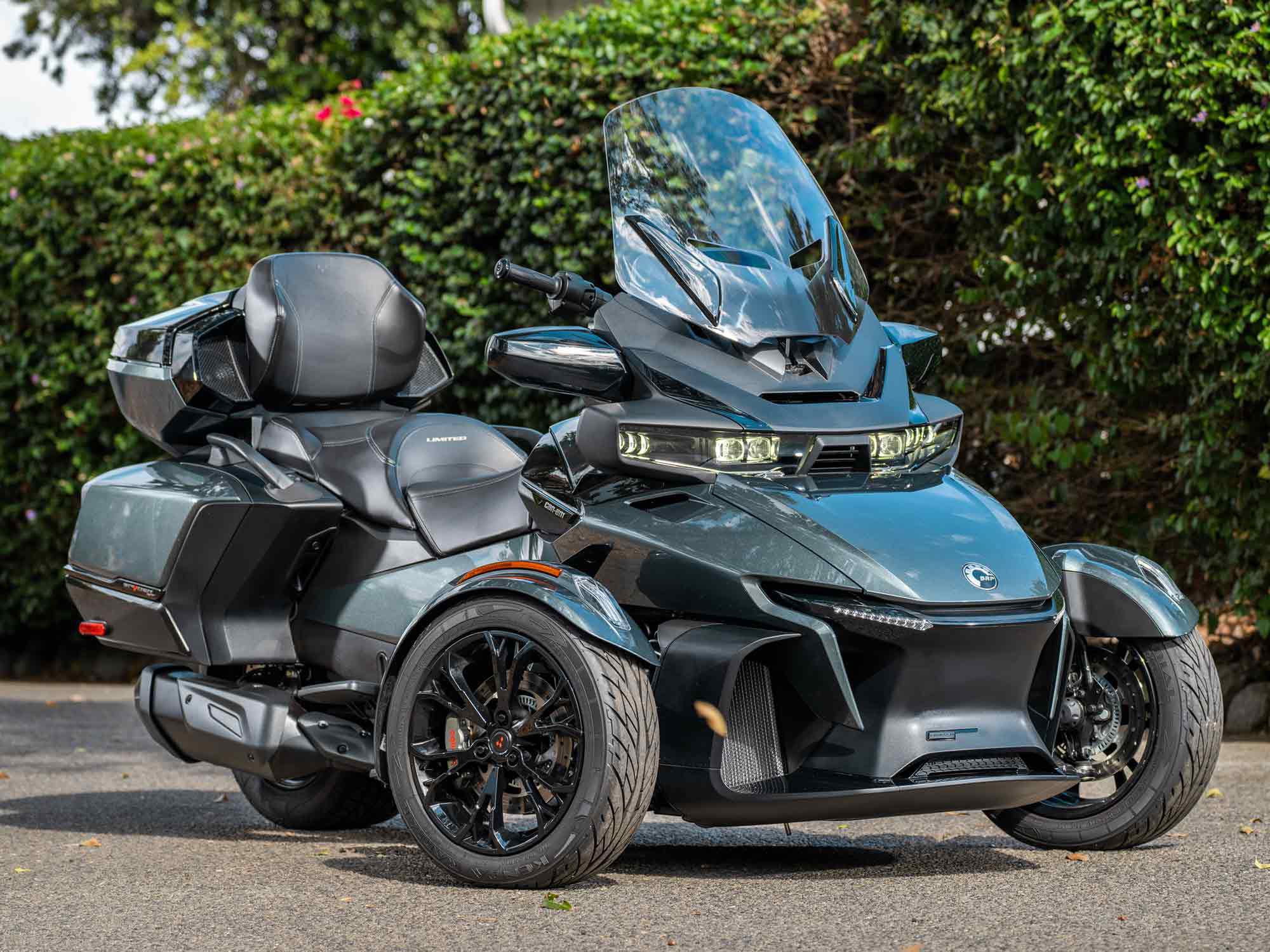 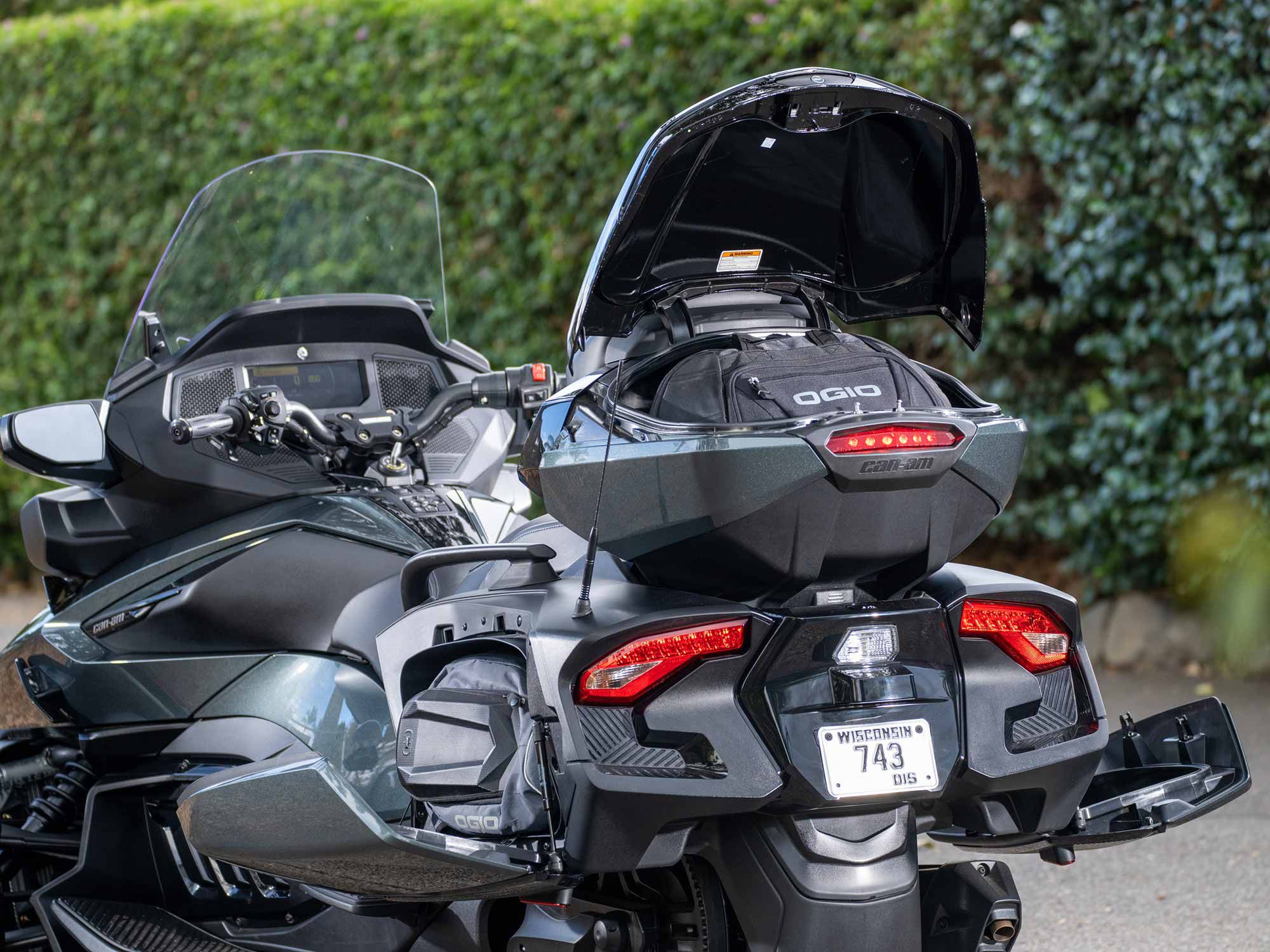 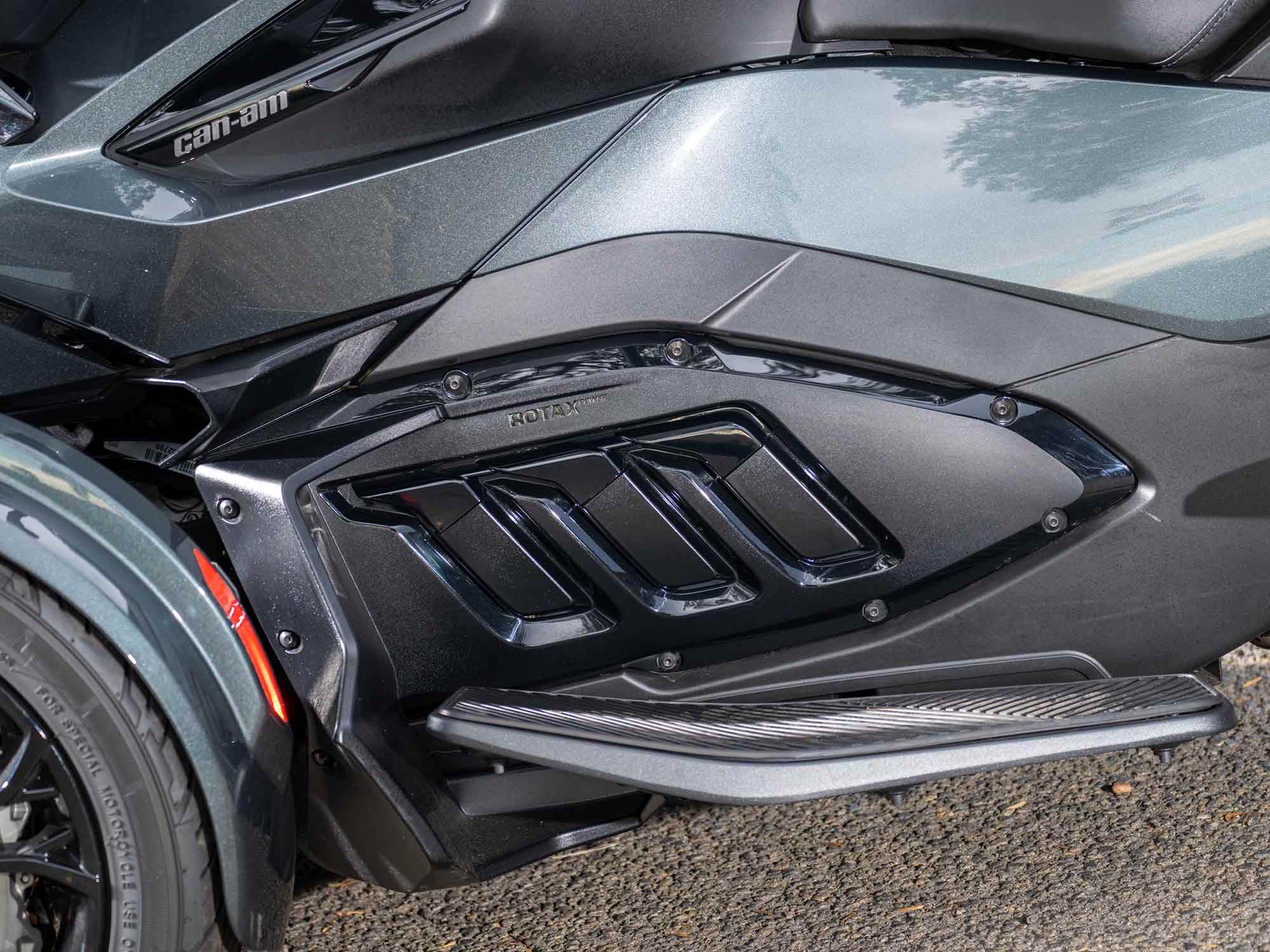 Although covered in plastic, the 1,330cc Rotax inline-three is a huge improvement versus the previous generation’s V-twin in terms of acceleration, sound, and overall character. (Joseph Agustin/) 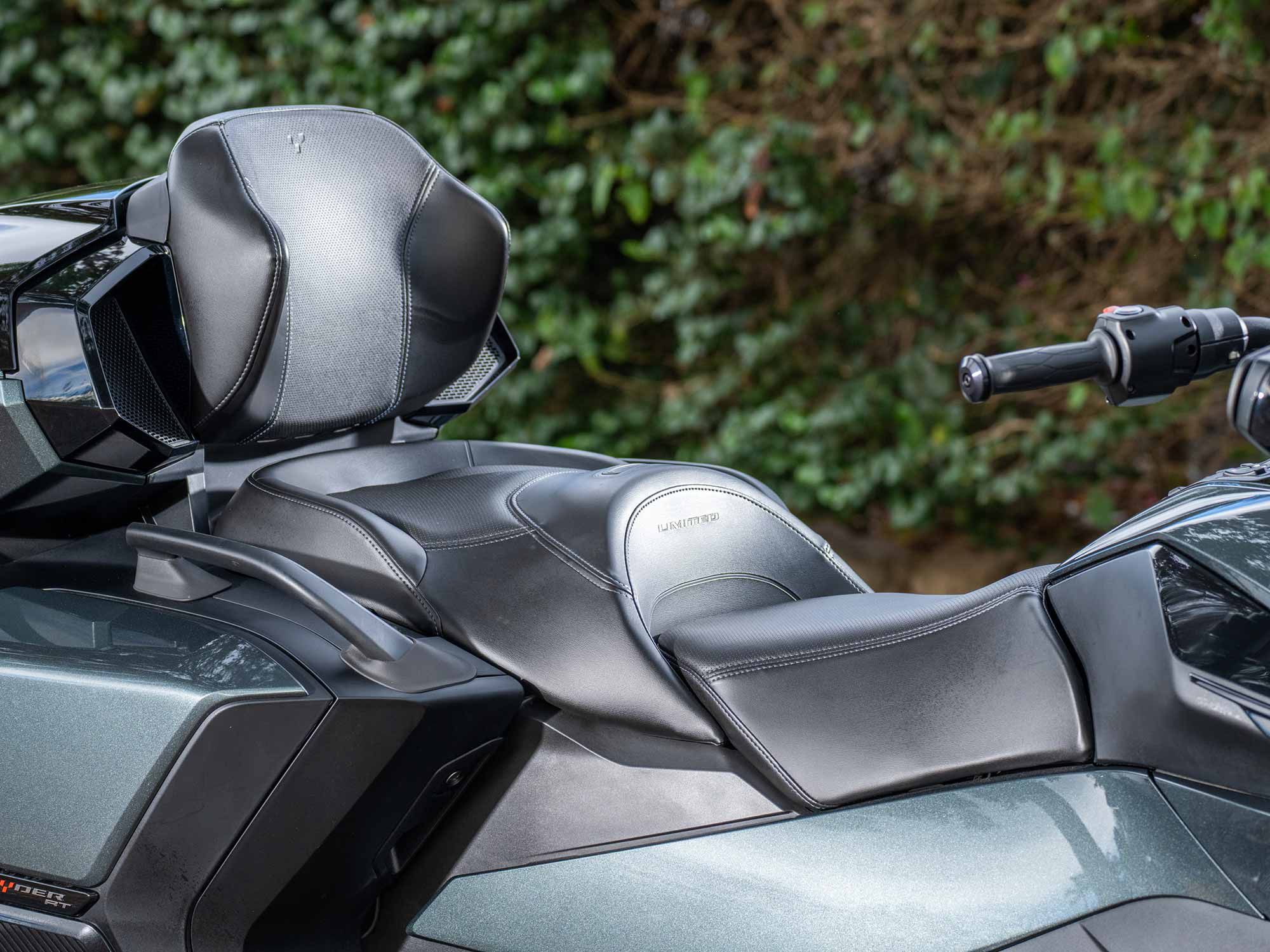 Can-Am certainly delivers in the comfort department. Straight-line miles melt away with ease aboard the Spyder RT Limited. (Joseph Agustin/)

Linked triple-disc hydraulic brakes do a fine job of slowing down the nearly 1,100-pound Spyder RT Limited. The brakes are actuated by a right-hand-side foot pedal. (Joseph Agustin/) 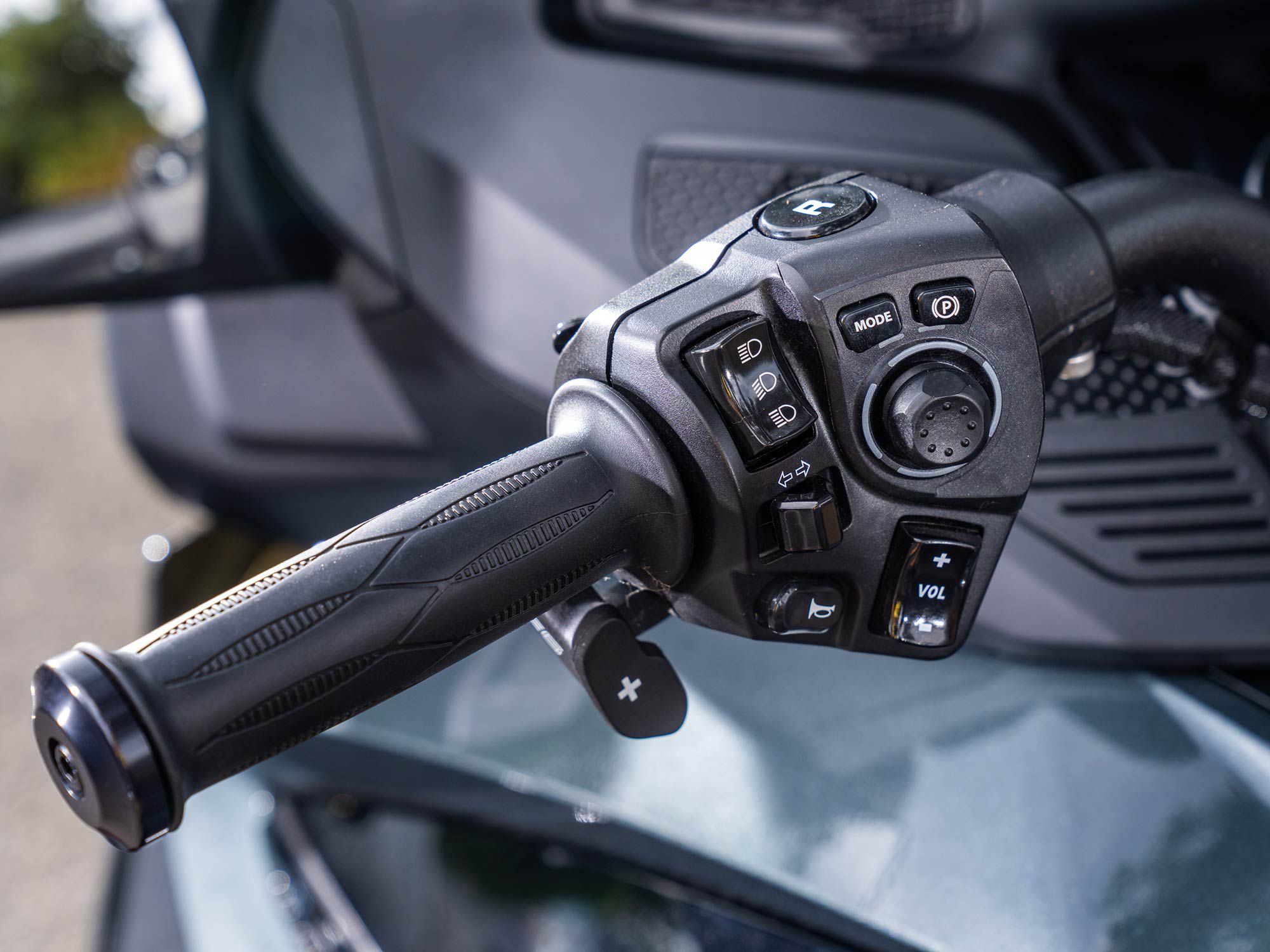 As usual, Can-Am still has some work to do in the fit and finish department. The switch gear lacks a degree of tactile precision. (Joseph Agustin/) We’re big fans of the Can-Am’s traditional mechanical ignition key and its stereo control placement that make it easy to use while riding. (Joseph Agustin/) 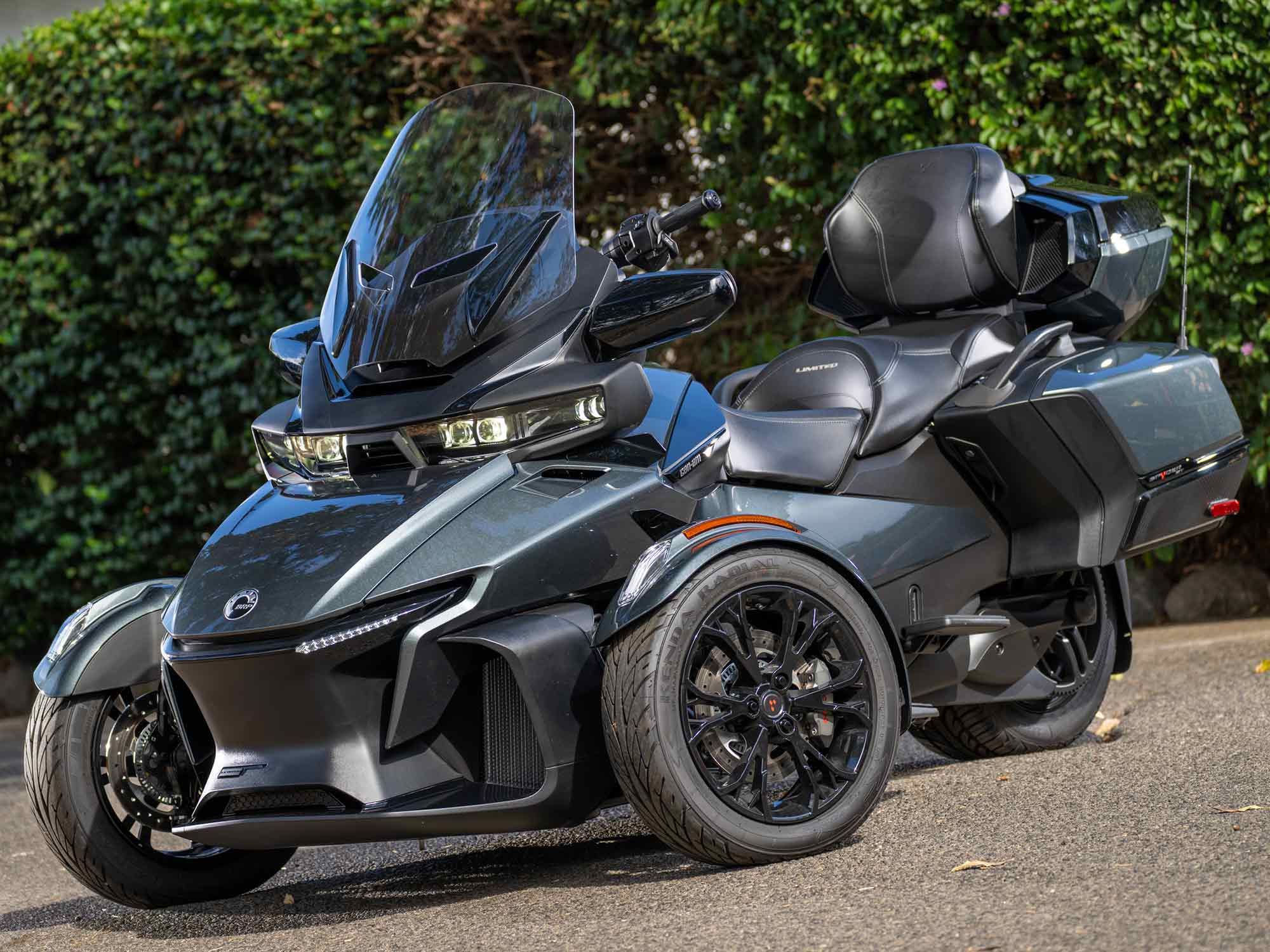 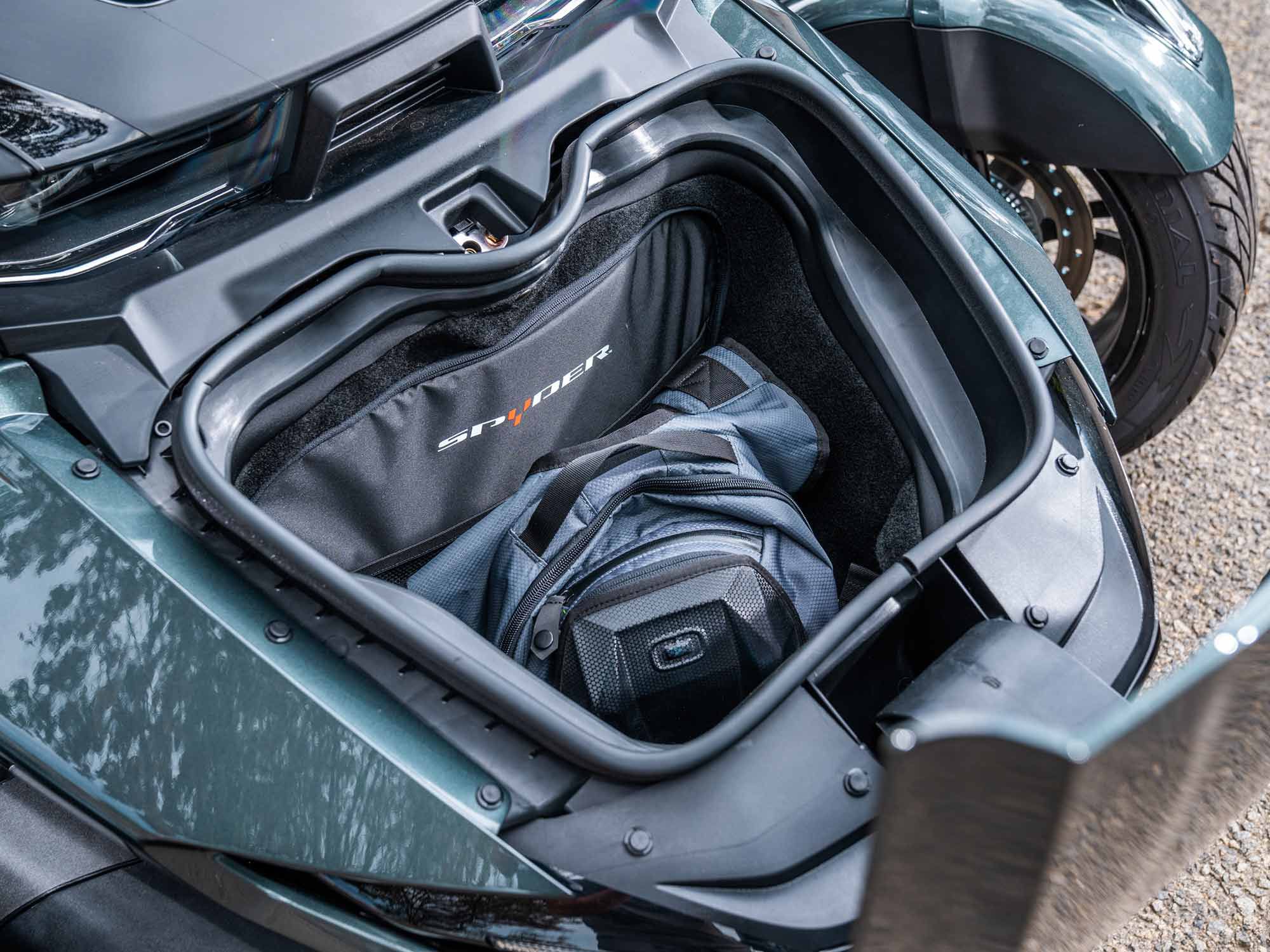 The Can-Am Spyder RT Limited is a more than capable touring rig for extended straight-line rides inside of the posted speed limit. (Joseph Agustin/)
Sign In or Register to comment.