Floyd
May 8 edited May 8 in Cars Motorcycles

Custom motorcycles stretched as far as the eye could see at the 2022 One Moto Show. (Bryan Harley/)

The 2022 One Moto Show stormed into Portland, Oregon, last weekend with its annual celebration of everything good about motorcycle culture. Custom motorcycles stretched as far as the eye could see within the cavernous Zidell Barge Building as motorcycle enthusiasts funneled into the belly of the beast. Spread about the steel girdered ribs of the old warehouse lie 300 custom motorcycles surrounded by a cornucopia of motorcycle-themed artwork. The smell of strong Stumptown coffee greeted revelers as soon as they walked in while music funneled in from the stage at the back of the building. Smiles went for miles as people ran into old friends or in the spirit of the One Show, made new ones.

“We blew the top off Year 13 and already can’t wait to do it all again real soon. Year 13 was a lucky one indeed,” said Thor Drake, owner of See See Motorcycles and creator of the show.

Who would have thought the first intimate gathering in an old abandoned foundry in 2009 would have evolved into the event it is now.

“Our first One Show in 2009 was pretty organic, as we didn’t anticipate it becoming an annual event. But, year after year, people throughout Portland and across the motorcycle industry took notice and pushed us to continue to evolve,” Drake said in a prior interview.

Making it to 13 has been no easy feat. Year 5 Portland got nailed by the “Snowpocalypse” and many couldn’t make it. I know this all too well because my wife and I got stuck in the snowstorm for three hours on I-5 outside Salem and had to turn around and come home. Year 11 was epic. Thor was able to convince the city to let him hold the One at Veterans Memorial Coliseum and for the first time racing and the show were held under one roof. It was also one of the last major motorcycle events held before COVID hit. Thor, Tori George-Drake, and the team pulled off a show last year even though there were still many mandates in place. Whether they would even be able to hold a show was up in the air until the last minute, but they put the proper measures in place and pulled it off.

Thirteen years later, the One Moto Show is going stronger than ever. Saturday the show sold out. This year they added cars to the mix, Stingrays with their Corvette Summer vibe and ‘Caminos with motorcycles in their beds a natural fit for the eclectic show. Friday night Erotic City channeled the soul of the Prince of purple as the tribute band ran through a Purple Rain set list while the crowd danced along. The cacophony of the Seattle Cossacks firing up their Harley-Davidsons broke the sleepiness of Saturday morning. The motorcycle drill and stunt team wowed the crowd with their acrobat performance, their mastery of their machines unmatched.

Unless your name happens to be Aaron Colton, Rob Carpenter, or Sean Sets. The trio of stunt riders rotated in after the Cossacks to keep fans on their feet with unbelievable feats on two wheels. Wheelies, stoppies, and burnouts ensued, Carpenter on a V-twin-powered Harley Pan America and Sets on his sportbikes waging a friendly battle.

This year’s performances were extra special for Sets as “5-year-old fun-haver” Jade Sets made her public stunt riding debut. Sets’ daughter Jade fired up the crowd doing laps on her pint-size motorcycle. That was just the tip of the iceberg as the 5-year-old with ice in her veins climbed onto the cradle of the tank of her dad’s stuntbike as he lofted the front wheel high. She followed that up by climbing up on the front wheel for her next stunt, holding on tight as Sets sent spools of spent rubber behind them. Little stunter Jade is already attracting attention, including that of fellow female stunt rider Smash Stunts.

“We did our first shows together at @the1moto show, nothing short of amazing. Jade worked the crowd. Did a lap giving every person a high 5 to start the show then the second show did laps busting her little tricks on her dirtbike taking her hands and feet off. We did a few tricks together and was so fun. Thank you to @iconmotosports and to everyone involved or attending the event. Everyone went crazy for her I couldn’t be happier or more proud. Extremely special moment,” Sets posted to Instagram.

Fellow stunt rider Colton would have to take a break from breaking traction on asphalt outside in the yards long enough to accept the Champion of Champion award at this year’s show. Colton did double time at the 2022 One Moto as a stunt rider and builder in the show, and was undoubtedly deserving. Colton’s stunning 2020 Alta Redshift electric supermoto sat prominently just inside the front entrance to the Zidell Barge Building.

“I definitely didn’t expect this to be honest. I put everything I could into that motorcycle and I try to with all of them. It’s been an incredible learning process the last couple of years with the series I started with Red Bull trying to get more and more people interested in doing their own work, and honestly a lot of the stuff I’m preaching and teaching I learned only days before, so it’s been an ever-evolving process at that point,” Colton said at the award ceremony.

Colton’s attempt to encourage more people to wrench on their own bikes ties perfectly into a motorcycle show which applauds hand craftsmanship and ingenuity. Team this widespread love for everything two-wheeled along with the characters who live and breathe the culture and you’ve got a winning combination that’s 13 years strong.

Indian Motorcycle rep Taylor Young nailed what makes the One stand out when presenting the Champion of Champion award:

“It’s really the people that make this one special.” 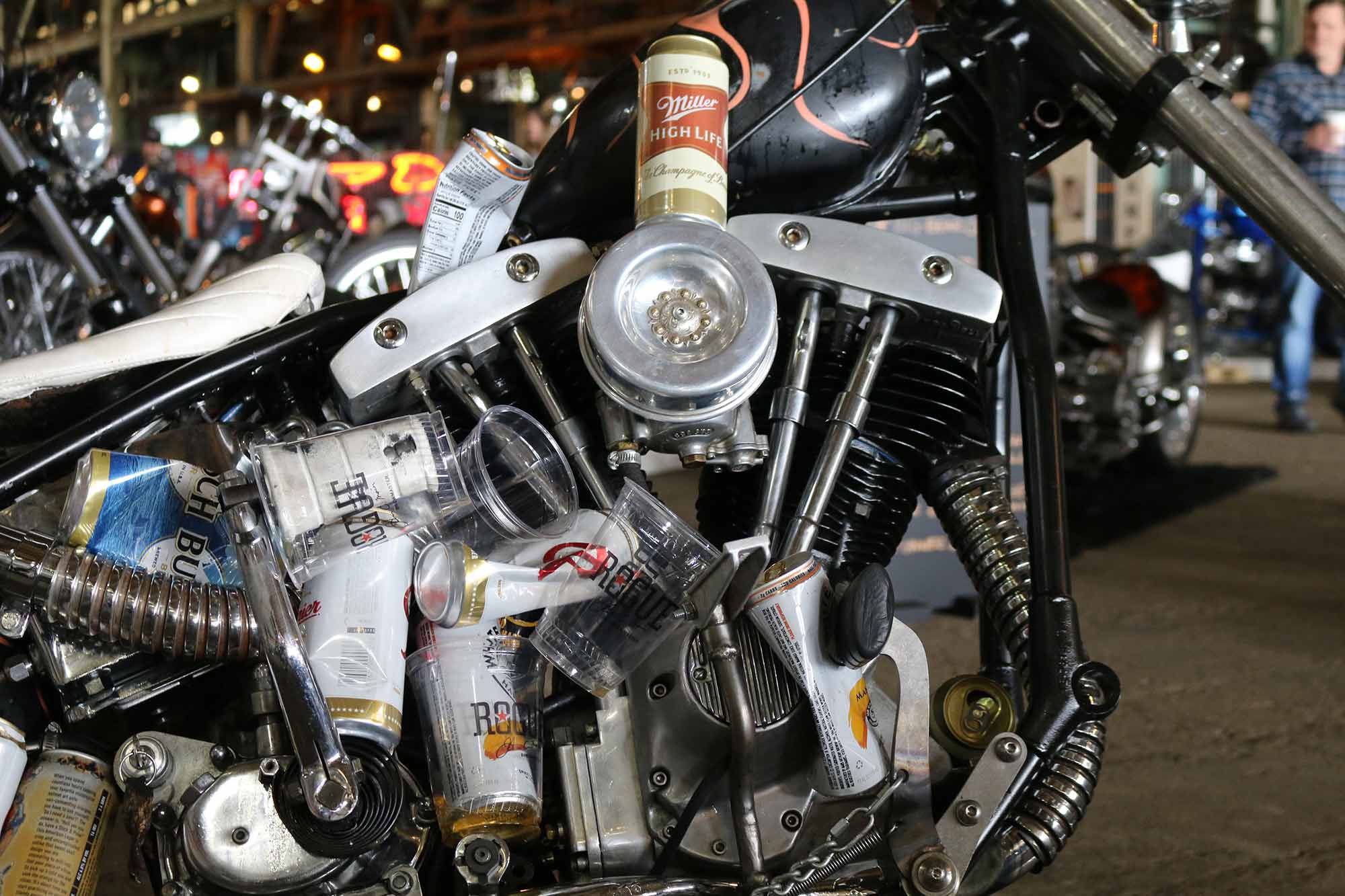 This chopper was livin’ the “High Life” at the One Motorcycle Show. (Bryan Harley/) 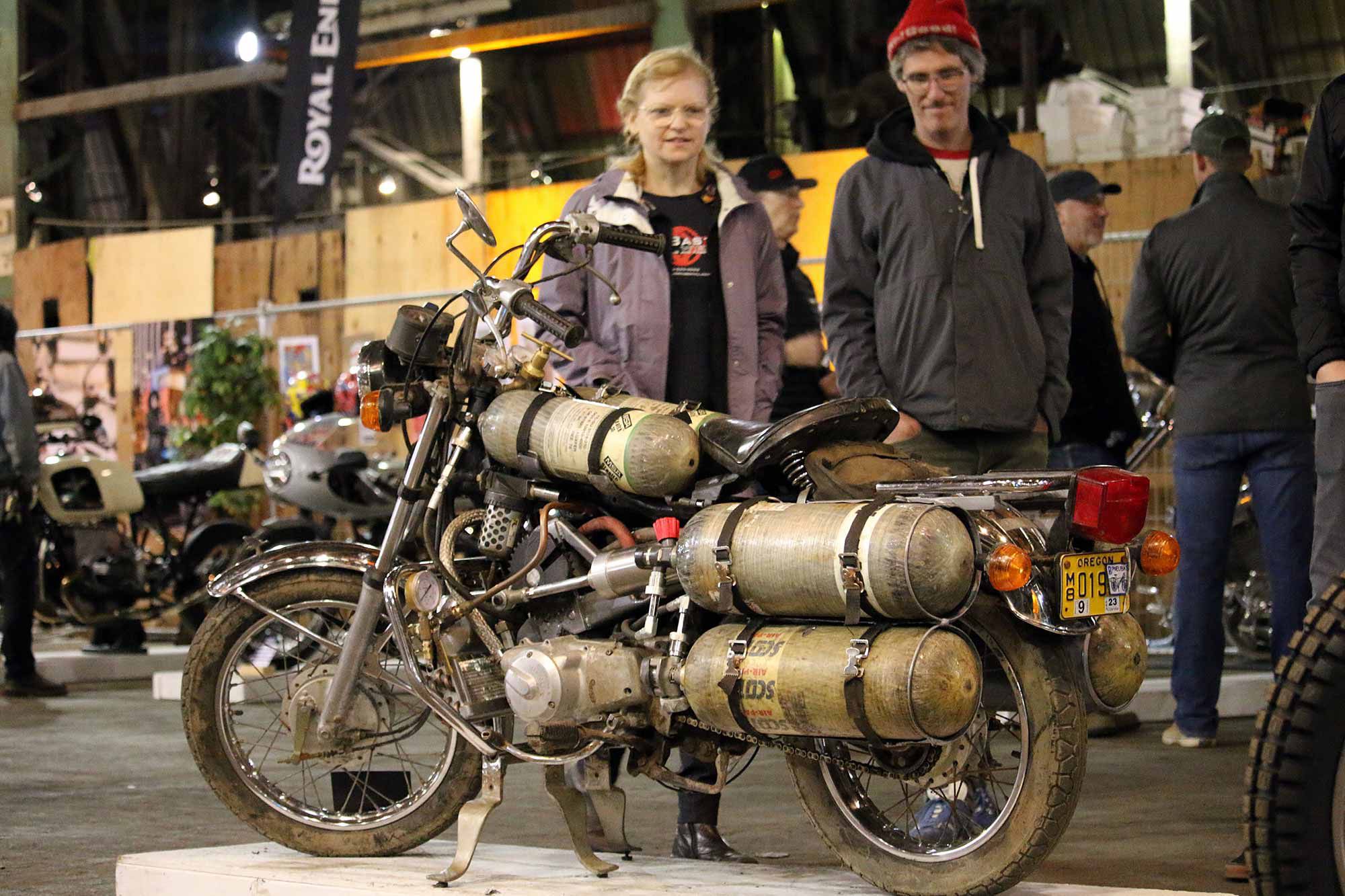 Ever seen a motorcycle that runs on compressed air? You would have if you were in Portland at the One Show last weekend. (Bryan Harley/) 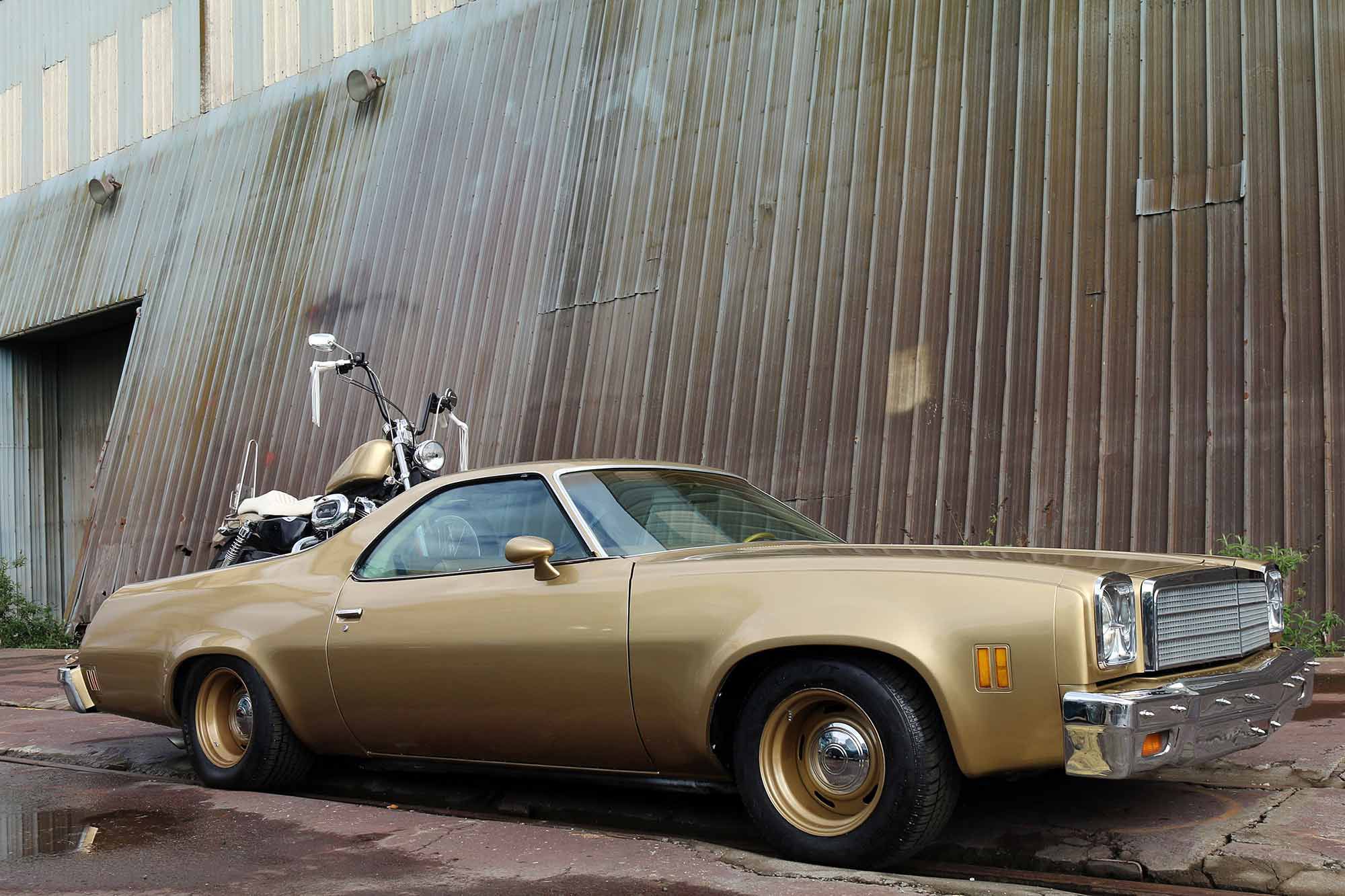 For the very first time cars were part of the One Moto Show. Hard to argue against this golden combo. (Bryan Harley/) 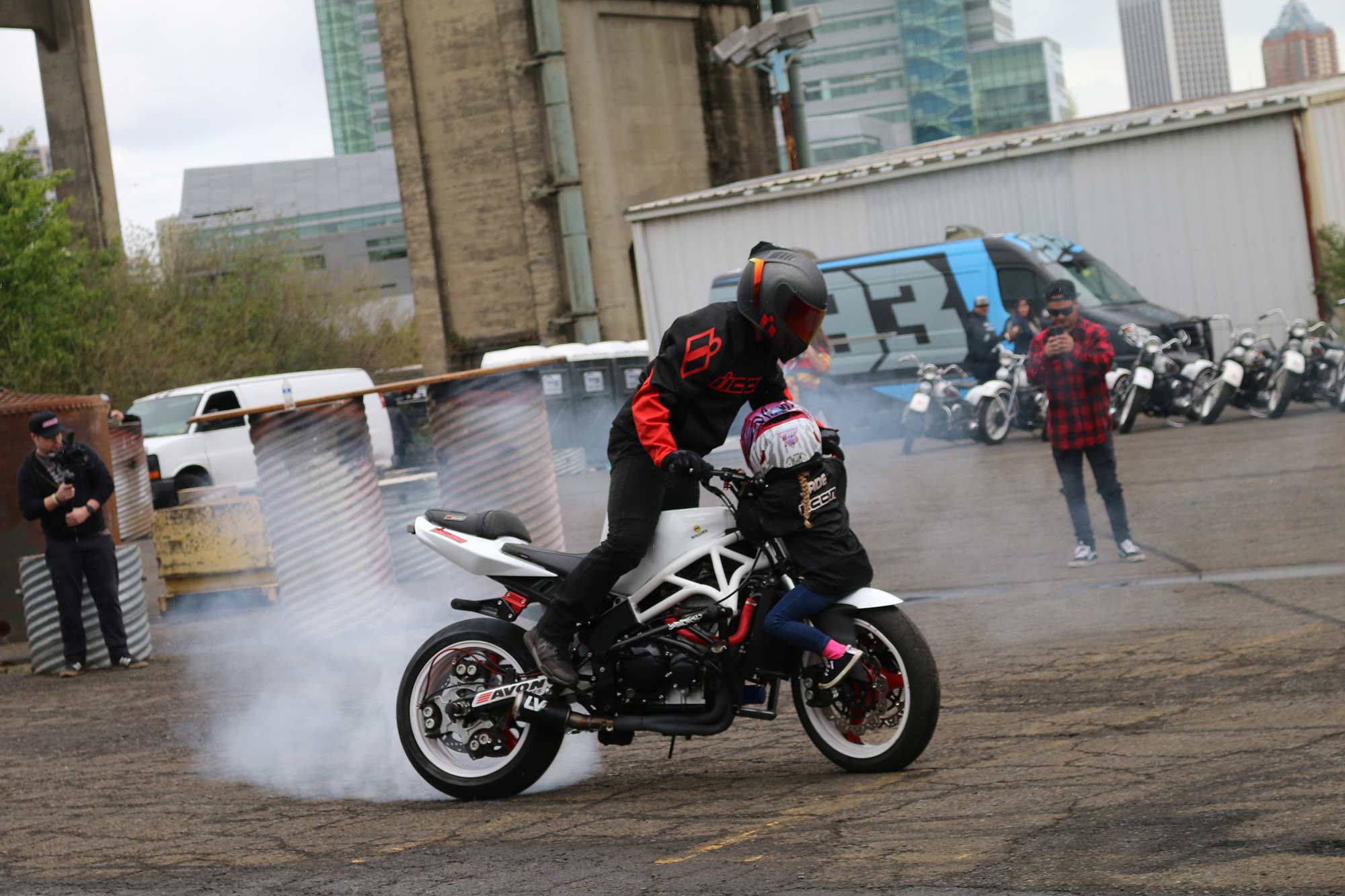 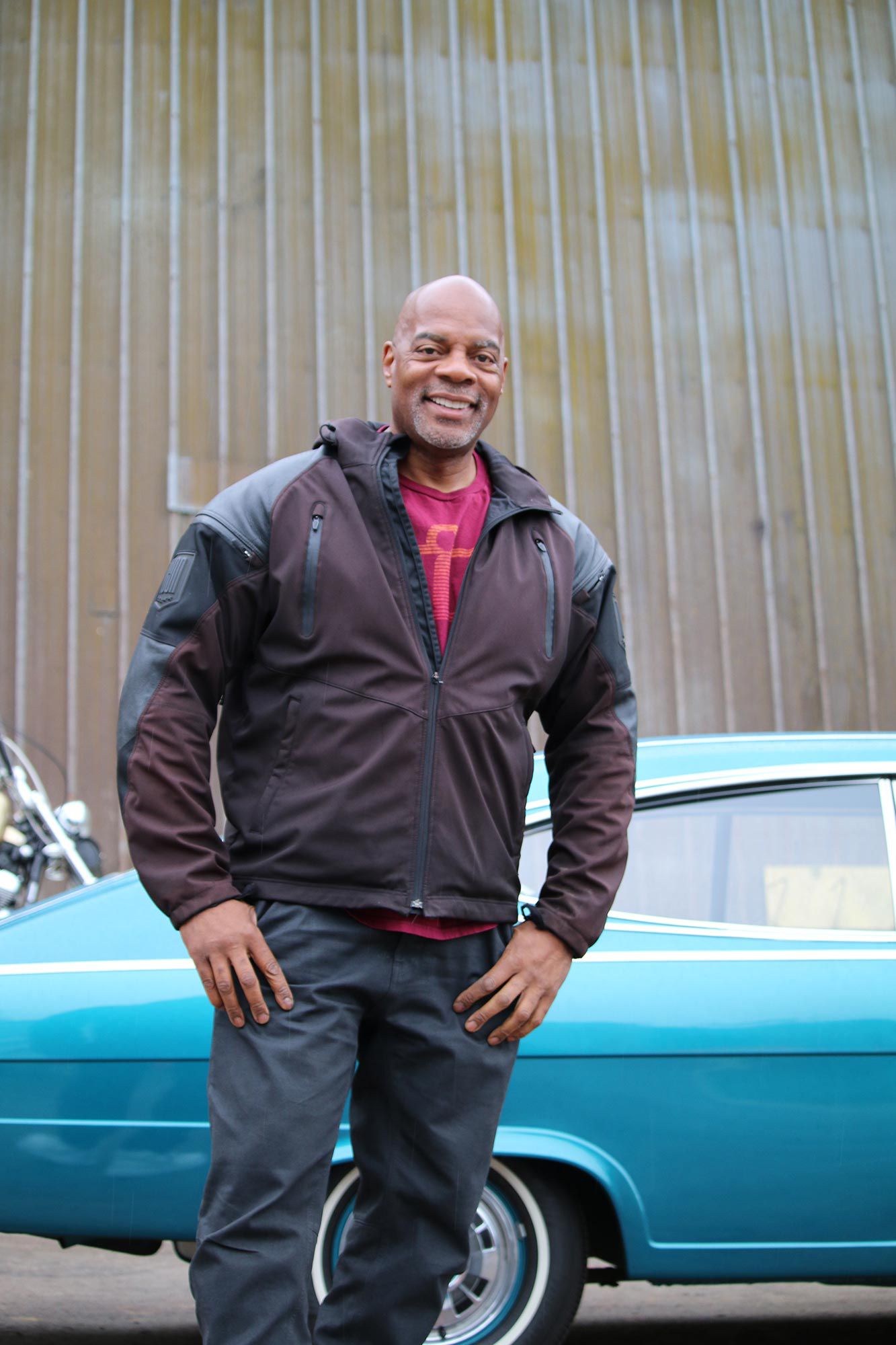 Comedian Alonzo Bodden was all smiles while taking in the One Show experience. (Bryan Harley/) 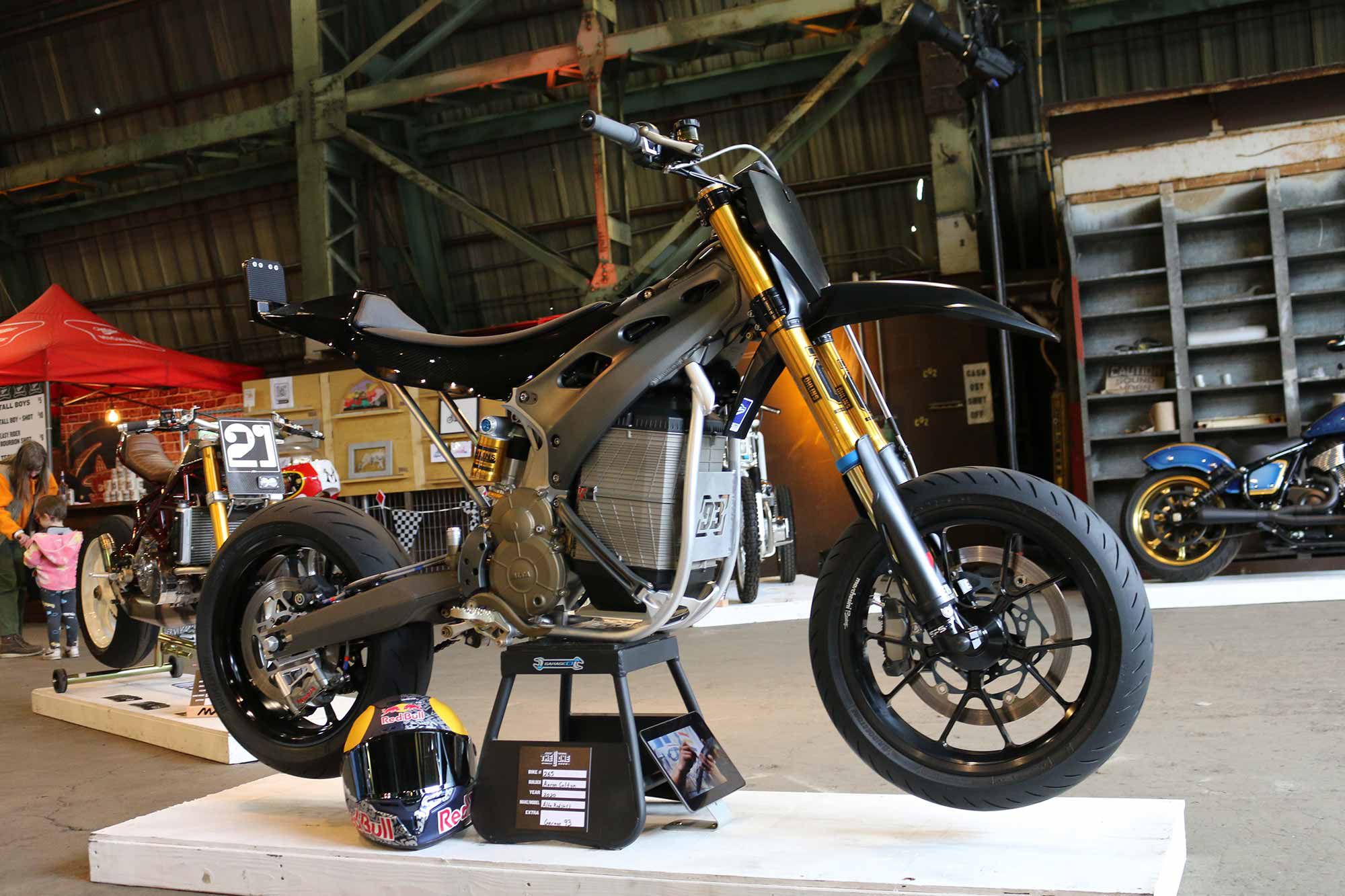 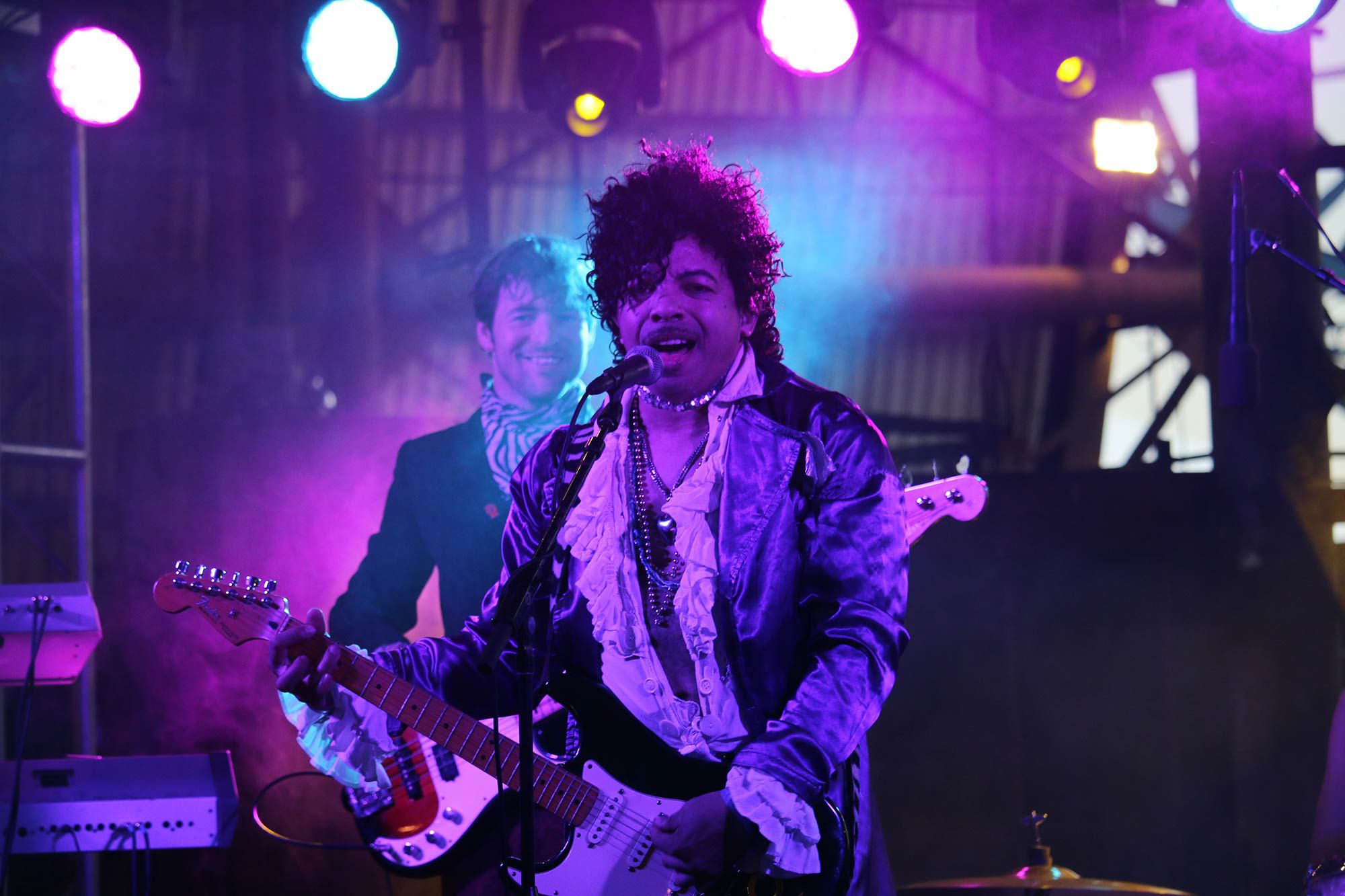 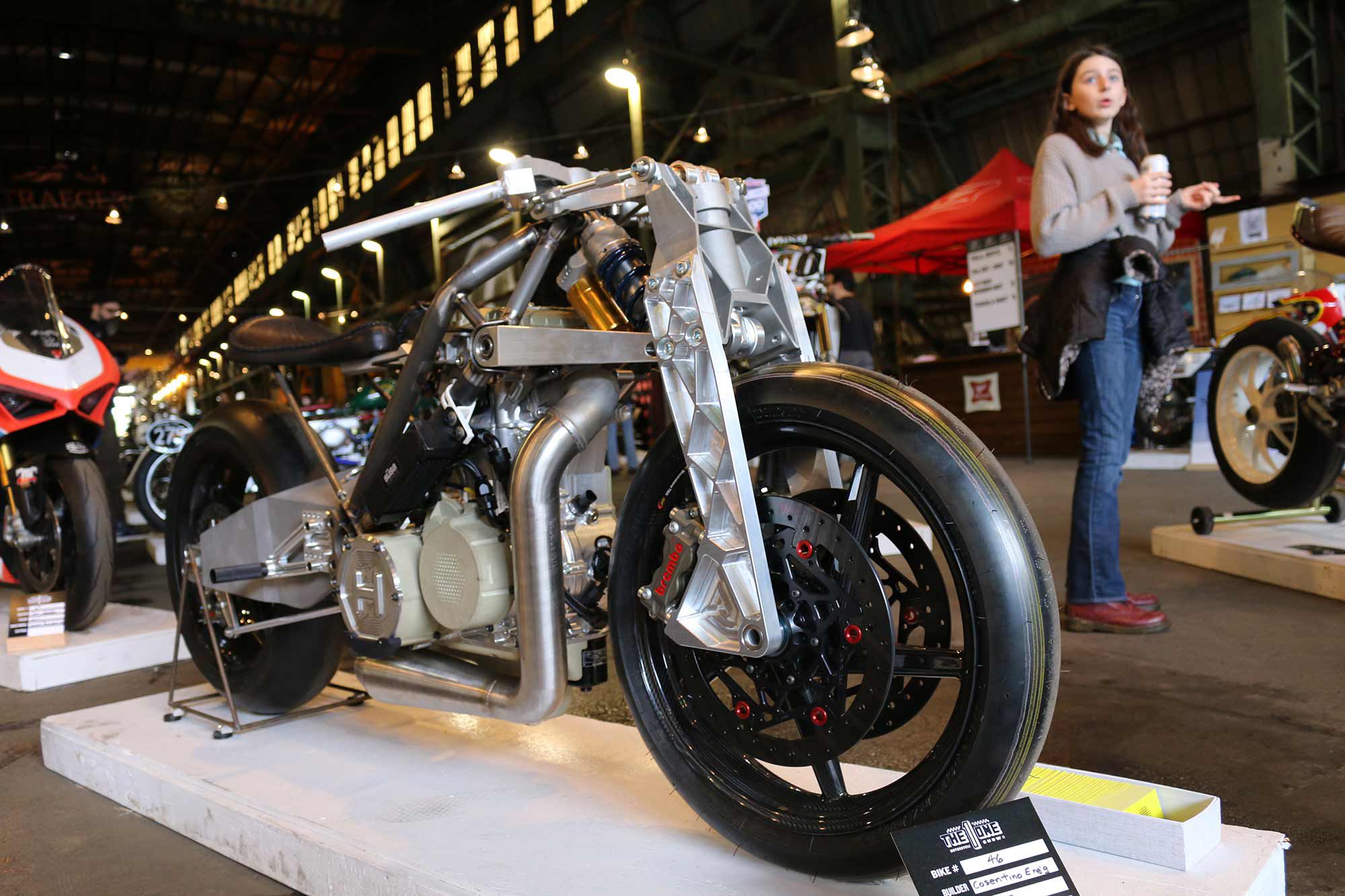 Cosentino Engineering’s Hypermono is a rad 600cc race-bred single with heads and pistons from a Ducati Panigale 1199 and a counterrotating crankshaft and cases designed by Cosentino. (Bryan Harley/) 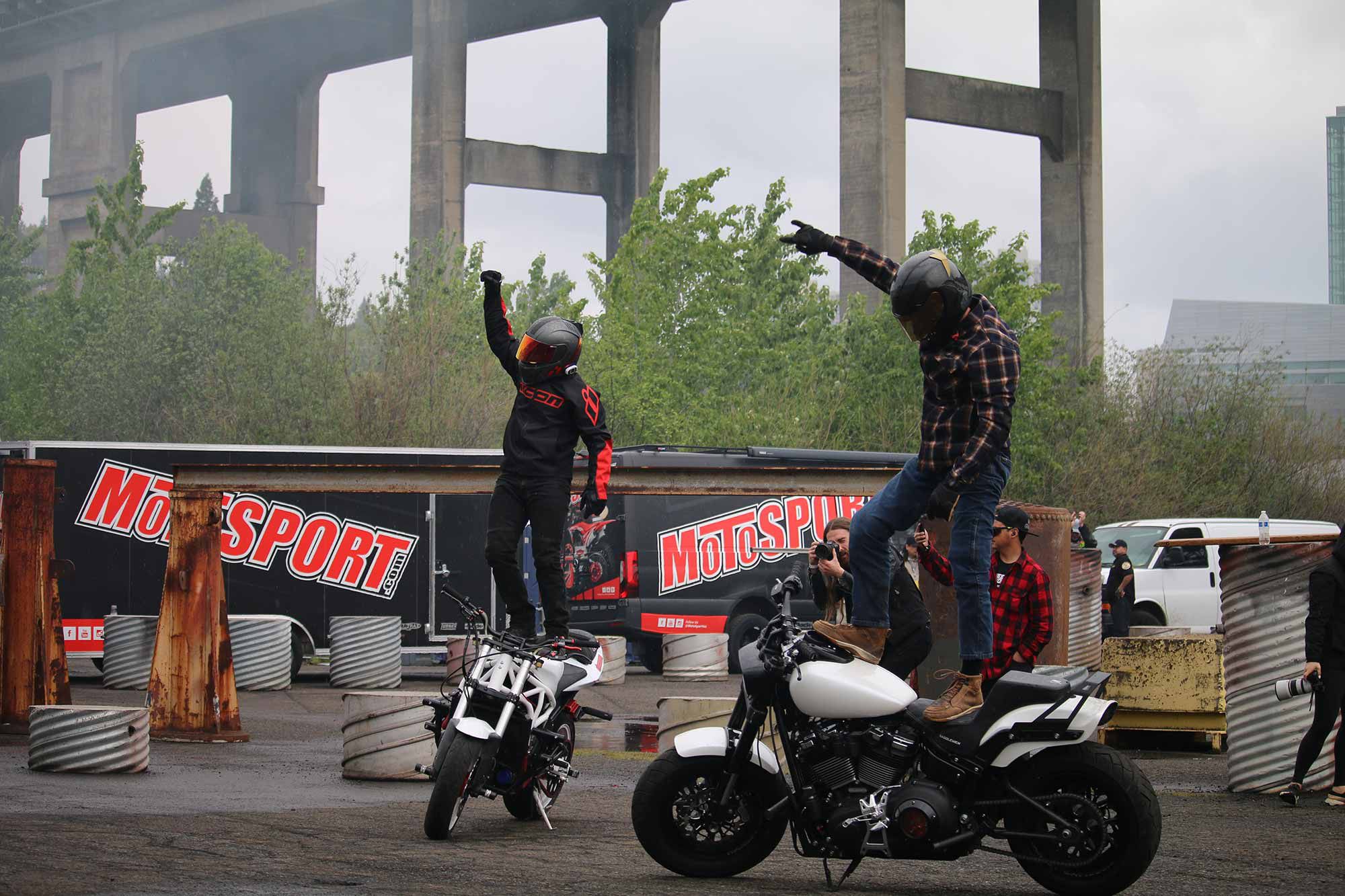 Stunt riders Sean Sets and Rob Carpenter celebrate after another tire-shredding performance. (Bryan Harley/)
Sign In or Register to comment.