Floyd
May 11 edited May 11 in United States Presidential Elections

Because come hell or high water, Democrats are going to find a way to interject abortion into every conversation leading up to the elections.

Yellen was a more than willing participant, explaining her view that legalized abortion access allowed women to earn incomes, further their careers, and increase the labor participation rate.

“I believe that eliminating the right of women to make decisions about when and whether to have children would have very damaging effects on the economy, and would set women back decades,” Secretary Yellen said.

Again, that’s the head of the Treasury Department offering her opinion on abortion.

Yellen added that research “makes clear that denying women access to abortion increases their odds of living in poverty or need for public assistance.”

U.S. Treasury Sec. Janet Yellen testified to the Senate Banking Committee on Tuesday that research has shown denying women access to abortions increases their odds of living in poverty or on public assistance – an impact that will have “very damaging effects on the economy.” pic.twitter.com/V1jGjjtuhK

While I’m glad Yellen and the Biden administration are suddenly concerned about the economy they’ve been destroying for the past year-and-a-half, and the labor participation rate that fell off a cliff during the Obama-Biden administration, it’s macabre to hear her break down the lives of children into simple economic measures.

Tim Scott said he found Janet Yellen’s comments “troubling” and challenged her on the matter.

“Just for clarity’s sake, did you say that ending the life of a child is good for the labor force participation rate?” he asked.

“I think people can disagree on the issue of being pro-life or pro-abortion, but in the end, I think framing it in the context of labor force participation, it just feels callous to me,” added Scott.

Yellen proceeded to whitesplain to Scott that many cases of abortion involve teenage girls, “particularly low-income and often black” who don’t have the financial means to continue their education and go on to further their careers.

“I’ll just simply say that as a guy raised by a black woman in abject poverty, I am thankful to be here as a United States Senator,” Scott fired back.

And here’s Yellen explaining to @SenatorTimScott, the black son of a single mother who grew up in poverty, that it’s especially important for black women to have abortion access because they are often poor.

Scott responds powerfully: “I am thankful to be here as a U.S. Senator” pic.twitter.com/Ab3Miw7gfW

In closing remarks, Senator Tim Scott continued to address some of the things he had heard from Janet Yellen and others at the hearing in regards to abortion regarding young black women.

“Telling Black teenage moms that there’s only one alternative for them is a depressing and challenging message,” he countered.

Nothing better than a multi-millionaire old white woman lecturing a black man about how his mother was a loser because she let him be born. https://t.co/meZZJzGBFN

“So sitting through and listening to so many folks stereotype the necessity of making a life-altering decision as if it’s the option to me is not right,” Scott continued adding that even in difficult financial times “there is still hope.”

“I think about the reasons why we should be hopeful and send a message of optimism and opportunity to single moms around this country challenged with too much month at the end of the money,” he said.

That is a particularly common scenario in the age of Biden where real wages are being decimated amongst record gas prices and historic inflation rates.

Senator Tim Scott released a video last year honoring his mother during Women’s History Month and celebrating her sacrifice to provide him with a fulfilling and rewarding life. 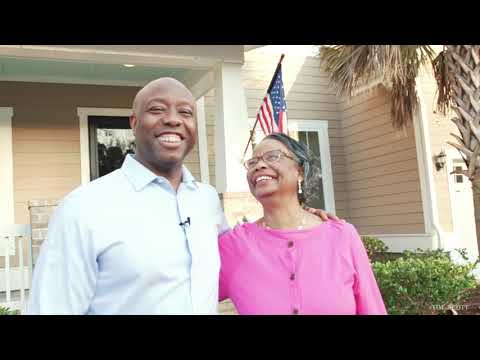 “I think to myself had it not been for her sacrifice, her perseverance, her resilience, I would not be where I am today,” he said of his mother.