What’s Selling a Motorcycle on Bring a Trailer Like? 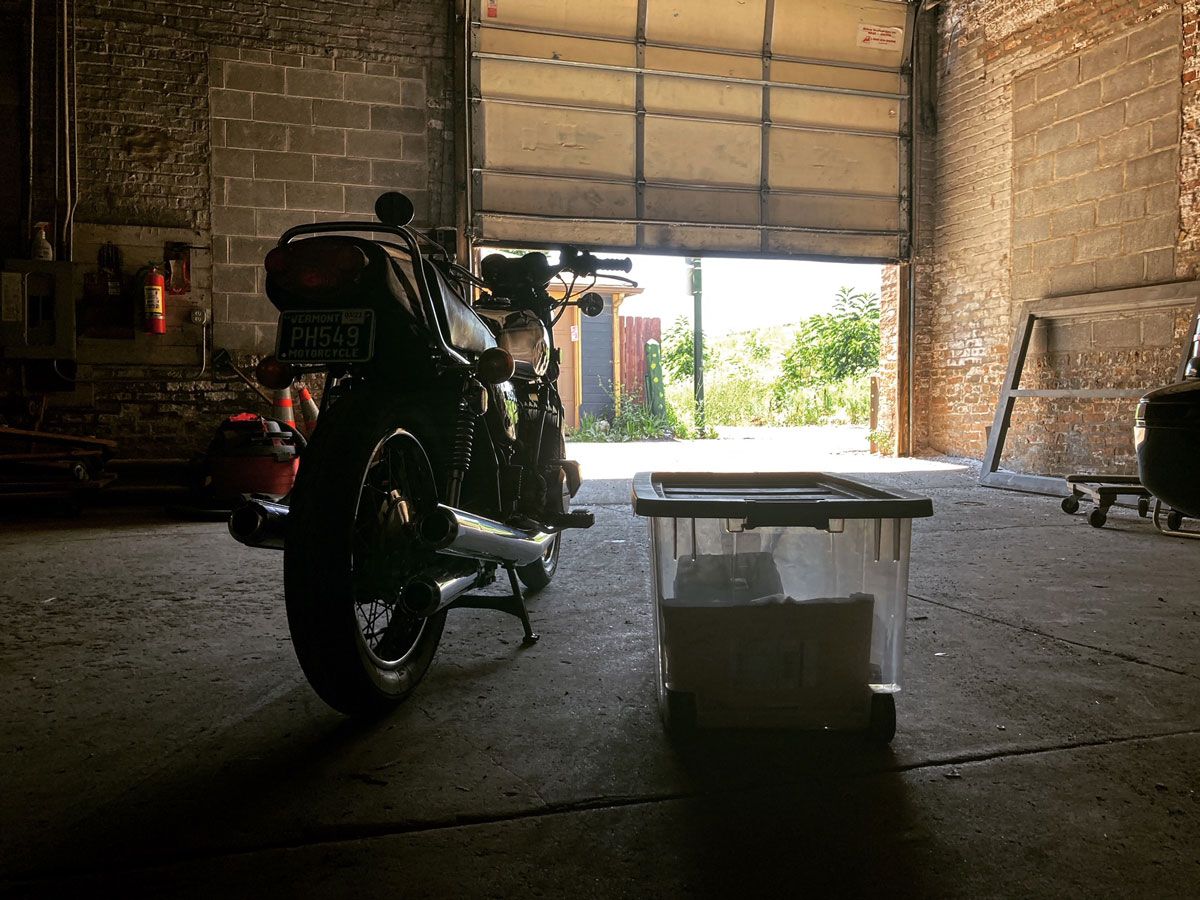 Chances are you’ve spent time on Bring a Trailer. For most of us, it’s not about actually buying or selling a used motorcycle or car. It’s about watching other people go through said process with noteworthy vehicles. Then commenting on it.

Born as a blog in 2007, BaT exists because fellow car/motorcycle nerds like you exist. BaT’s vetting and curation process is key. It ensures a steady stream of surprising, engaging rarities for sale, even when the hoi polloi doesn’t approve. Jalopnik regularly features a “Biggest Sucker on Bring a Trailer” column, which is recommended reading. Bring a Trailer has been owned by Hearst Auto Group since 2020 and benefits from Hearst assets, notably Car and Driver and Road & Track magazine, which no doubt amplify their audience. It’s part of a “synergistic” strategy of connected interests scratching each other’s backs while growing and supporting a community.

The BaT folks have made compelling spectator sport for those in capitalism’s lower (and higher up) rungs. Do you attend Mecum auctions? Probably not. But BaT connects the haves and the have-nots of the automotive and motorcycling world in one long scroll. They ensure an unbiased, uniform experience for buyer and seller that results in fair outcomes and great reading.

I’m selling a 1975 Kawasaki H1F I bought nine years ago. I didn’t restore it, but I got it running, raced it once, and generally enjoyed owning it. But it’s time for it to go. The bike nearly killed its previous owner, so I replaced the frame and swingarm, plus the speedo/tach housing. In mid-2014, I found exactly one compatible H1 frame for sale, a 1973 (H1D) example. With the ‘73 frame, it’s a Vermont-registered (not titled) Kawasaki H1D in the legal sense. It’s a complete ‘75 H1F, as far as engine, colors, and bodywork are concerned. If the right buyer’s cool with this, they’ll have a fun summer terrorizing the EPA and common sense. Prices on H1s are high, with pristine later examples fetching $10K or more. My H1 isn’t anywhere close to that. But what is it worth? Time to find out.

From start to finish, it takes about 45 days to go from acceptance letter to finished auction. Just getting accepted felt like a feat. Not just any vehicle goes up on the BaT auction block. My bike was accepted on June 1; by July 8 it was live. As per the BaT process, the listing is written entirely by an auction consultant, a nice guy named Chris. I was unsuccessful in reaching Chris for comment about being a BaT consultant, but he seemed genuine about wanting me to have a good BaT experience.

I included pics of an article I wrote about my half-assed efforts to get it running and race it, figuring it might give the bike “provenance.” Bad idea. Instead of just listing its faults, I’d literally written a whole story about them. As is his job, Chris grilled me on various anomalies from my description and the pictures, like the bent subframe and crash damage. Motojournalism isn’t the unfair advantage many assume it must be, and doesn’t necessarily add value to a vehicle.

Chris wove my story into a legally unassailable tale of shortcomings, disclosures, and brutal honesty that would hold up in any court of law. By the third sentence, the crash history and 31 years of storage were disclosed. The lack of title arrived in the second paragraph, along with more descriptions of damage. But it was all correct, true, and accurate, as affirmed by the idiot owner of this “widowmaker.”

Once BaT had earned its $99 auction fee, it was time to be judged.

Bring a Trailer doesn’t like auctions to go live if the seller isn’t close at hand to what they’re selling. But now I’m back, it’s up, and I’m damn excited. Thousands of fellow losers can see what I spent the last few months finalizing. Immediately, comments trickle in. Rather than reading the listing, folks ask redundant questions and offer expert opinions. Bring a Trailer fans note that the comments are a sort of “policing” of the community and auction integrity. I can see that. Looks like they’re handing out deputy badges at the Anybody Corral. You can flag comments as “not constructive,” but I decide to see how the conversation plays out, good or bad.

If there was a “Nuke the Commentator” button, I’d bloody my fingers pressing it. Evidently, my H1 is a disappointment to motorcycling. There’s the bike people want to see; then there’s the bike actually being sold. Comments roll in bemoaning how the latter is not the former. Folks point out the obvious: “If you stick a 1975 motor in a 1973, it would still be a 1973.” That’s correct. But I didn’t stick a ‘75 motor in a ‘73 frame. I stuck a ‘73 frame inside a ‘75 bike. I bring up Donald Rumsfeld’s quote about going to war with the army you have, not the army you wish you had. I wish I was selling an uncrashed H1 with a title, but this bumblebee-poop survivor is what I got. Let’s remember who the real victim is here.

You’re supposed to be helpful and good-natured in responding. But the commenters have the right idea. I offer to “help [folks] practice reading” with “fun facts,” and to “Google that for you.” This ends most of the negative comments. I’ve either defeated them with shame or, more likely, bored them enough to go elsewhere.

But now I miss them. I’m alone with my thoughts and have no one to argue with. What was I thinking?

Someone asks whether ‘74-75 models handle better than ‘73 ones. I reassure him that all H1s suck at handling. The BaT copy isn’t helping either. But it’s not meant to put sizzle on steak. The listing is carefully crafted to give all auctions the same impartial auctioneer’s voice, dryly noting “equipment” like a two-up seat and front disc brake. For legal reasons, they note that “total mileage is unknown.” True, but it makes the week I spent learning how to restore the speedometer seem pointless. The low original mileage is the only worthwhile thing about the bike. Maybe I’ll post an unhelpful comment about that later.

To stir the pot, I post pics of meaningless upgrades. I source a period-correct Kawasaki master cylinder cap and install a speedo cable stay. But the BaT community is unmoved by my meticulous work. Someone wants to see the bike in person. No problem, I reply. I never hear from them again. Pretty standard. Most comments are just pointless reminiscing about H1s from people who aren’t looking to buy one; also pretty standard. There’s one day, seven hours, and 43 minutes left.

Whatever. If it doesn’t sell, I’ll title it and raise the price by a grand. Seems fair for dealing with the Illinois DMV.

Resignation sets in. Bored, I check out the commenter profiles. How much time does it take to accumulate 7,532 likes on your comments? Longer than the commenter has spent actually bidding or posting stuff for auction, which is zero and zero, respectively. Being rich with likes must count for something on BaT.

Today the needle finally moves, a familiar final-day-of-auction pattern. Six hours before my auction ends, a $3,200 bid arrives. Three and half hours later, we’re at $3,400. Then, nothing. There’s two hours and 53 minutes left. Three bidders wait until the last four minutes to post bids of $3,500, $3,600, and finally, $4,000—same as the reserve. It’s the minimum amount necessary to sustain my fragile ego. I sort of got what I mostly wanted.

The buyer is from North Shore. He emails me immediately and we discuss delivery, which as the BaT name implies, involves the buyer figuring all that out. He’s eager to pick up the bike, and three days later arrives with a Sprinter.

He’s bought a number of significant early Honda CB750s, so my lowly H1 sticks out in his buying history. But he emails me pics of a 1974 Kawasaki H1E and a 1972 H2 Mach IV. They’re part of his 78-bike collection. Although dozens of income tax brackets separate us, I like the guy.

I ask him his thoughts on the process. What does he like about BaT?

“I like the almost instant responsiveness of the site and the two-minute reset at the end of the auction each time someone raises the bid,” he says. “And that cool sound when the bid is raised.”

He likes the “string of comments” and the videos. Plus, he likes seeing the buyers’ history and enjoys the transparency of the BaT process.

Is there anything he’d change with the BaT system?

“I’ve heard BaT has been discouraging sellers from listing bikes with a reserve. Also, not to be so stringent on what’s allowed to be written. BaT seems to want cookie-cutter descriptions and they don’t allow literary freedom by the seller.” I know, I know; I promise, that’s really what he said.

What’s he going to do with my lowly H1?

“I’ll have the paint redone, find original parts, and detail the bike, so it looks decent and I can ride it.”

Most of his collection are museum pieces. Now he’s got a daily rider to help fumigate his museum with Castrol smoke. I tell him I still have a thing for Kawasaki triples. I’d like an S2 or S3 someday. He responds with a picture and says, “I may as well show you my S2 that I restored and also can’t ride.”

It’s an immaculate ‘71 S2 350 on a pedestal. It’s wonderful. Looks like I’ll be signing up for Kawasaki BaT listing alerts. And until I find the right one, I’ll be commenting on ones that aren’t. Let’s do it again. 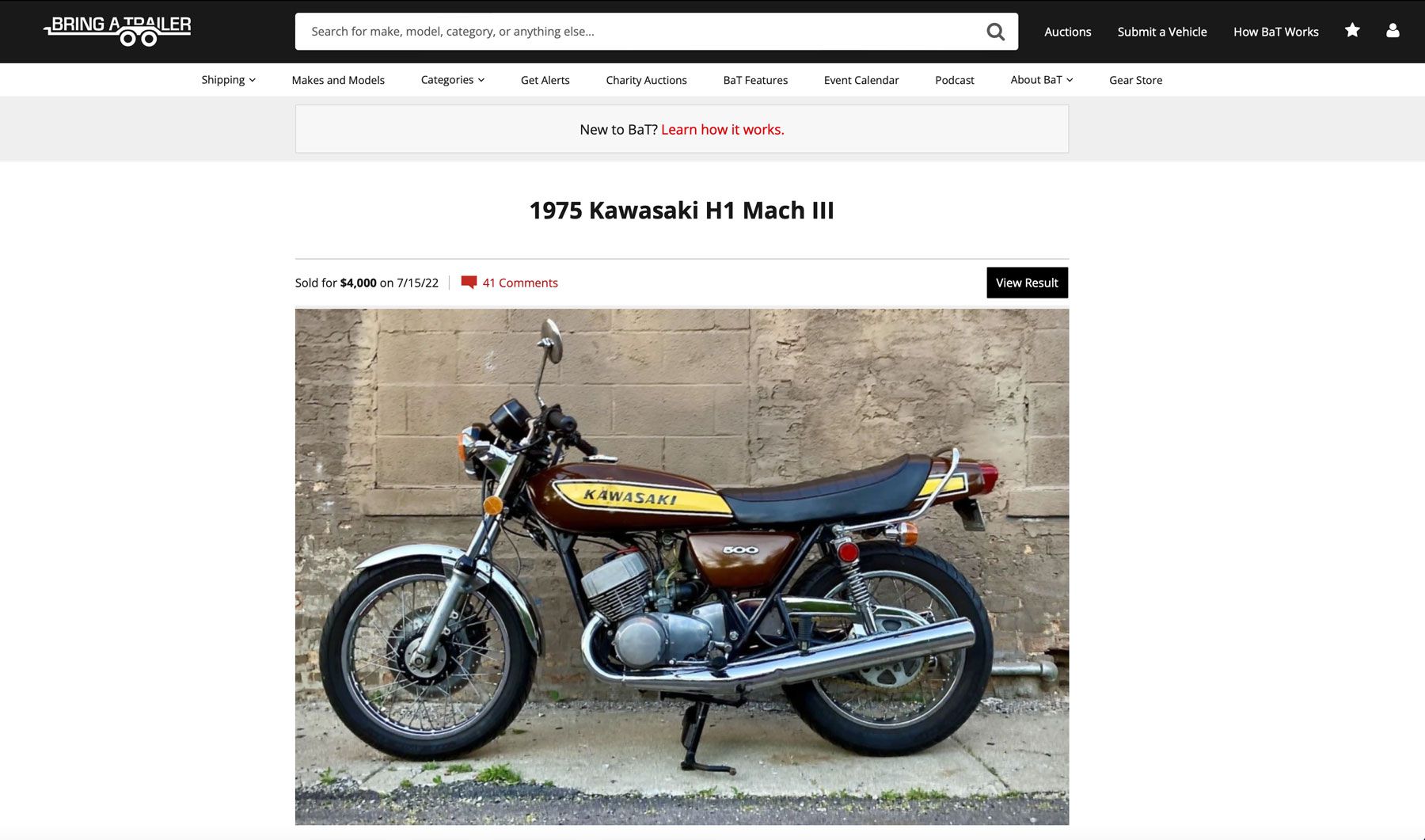 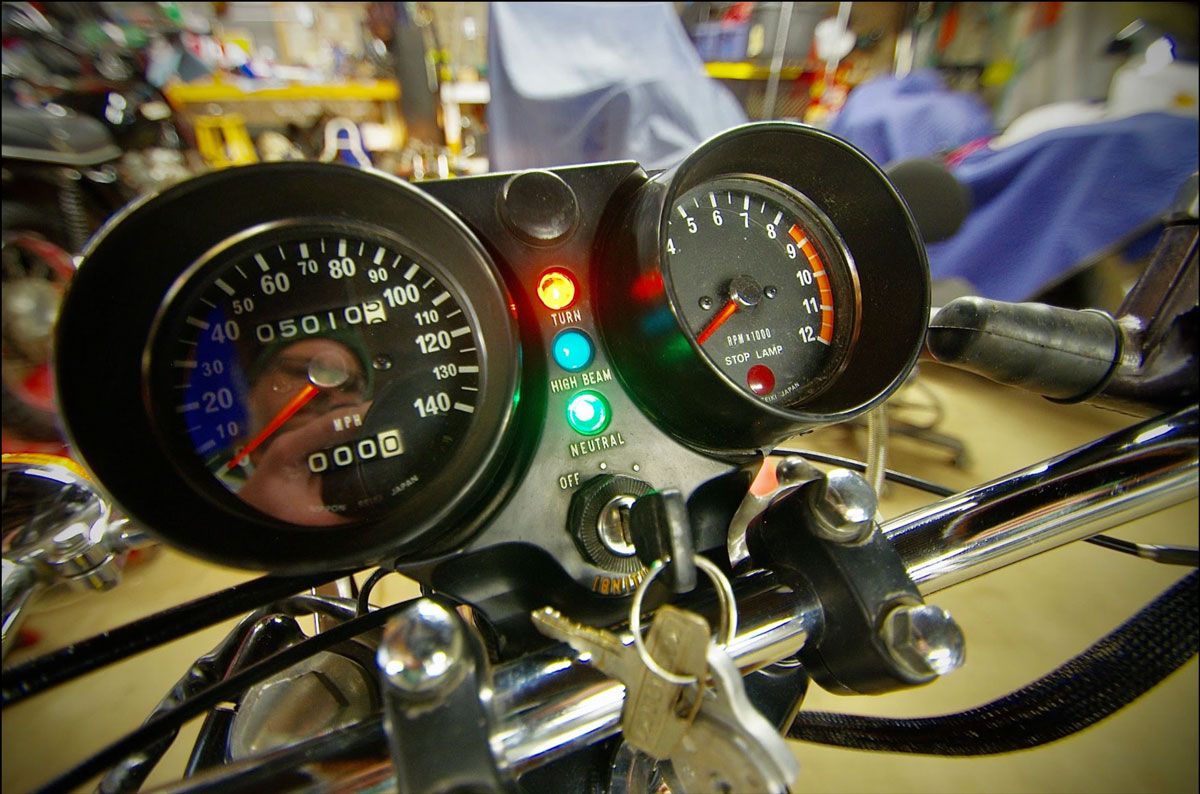 Low miles, plus all the blinky bits and lights work. (Anders T. Carlson/) 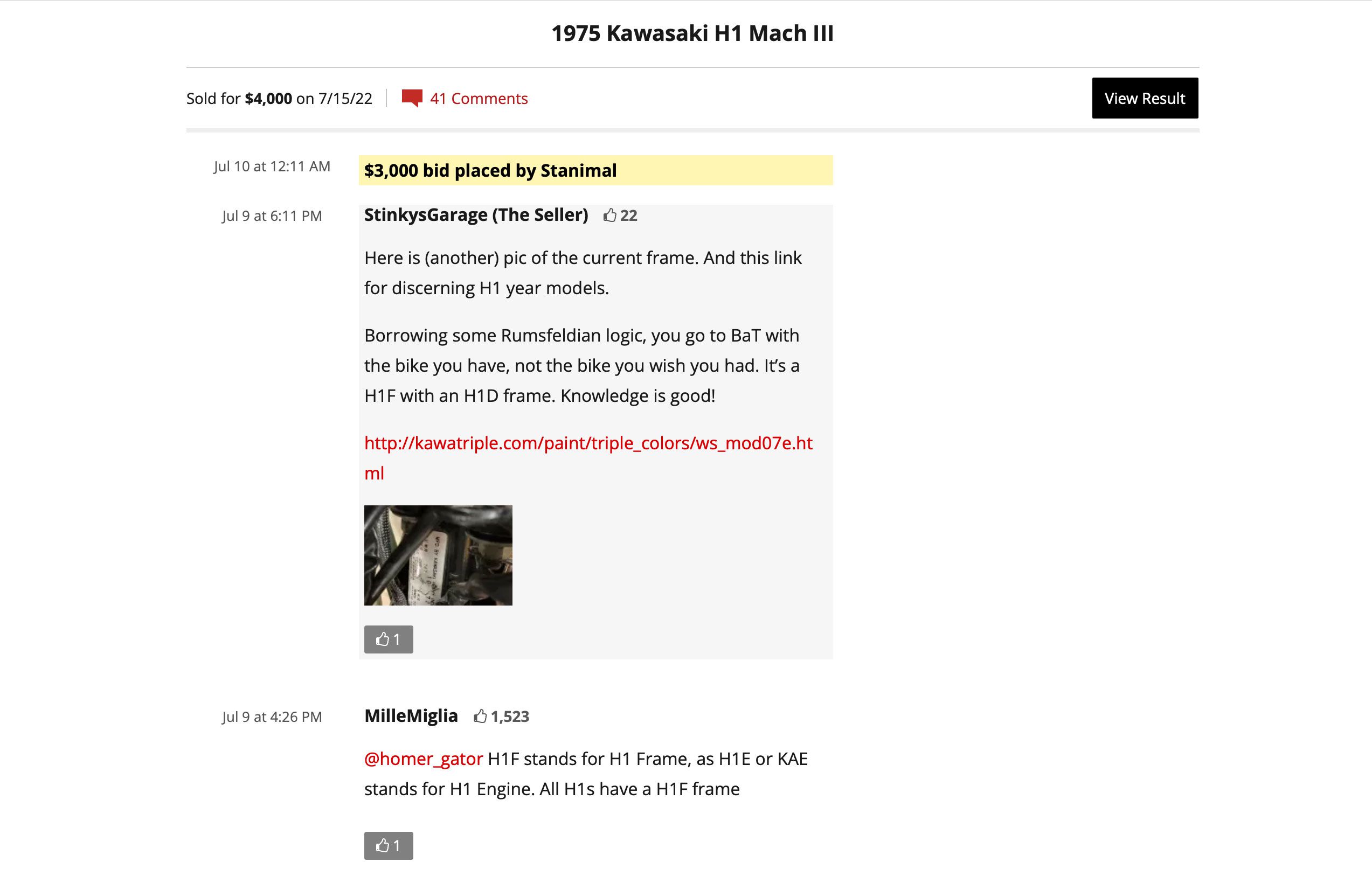 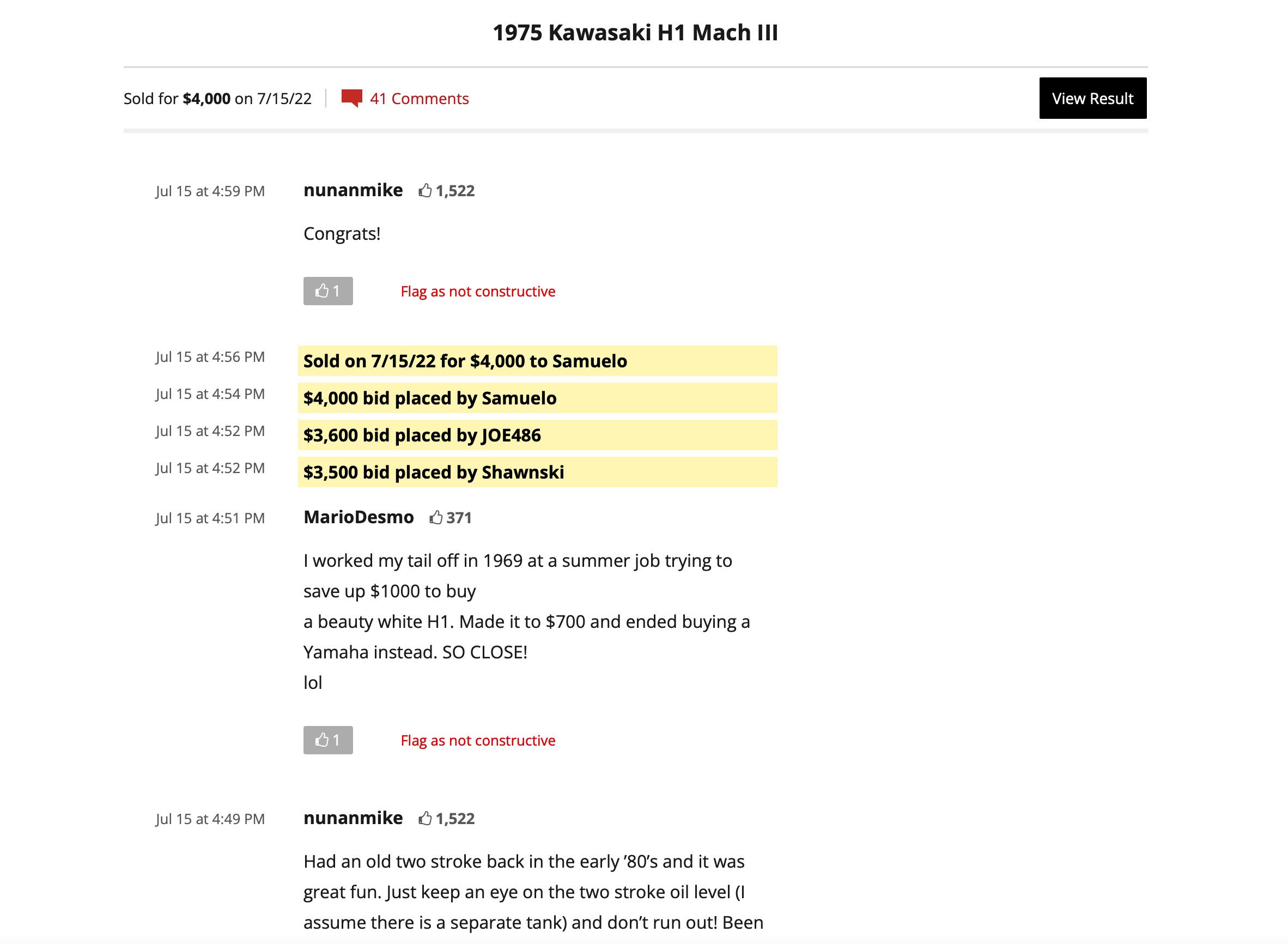 All the action happens at the end: what the end of a BaT auction looks like. (Anders T. Carlson/) 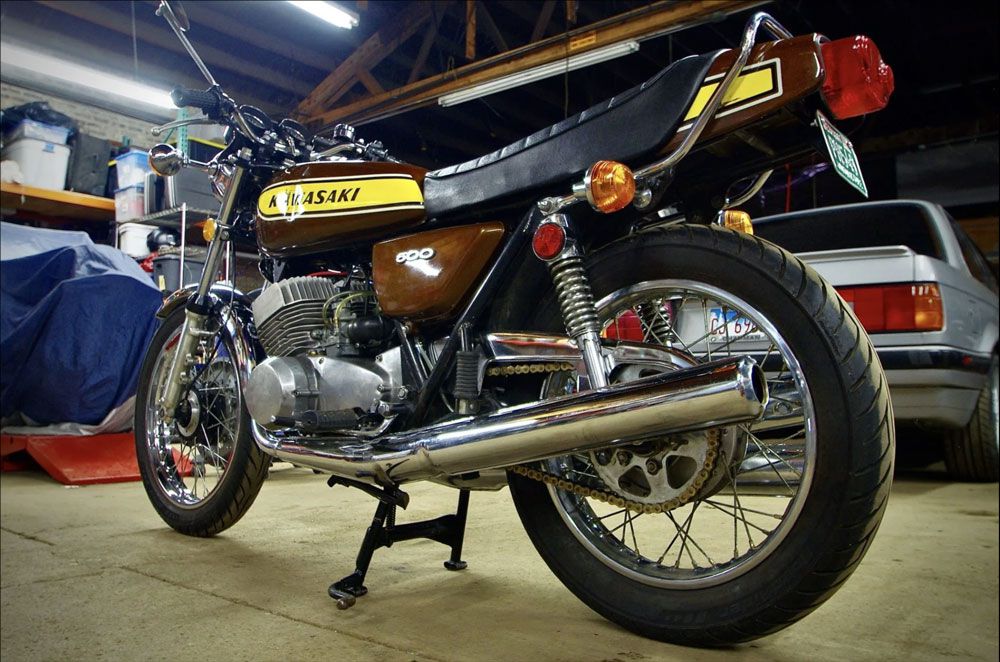 Nice shot, but I was asked to shoot the bike against a “more neutral” background. (Anders T. Carlson/) 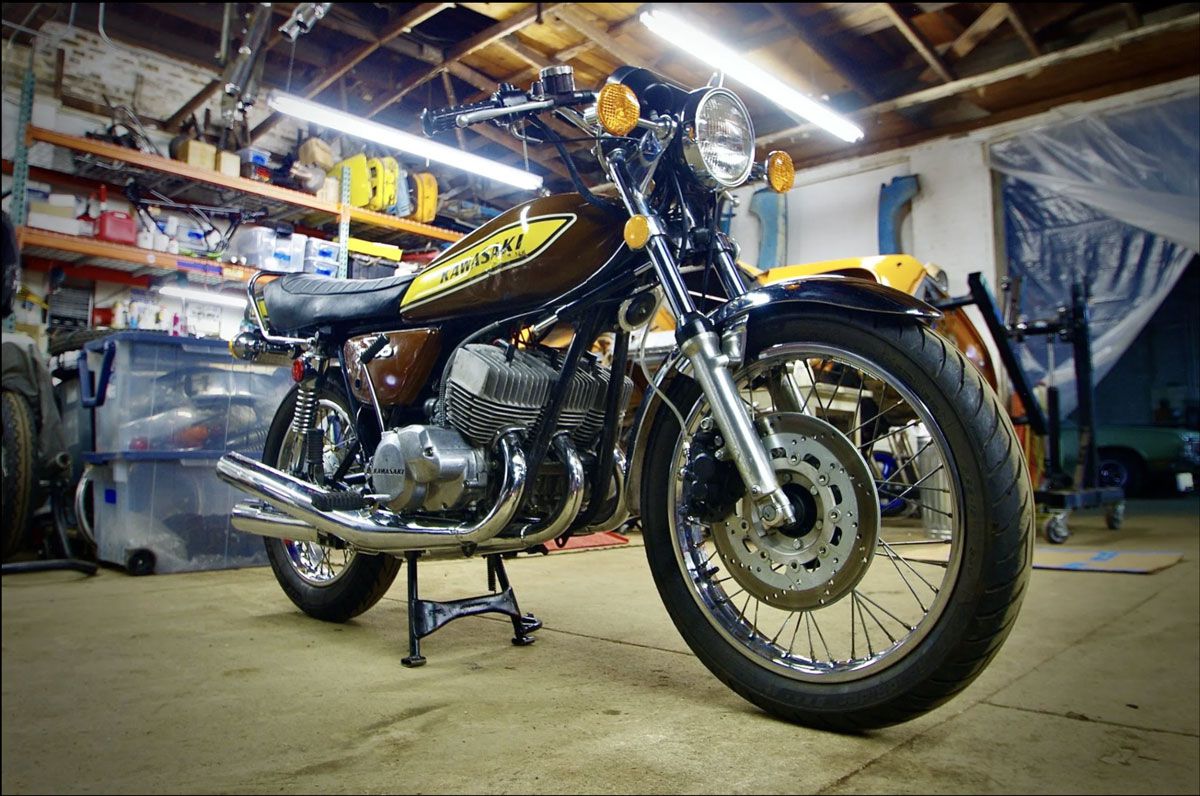 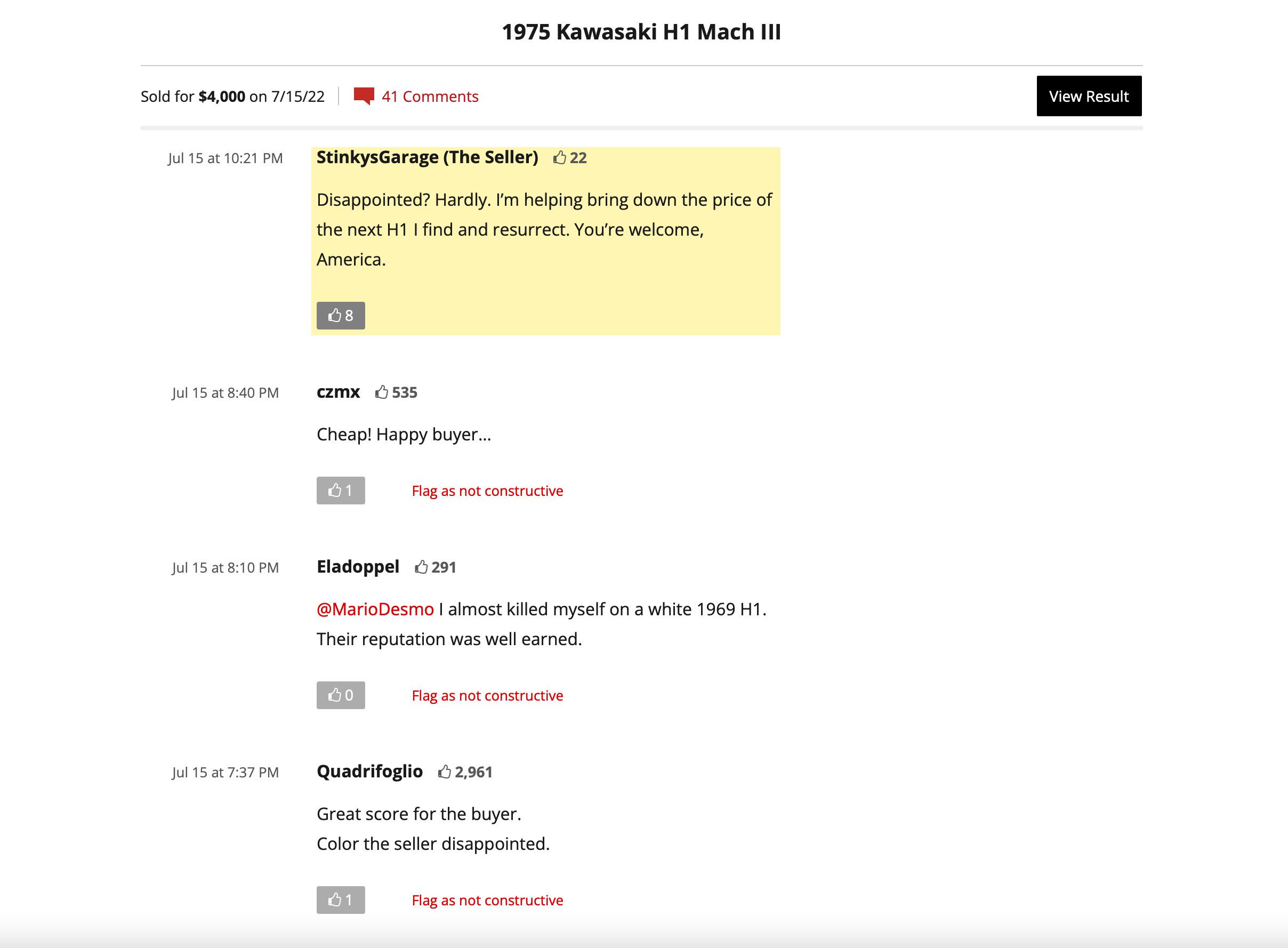 Doing my best to keep H1 prices in check: the final word. (Anders T. Carlson/)
Sign In or Register to comment.