Even CNN’s Chris Cillizza Is Mocking the White House For Recession Spin: ‘I Was Laughing to Myself’

CNN editor-at-large, Chris Cillizza, mocked the White House for their attempted spin on the definition of a recession, saying it had him “laughing to myself.”

The White House late last week published a blog post in which they suggested traditional definitions of a recession do not necessarily mean that this time around the economy will be on the same path.

Business Insider defines a recession as “when gross domestic product (GDP) declines for two consecutive quarters,” though they note there are other factors to be sure.

The blog post coming from the Biden administration counters, “It is unlikely that the decline in GDP in the first quarter of this year—even if followed by another GDP decline in the second quarter — indicates a recession.”

Redefining recession is not a solution to get our country out of one. pic.twitter.com/pbL3LHS9Qg

RELATED: Report: 1 in 5 Americans Are Skipping Meals As Long Lines At Food Banks Make a Comeback Under Biden

While several Republicans took aim at the White House for allegedly “redefining recession,” Newsweek notes that the entry is simply a blog post that points to an expanded definition by the National Bureau of Economic Research.

Regardless, it is clear the administration is trying to get out in front of GDP numbers set to be released later this week.

President Biden himself, when pressed by a reporter about how concerned the public should be about a recession, said he doesn’t think it is happening.

“We’re not going to be in a recession, in my view,” he replied.

NOW – Biden: “We’re not going into a recession.” pic.twitter.com/KMCKN1gf7g

RELATED: Survey: Nearly 50% of Economists Believe A Recession Is Coming

‘You Don’t Get to Change the Nomenclature’

Cillizza, normally a Biden loyalist for his network, couldn’t help but laugh at the White House for pushing a spin involving how nuanced the term ‘recession’ may be.

“I was laughing to myself with the ‘in my view thing,'” he joked. “Like. in my view, I should be drafted to the NBA. NBA executives didn’t agree with that. It doesn’t matter what you think.”

The CNN political pundit noted that two consecutive quarters of GDP decline is a “technical definition” used for some time and any spin to the contrary is an effort to “prebut” the expected economic report. 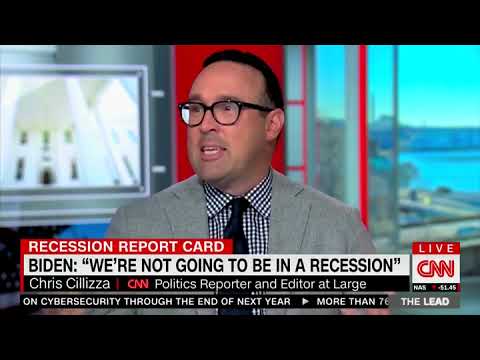 “It doesn’t really matter what you think,” Cillizza added, referencing Biden’s “in my view” comment.

“We have these terms for a reason. You don’t have to like it,” Cillizza continued. “Joe Biden’s handling of the economy was at 25% or 30% in the most recent poll.”

“It’s a problem for them, this adds to the problem, but you don’t get to change the nomenclature in the middle of a campaign because it doesn’t work for you.”

When the vaccines failed to prevent infection, they redefined vaccination.

When the economy fails to grow, they redefine recession. https://t.co/caqXmuhhIF

A recent Bloomberg survey of economists indicates nearly 50% believe the United States economy is headed toward a recession within the next year.

A separate poll by Magnify Money shows Americans are even more concerned about the state of the economy, with 70% predicting a recession is coming, along with a majority of those (59%) expecting it in the next six months.

And while the White House and the President’s personal view isn’t predicting a recession (they didn’t see inflation coming either) a new CNBC report indicates the U.S. economy is “at least teetering on a recession.”

“The economy stands at least a fair chance of hitting the rule-of-thumb recession definition of two consecutive quarters with negative GDP readings,” they write.

How far the White House will attempt to outrun the recession fears to come, we’ll have to wait and see.

The post Even CNN’s Chris Cillizza Is Mocking the White House For Recession Spin: ‘I Was Laughing to Myself’ appeared first on The Political Insider.