Floyd
May 16 edited May 16 in Other Political Debate

Michel Barnier, Head of Task Force for Relations with the United Kingdom

At the end of the third round of negotiations, EU/UK stalemate continued. The EU described the talks as “disappointing” and the UK “regretted” that little progress has been made. The areas of contention remain as far from agreement as in the previous rounds, with a recalcitrant UK refusing to budge, or to understand the issues.

While the UK has finally produced a paper on fisheries (not yet published) and been willing to negotiate in areas of self-interest, as long as there are few strings attached, they have not moved on fundamentals. However, the EU will not agree to a “pick and choose” approach, one that “slices sector by sector”, as has been clear from the outset and clear to anyone who followed the UK’s attempt at “cherry-picking” and “cake eating” from the first phase of Brexit. ‘Economic Brexit’ is proving as troublesome and there is little evidence of lessons being learned by the UK.

Barnier said that he believed that there was still a lack of understanding in the UK of the consequences of the UK’s choice to leave the Single Market and Customs Union. He said that: “The United Kingdom will have to be more realistic; it will have to overcome this incomprehension and, no doubt, it will have to change strategy.”

In the statement of  the UK’s negotiator David Frost, the UK appeared to also be calling for a change in strategy from the EU:  “We very much need a change in EU approach for the next Round beginning on 1 June.”

In other words, another impasse.

The UK side was first to release their statement following this week’s round, they accused the EU of insisting on an “ideological approach”. The statement claims “the so-called” level playing field rules, were a set of “novel and unbalanced proposals” which would bind the UK to EU laws or standards. They wrote that this was unprecedented and that it was “not envisaged in the Political Declaration”.

If you want to verify this please read the Political Declaration that was agreed “line by line” with the British Prime Minister Boris Johnson in October last year. There is an entire section entitled, “Level Playing Field for Open and Fair Competition” which states “the future relationship must ensure open and fair competition, encompassing robust commitments to ensure a level playing field.”

The rules are not novel – the UK when a member of the EU was a strong proponent of the very same rules, and given that UK will remain interconnected to the EU and wants a generous trade deal, it is also unsurprising that in the interest of balance the EU will require “robust” reassurances.

In Barnier’s press conference that took place later than scheduled Barnier replied to the UK statement saying: “Despite its claims, the United Kingdom did not engage in a real discussion on the question of the level playing field – those economic and commercial “fair play” rules that we agreed to, with Boris Johnson.”

The EU’s mantra from the outset of these negotiations has been ‘Zero tariffs, zero quotas, zero dumping’. The dumping refers to the level playing field provisions.

Senior British Minister Michael Gove suggested that he might be willing to renounce the objective of ‘zero tariffs, zero quotas’, in order to be freed from level playing field obligations.

Barnier said that an approach of negotiating each and every tariff line like in the Canadian and Japan agreements was not possible given the time constraints and that: “the EU would still demand the same strong Level Playing Field guarantees […] Open and fair competition is not a “nice-to-have”. It is a “must-have”.” 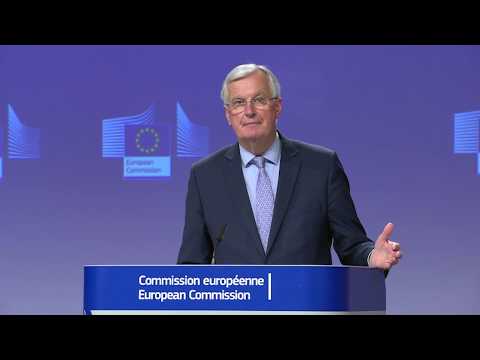 The UK repeatedly invokes Canada as a possible model for their future relationship with the EU. In its statement it brushed aside the current difficulties: “It is very clear that a standard Comprehensive Free Trade Agreement, with other key agreements on issues like law enforcement, civil nuclear, and aviation alongside, all in line with the Political Declaration, could be agreed without major difficulties in the time available.” However, it is clear from their requests that the UK wants a great deal more.

Barnier pointed out the mismatch between the UK’s exhortations of only wanting a “Canada-style” deal (CETA) and its actual requests for cooperation that goes well beyond the Canada agreement, including: freedom of movement of most service providers, a continuation of existing arrangements on electricity interconnection, to maintain the current system for the recognition of professional qualifications, co-decision in relation to equivalence decisions in the are of financial services, to name a few examples. It’s also interesting that the UK side thinks it can mis-explain the EU’s own trade agreements to the EU.

One of the conundrums of the British approach to Brexit negotiations under May and then Johnson premierships was their apparent ambivalence about services. While the UK may not export anything like the amount that the EU exports to the UK when it comes to goods, its trade in services is much more evenly balanced, but as this ONS graph shows the EU is by far and away the UK’s largest customer for services. The UK has made a point of saying that its market is of importance to the EU, something of which they are fully aware. 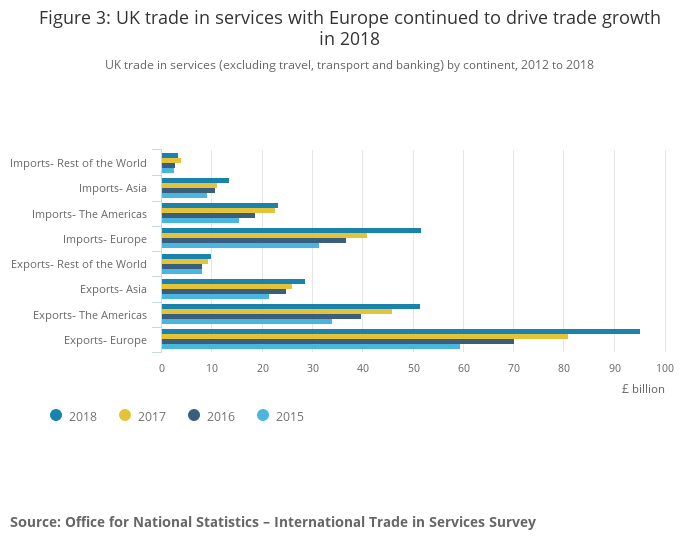 The UK is promising that it will publish its documents next week. The EU task force is anxious to share these texts with EU member states and the European Parliament, the EU side had already published its draft legal text almost two months ago.

The UK has rather belatedly woken up to the benefits of transparency stating: “In order to facilitate those discussions, we intend to make public all the UK draft legal texts during next week so that the EU’s Member States and interested observers can see our approach in detail.”

The European Parliament’s UK Coordination Group (UKCG) will no doubt be grateful for their publication; led by David McAllister MEP (DE, EPP) the UKCG will be coordinating responses drawing on the expertise of 17 parliamentary committees, covering everything from fisheries to civil rights. Their final report will be presented for a vote on 17 June, before the High-Level Conference between the EU and UK in mid-June, which will probably determine whether the UK will or will not request an extension.