The Making of the Indian Constitution – Interesting Facts

Floyd
January 2015 edited January 2015 in Other Political Debate
On 26th Jan 2015, India celebrates the 66th Republic Day with joy and gaiety.  While conveying the greetings to all the readers,  we thought of sharing some interesting facts about the significance  of this day for the benefit of our young members.
British Rule
The first Britishers entered India in 1579.  Thereafter, merchants started coming in and soon began to rule us.  In 1765, the Authority was transferred to the East India Company formally.  Then the British Parliament took over the  administration.  Indians started protesting the foreign rule even from the  18th century.  The Indian National Congress was formed in 1885 to formally fight the foreign rulers.  After the entry of Mahatma Gandhi, the freedom movement became dynamic.  Before Independence, India was governed by various Acts enacted by the British Parliament.  The Government of India Act 1858, the Government of India Act 1909, the Government of India Act 1919 and finally the Govt. of India Act 1935 framed by the British Parliament governed Indians. (These Acts became irrelevant after Independence and the adoption of Indian Constitution)
Constituent Assembly Formed
After the prolonged struggle and negotiations, as a fore-runner of Independence, a 'Constituent Assembly' was formed with members representing different regions and religions.  The first meeting of the Constituent Assembly was held on 9th December 1946.  Many great leaders  were part of this Assembly.  On the first day, 207 members participated.
On the first day, Acharya Kriplani, one of the respected leaders, started the proceedings invoking the 'divine blessings' and proposing the name of Shri Sachchidananda Sinha (Bihar), the eldest member of the Assembly  as 'Provisional Chairman' till the Chairman was elected.
Shri C. Rajagopalachari (Rajaji) was the first member to present the credentials and sign the register to become the member of the Constituent Assembly.
On the third day, Dr Rajendra Prasad was elected as Chairman of the Constituent Assembly. The designation 'Chairman' was subsequently replaced as 'President of the Constituent Assembly'.
India attained freedom and Independence on 15th August 1947 and this Constituent Assembly took the Governance of India from the British Parliament.  Lord Mountbatten was requested by the Constituent Assembly to continue as Governor General for some time.  Shri C. Rajagopalachari (Rajaji) took over as the Governor General on 21st June 1948 and he continued till 26th Jan 1950. Rajaji was the first Indian Governor General of India.  After 26th Jan 1950, the Governor General post was made as President of India.  Dr. Rajendra Prasad become the first President of India.
Framing Draft Constitution for India. 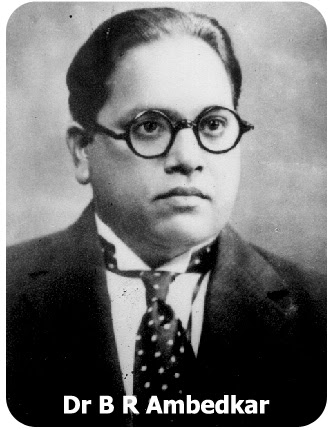 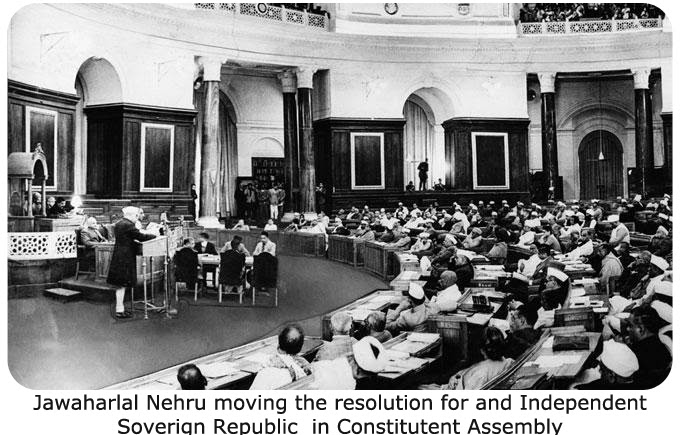 The Constituent Assembly discussed this Draft Constitution in 114 sittings, spread over 2 years 11 months and 17 days thoroughly. The final Constitution was adopted by the Constituent Assembly on 26th November 1949.  This day is also known as National Law Day.
Constitution Document Signed
On 24th January 1950, 284 members of the Constituent Assembly signed the document and presented the official Constitution to the nation.  Two hand-written copies of our Constitution (one in English and the other in Hindi), illuminated by artists and one print copy of English Version were signed by the members.
After putting their signatures, all the members including Dr. Rajendra Prasad (President of India Elect) and other members sang Vandemataram and Jana Gana Mana in chorus, symbolising a great achievement of the Sovereign Independent Republic of India, after a struggle of nearly three centuries. 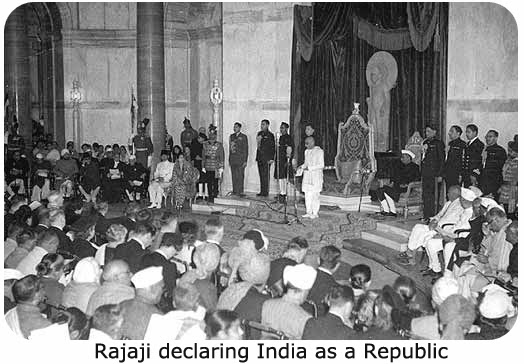 If you want to read the proceedings of the Constitutent Assembly verbatim, please click the link http://164.100.47.132/lssnew/constituent/vol12p1.html
This Constitution came into force on 26th Jan 1950.  From that day, India is a Sovereign Independent Republic.
When the new Constitution was signed by the members on 24th Jan 1950, it was drizzling outside the Parliament at Delhi.  It was considered by them as a good omen.
This Constitutent Assembly was made a 'Provisional Indian Parliament' from 26th Jan 1950.  The first General Election was held in 1952 and the 1st Lok Sabha was constituted. 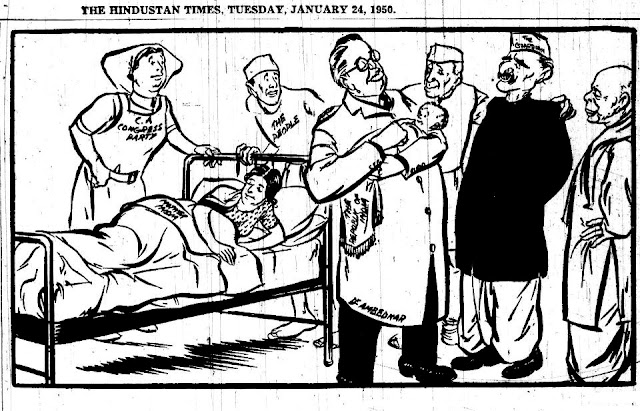 This cartoon was published by Hindustan Times on 24th January 1950, two days before the first Indian Republic Day.  This cartoon was drawn by the popular cartoonist Enver Ahmed.  In this cartoon, Mother India gives birth to a baby called 'The Republic of India' and the DOCTOR Ambedkar holds the baby in his hands and gives a gentle touch.  Congress Party is depicted as Nurse.  The people of India, Jawaharlal Nehru, Dr Rajendra Prasad and Sardar Vallabhai Patel are looking at the new born baby with great anxiety.
Indian Constitution - Some interesting facts
The Indian Constitution, drafted by great visionaries, continues to be one of the best constitutions in the world. Many global legal experts have praised our constitution.  The Indian Constitution contains 22 parts, 395 articles, 12 schedules and 2 appendices. Over a period of 66 years, the Constitution has undergone 99 amendments.  The last amendment being the formation of National Judicial appointments Commission.
We are publishing the finer details for the benefit of all the youngsters.  The freedom and soverignity we enjoy did not come on a single day.  Our elders have struggled and lost their lives in the freedom movement spread over nearly 300 years.  The great visionary leaders have also provided us a great Constitution.  None of these leaders, who had signed the constitution is alive today.
It is the responsiblity of every one of us to salute our great leaders and freedom fighters on this day and live upto their vision.

By K Srinivasan, Editor in Chief, PreSense
(Further updated and edited on 27 Jan 2016)
Sign In or Register to comment.