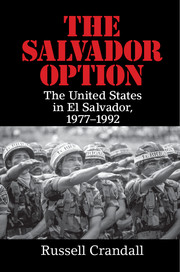 I highly recommend Russell Crandall's The Salvador Option: The United States in El Salvador, 1977-1992. It provides a terrific overview of U.S. policy towards the small country of Central America during the second half of the Cold War. Fortunately, Crandall lays out a variety of takes on the causes, conduct, and consequences of the war from a variety of he U.S., Salvadoran, regional, and global perspectives.

Nearly three decades after the war's end,  we are still trying to make sense of it all. Crandall does a very good job of moving us forward. We could still know more, however, especially how other actors responded to US actions. We know that ARENA was established because the Salvadoran right felt that they could not trust the United States, Duarte, and the military to protect their interests. The United States prevented D'Aubuisson from becoming interim president in 1982 and then president in 1984. The U.S. also prevented D'Aubuisson from entering the country. However, one of D'Aubuisson's biggest supporters in the U.S. was Senator Jesse Helms. Helms seemed to have had fewer problems engaging with the extreme Salvadoran right. The United States didn't back ARENA until the moderate Duarte had lost, moderate leaders of ARENA emerged, and the party won the 1989 elections. I still don't think that we know what we need to know about the U.S. relations with ARENA.

There's also some interesting history to learn about the U.S. government and the FMLN. It would be really interesting to focus on what contacts they maintained through the war. Some of these contacts were through the FDR, while others might have been more direct. Crandall discussed some of those contacts in 1990 and 1991. The FMLN seemed to have a pretty good working relationship with the U.S. whom they trusted more than the Salvadoran government and military. I interviewed Facundo Guardado twenty years ago and he more or less said that each commander had a CIA contact with whom they could connect if they were having problems during and shortly after the peace process. I didn't follow up.

Finally, we still don't (and probably never will) have the covert story of the U.S. role in El Salvador. In some capacity, U.S. soldiers seemed to have been in the field for most of the war. The CIA seemed to have had a different relationship with the Salvadoran right and various death squads than did the U.S. Embassy. I think that we are missing some of the more negative U.S. involvement because we have to rely heavily on what the U.S. government has released. I don't have the book in front of me but Mark Mazzettti has some of that history in The Way of the Knife: The CIA, a Secret Army, and a War at the Ends of the Earth. CIA operatives employed during the 1980s in Central America fell out of favor after the end of the Cold War when they were no longer needed. However, as you can imagine, they were pressed back into service after the 9/11 attacks.

Crandall provides some important details about the involvement of the Nicaraguans, Cubans, and Soviets in El Salvador but we don't yet have detailed access to what they know and did.

The Salvador Option is a terrific 500-page book well worth your time.
Sign In or Register to comment.