Royal Enfield will expand its lineup in 2021 with the new Meteor, a cruiser-inspired machine that’s equal parts commuter and traveler. “Easy cruising” is the aim designers set out to achieve with the Meteor. It was developed as a ground-up evolution of the Thunderbird, which is no longer a part of RE’s line in the states. There’s currently no mention of price or availability details, but we expect to see those early next year. 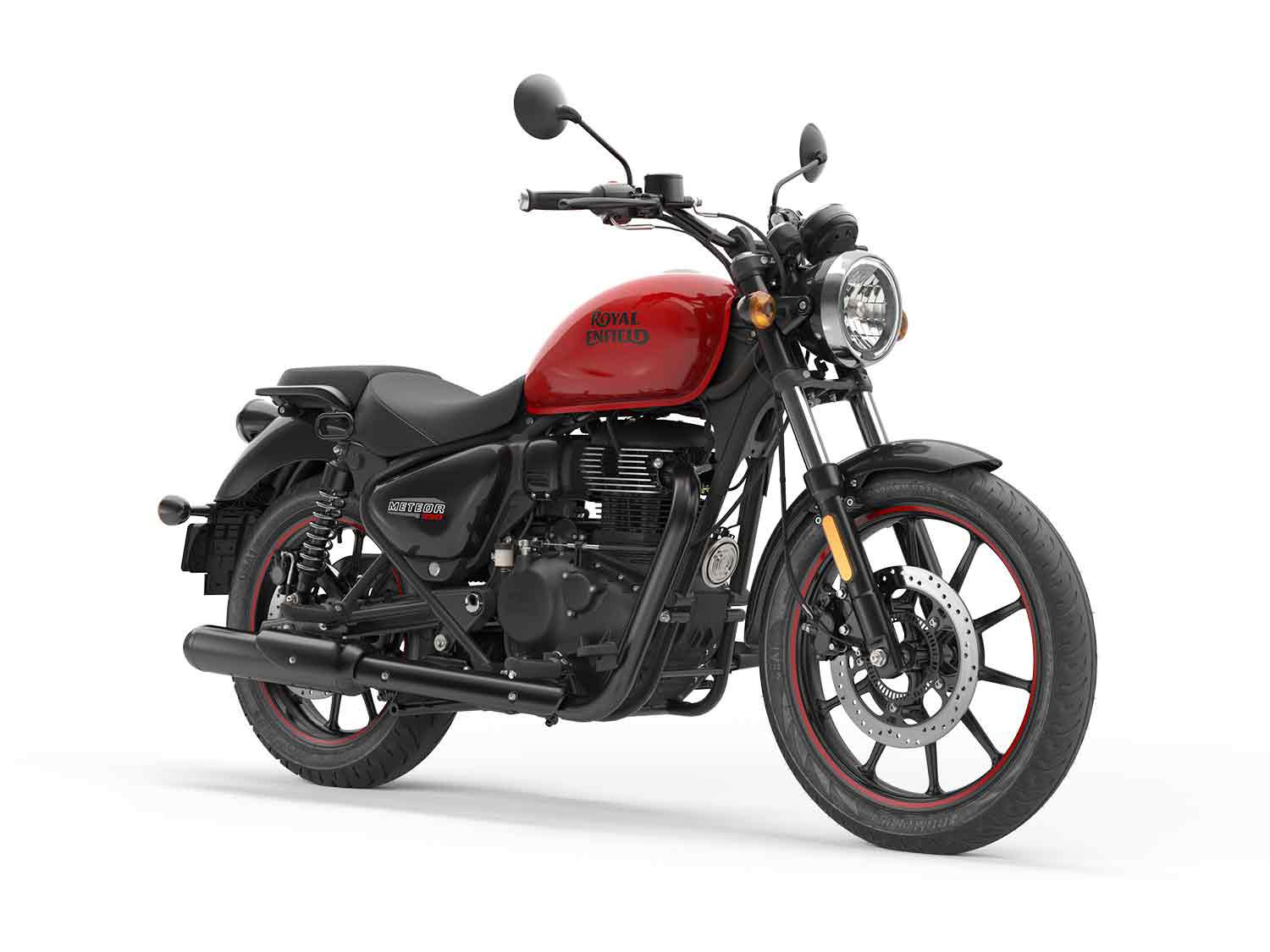 One of the many trims riders will be able to choose from. Here is the Royal Enfield Meteor in Fireball Red. (Royal Enfield/)

Designers started at the engine, which is an updated air-/oil-cooled, 349cc, J series single equipped with a balancer shaft for smoother performance in the upper rpm. The engine is capable of revving 1,000 rpm higher than the previous Thunderbird platform but still retains a low idle speed and the signature Enfield single thump. The result is an engine that puts out a claimed 20.2 hp at 6,100 rpm and just about 20 pound-feet of torque at 4,000 rpm. It’s mated to a constant-mesh five-speed gearbox and housed within a newly developed frame. 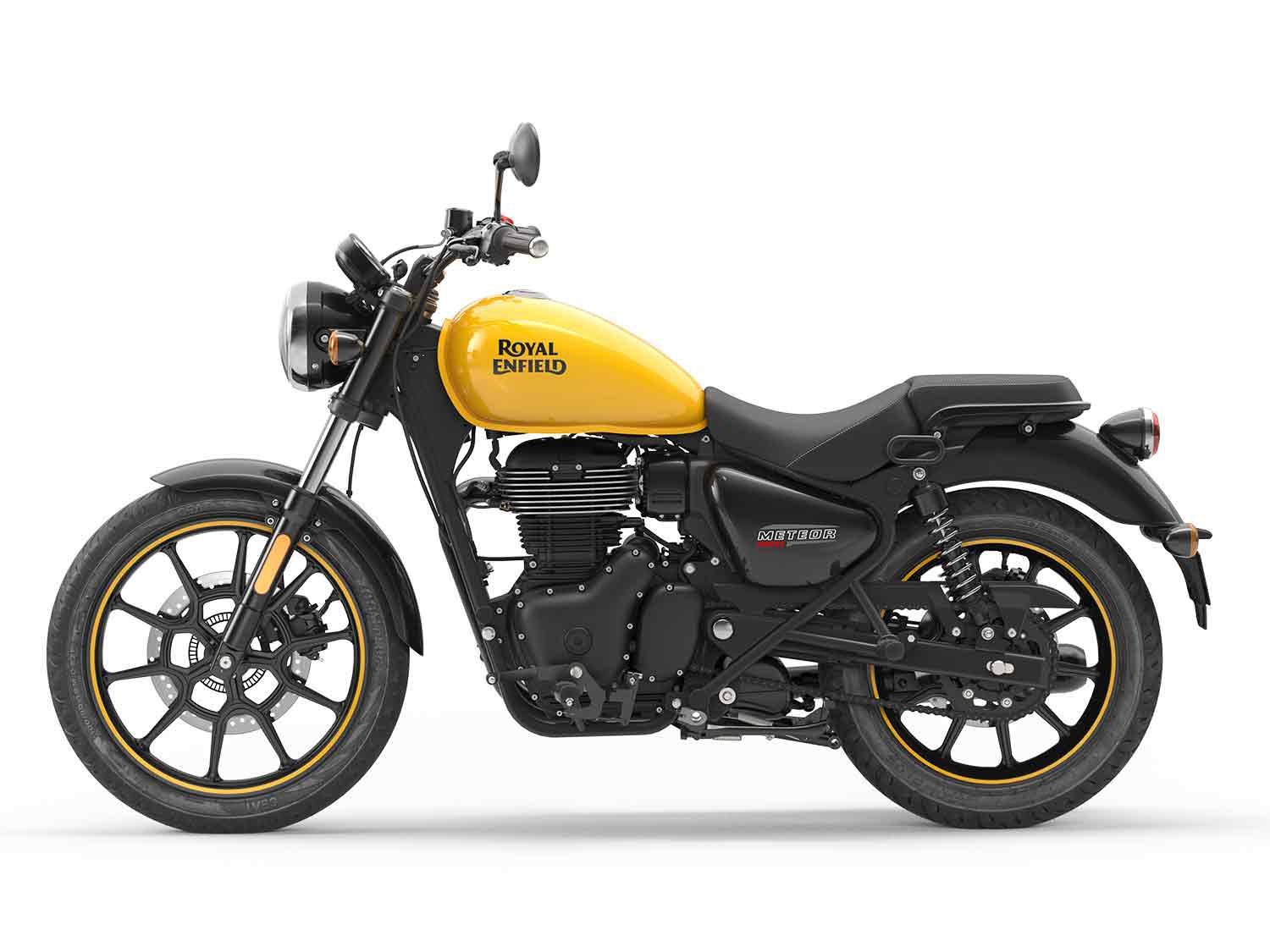 The primary objective of the new chassis design is to give riders long-range comfort as well as agility in urban environments. RE opted to go with a more rigid, twin downtube spine frame which permits geometry that balances straight-line stability with agility. The package is suspended by a 41mm telescopic fork and dual preload-adjustable shocks at the rear. A larger 300mm disc is equipped at the front with a twin-piston floating caliper, while a 270mm disc and single-piston floating caliper handle braking duties at the back. Dual-channel ABS comes standard. 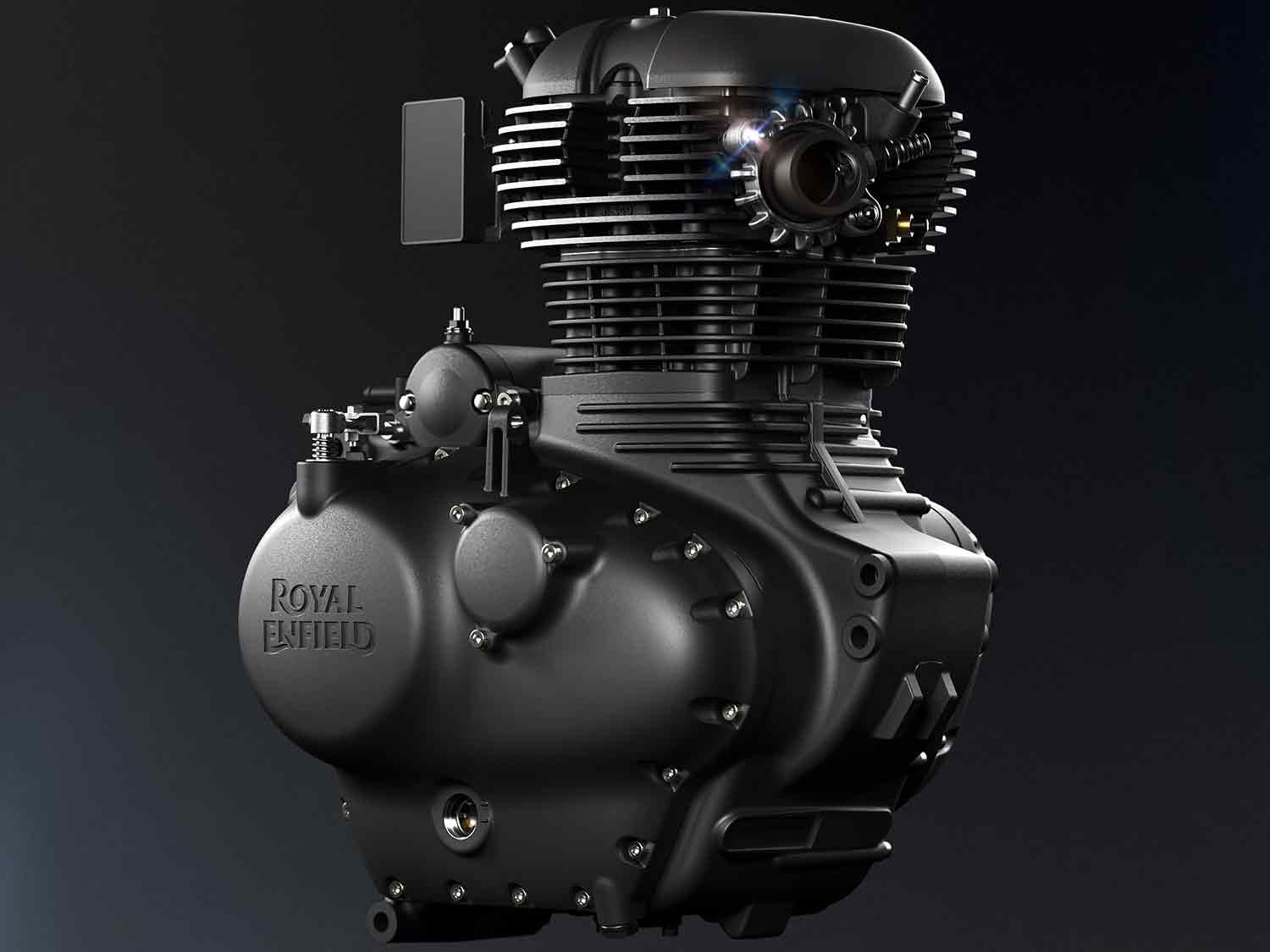 Designers created an updated 349cc single for the Meteor, adding 1,000 revs to the top-end and reducing vibrations when in the upper rpm for a better ride at higher speeds. (Royal Enfield/)

Enfield is sweetening the deal with a little bit of tech as well. The Meteor will be equipped with the Tripper navigation system, which utilizes Google Maps to provide turn-by-turn directions. It will pair the bike to the Royal Enfield app via Bluetooth. When connected, you can choose your location before you hop on the bike, and the display at the bars will give you the directions you need to get there. Large arrows on the display indicate an oncoming turn, and the display arrows will change color and flash as you get closer to, and finally begin to initiate, the turn. Designers hope this will serve as a peripheral reminder of an oncoming action without being distracting to the rider. 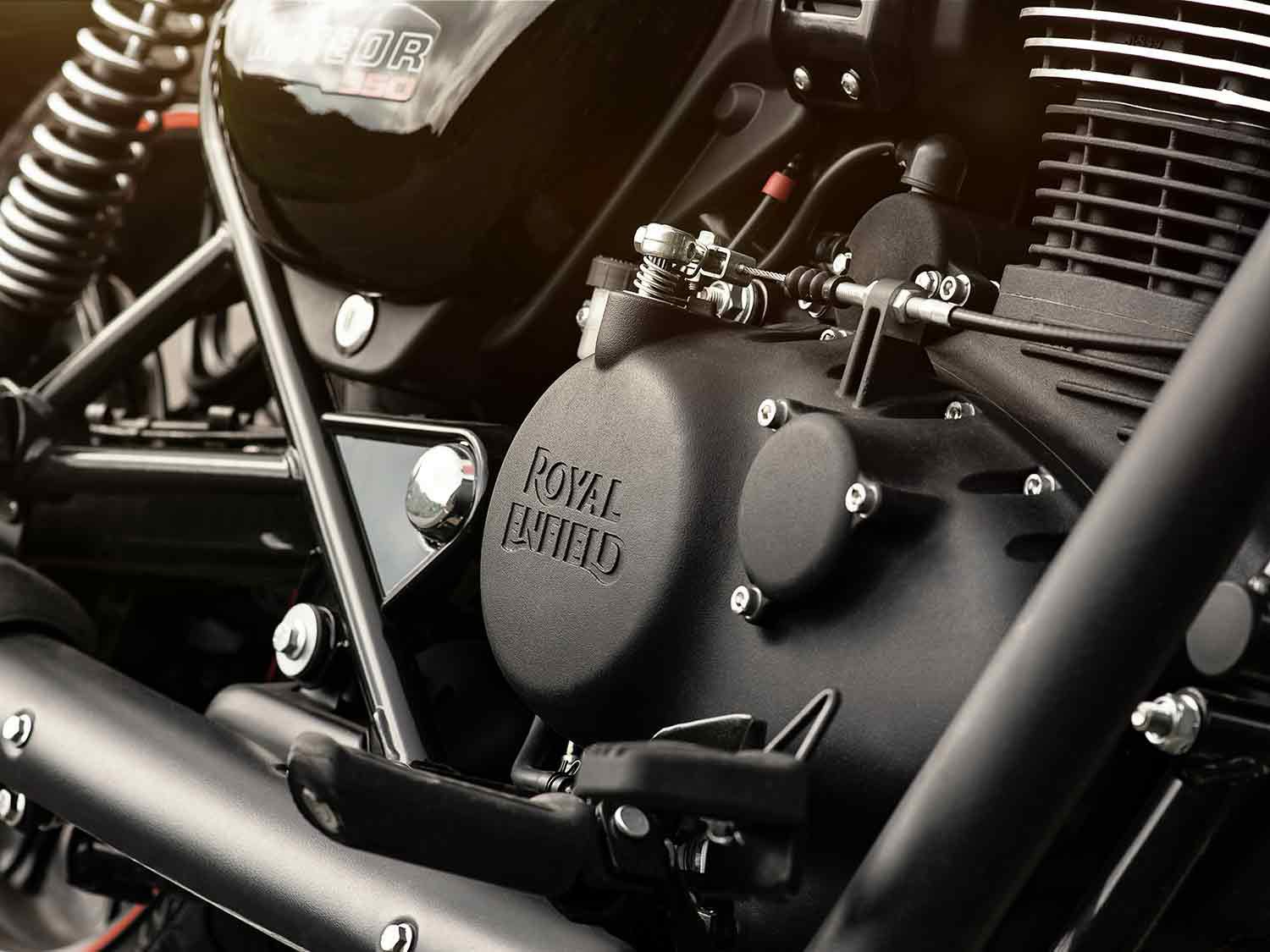 The Meteor blends comfort with both commuting and traveling chops. (Royal Enfield/)

Additionally, riders will be able to choose from custom colors, badges, covers, and more with the Make It Yours program.

We’ll announce pricing and availability as soon as it’s available. 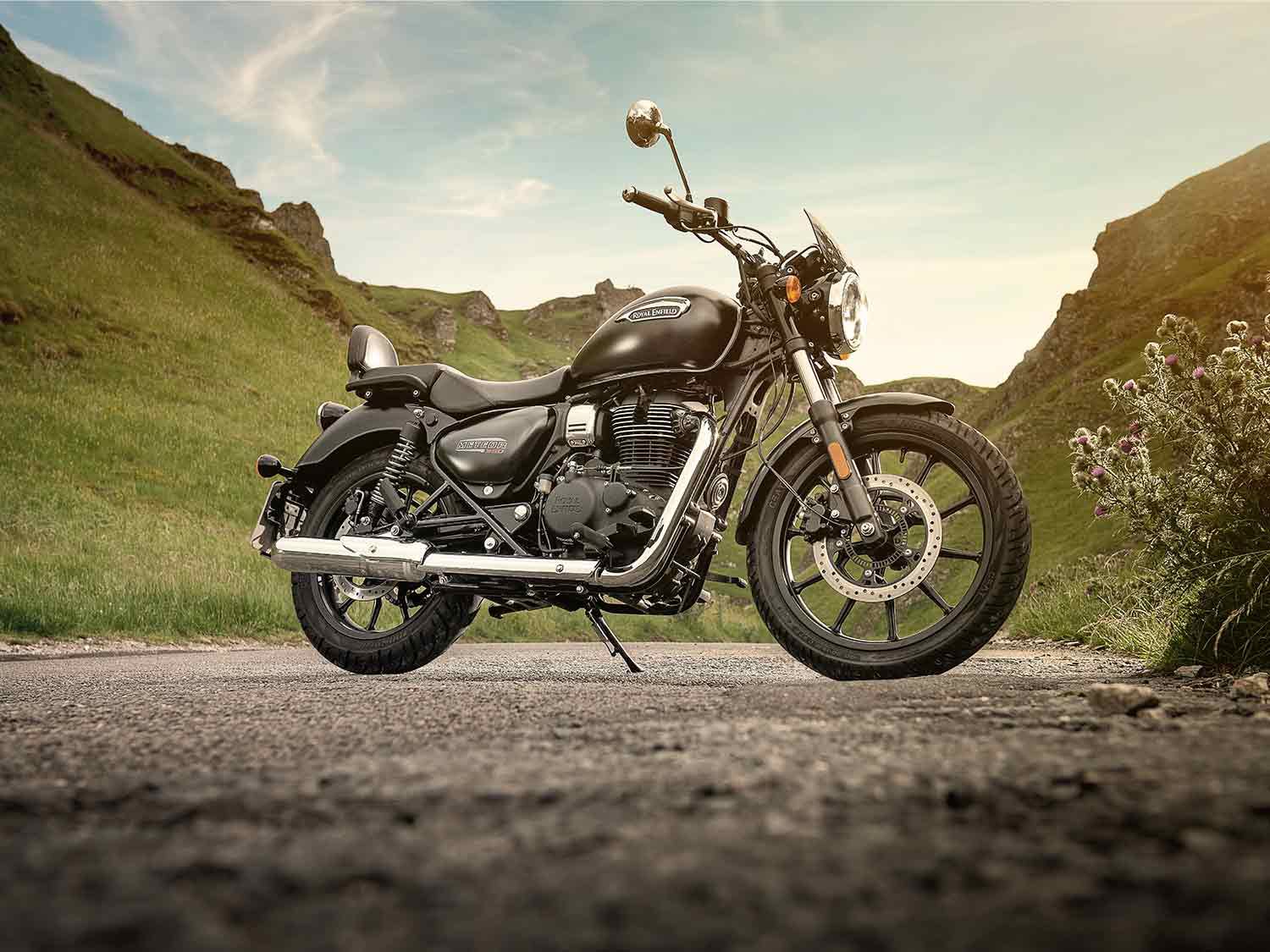 The new Meteor is all about easy cruising. (Royal Enfield/) 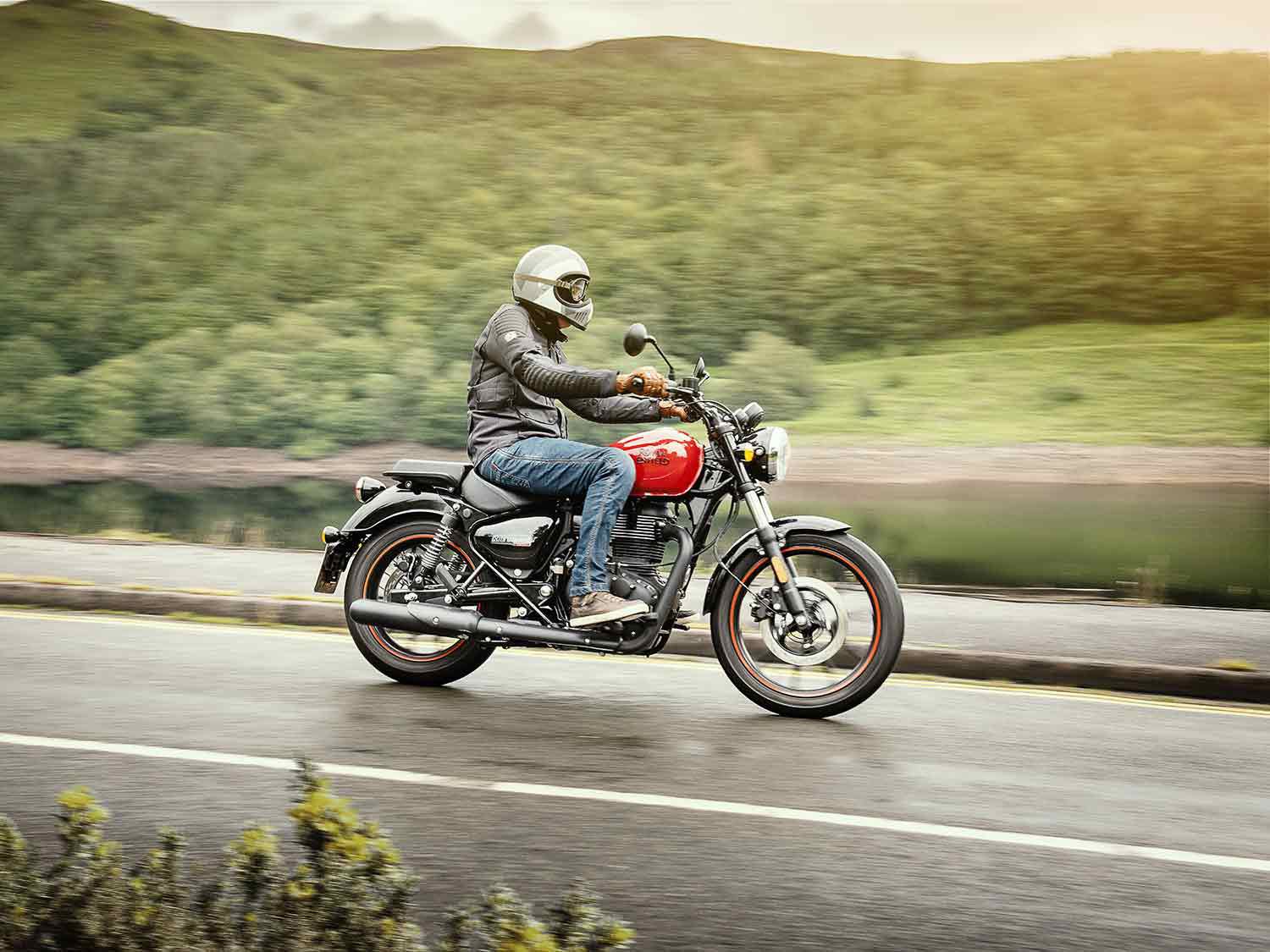 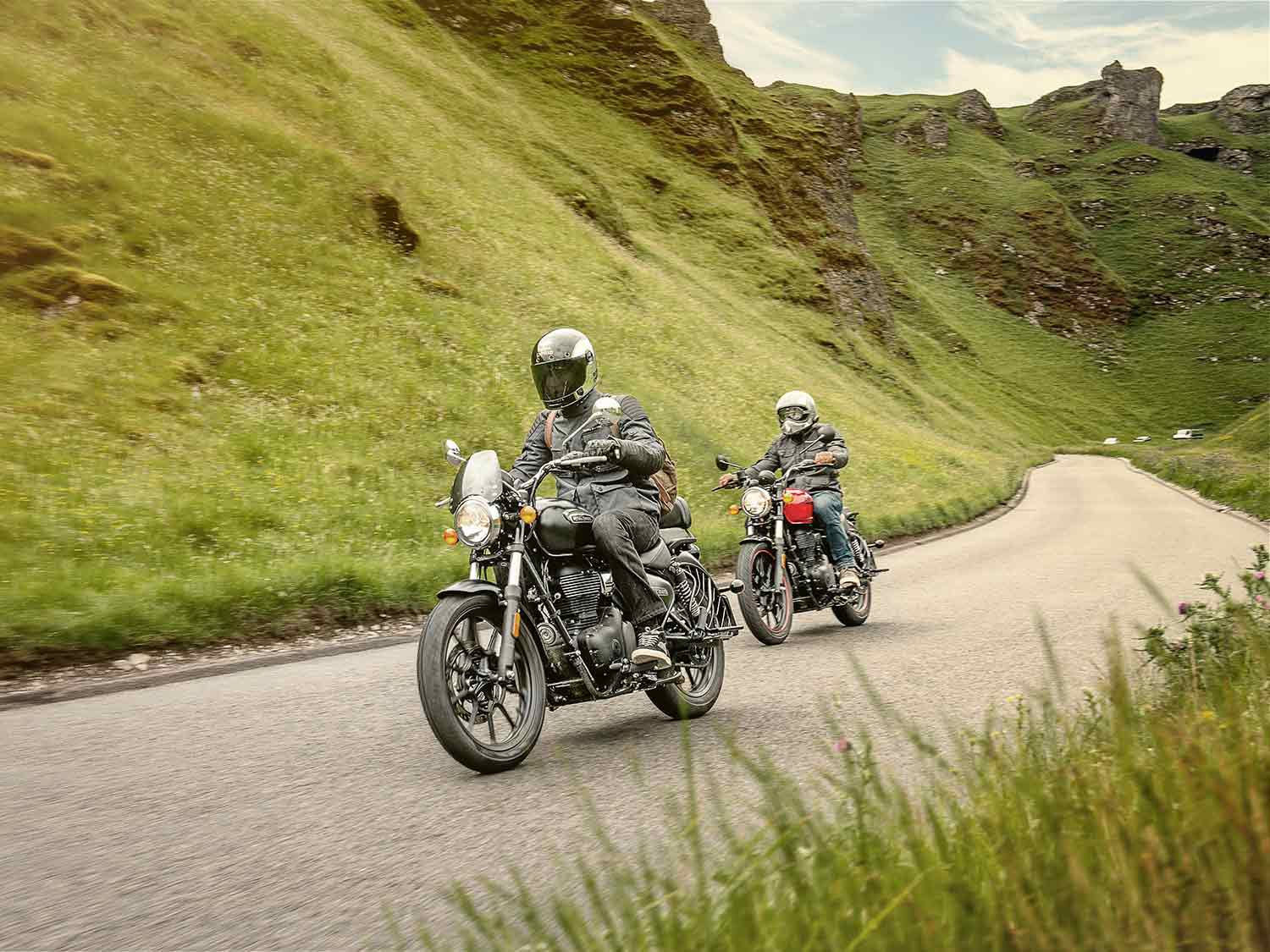 Designers wanted to create a bike that was capable all around. (Royal Enfield/) 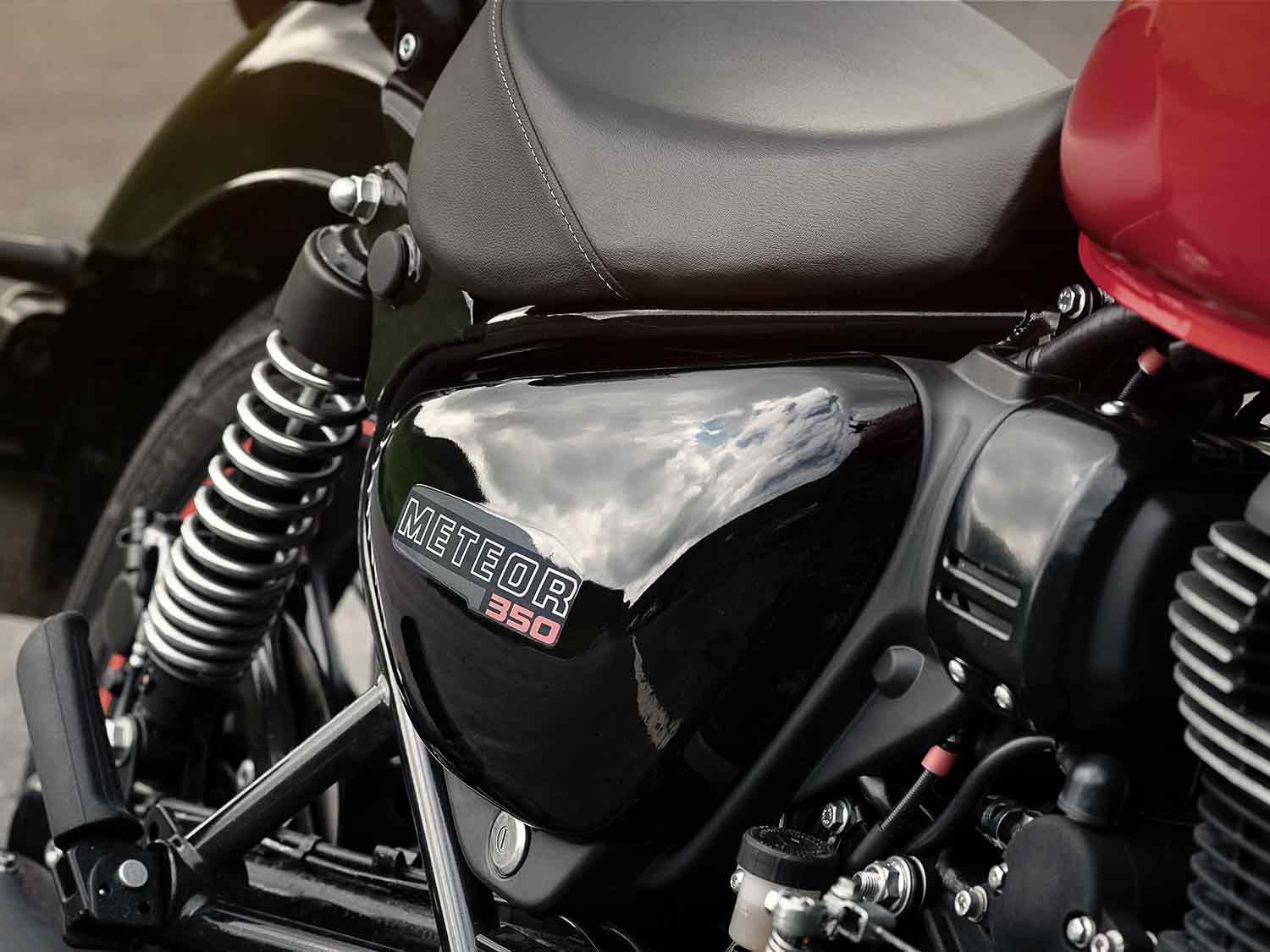 The Meteor marks a step forward for Royal Enfield, thanks to the new Tripper navigation system. (Royal Enfield/) 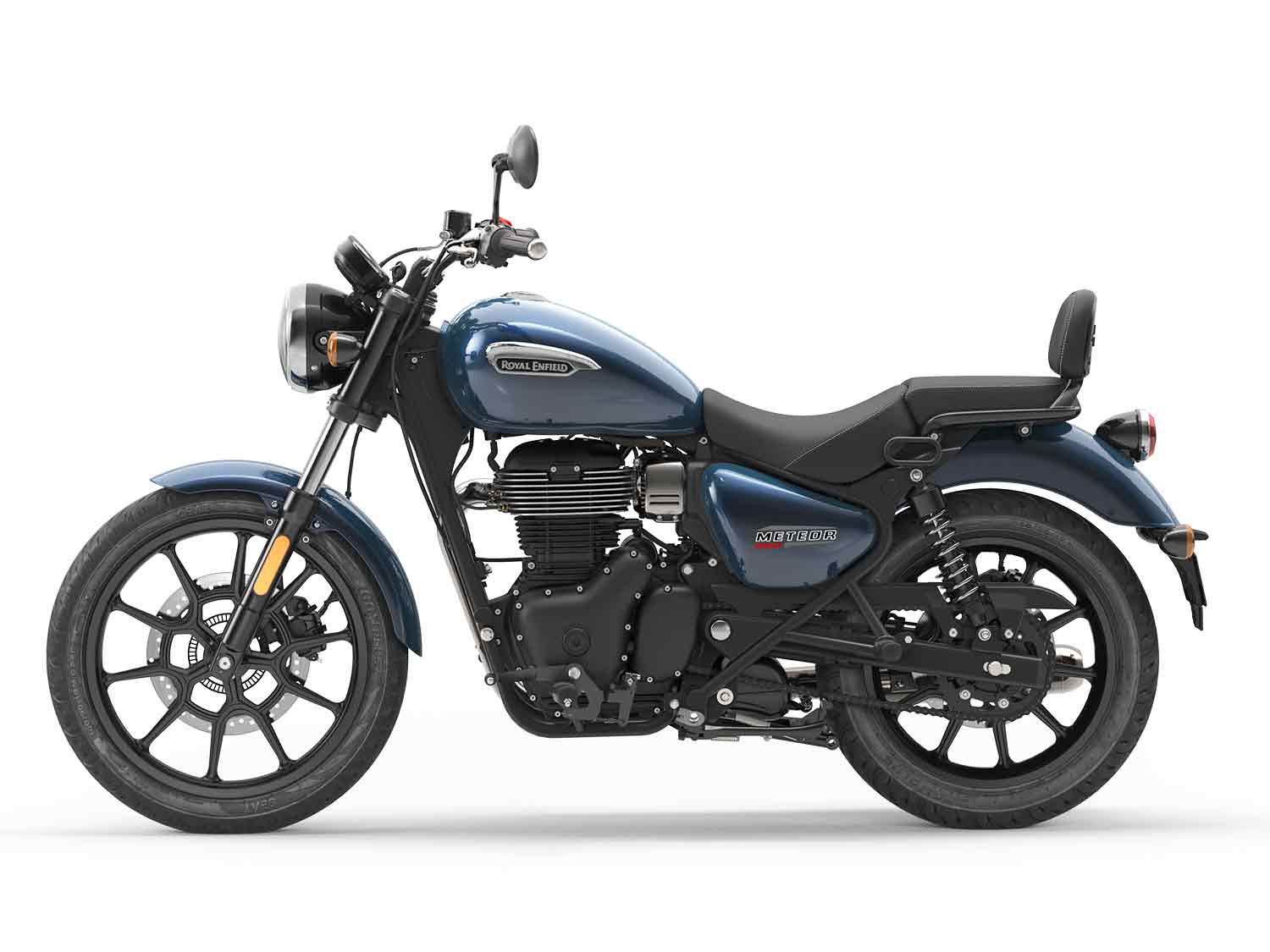 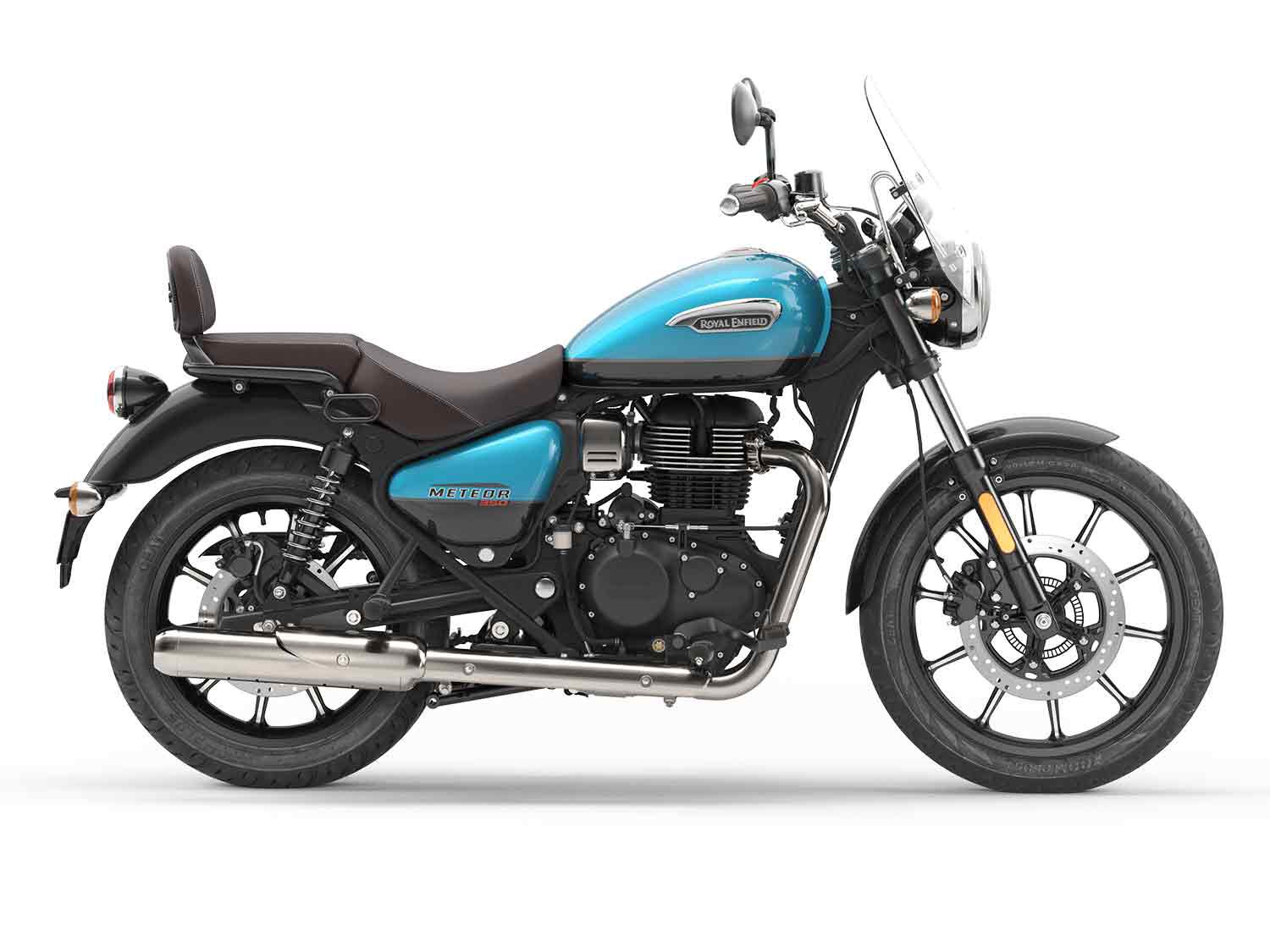 Options like windscreen and passenger backrest will all be part of the Make It Yours program. (Royal Enfield/) 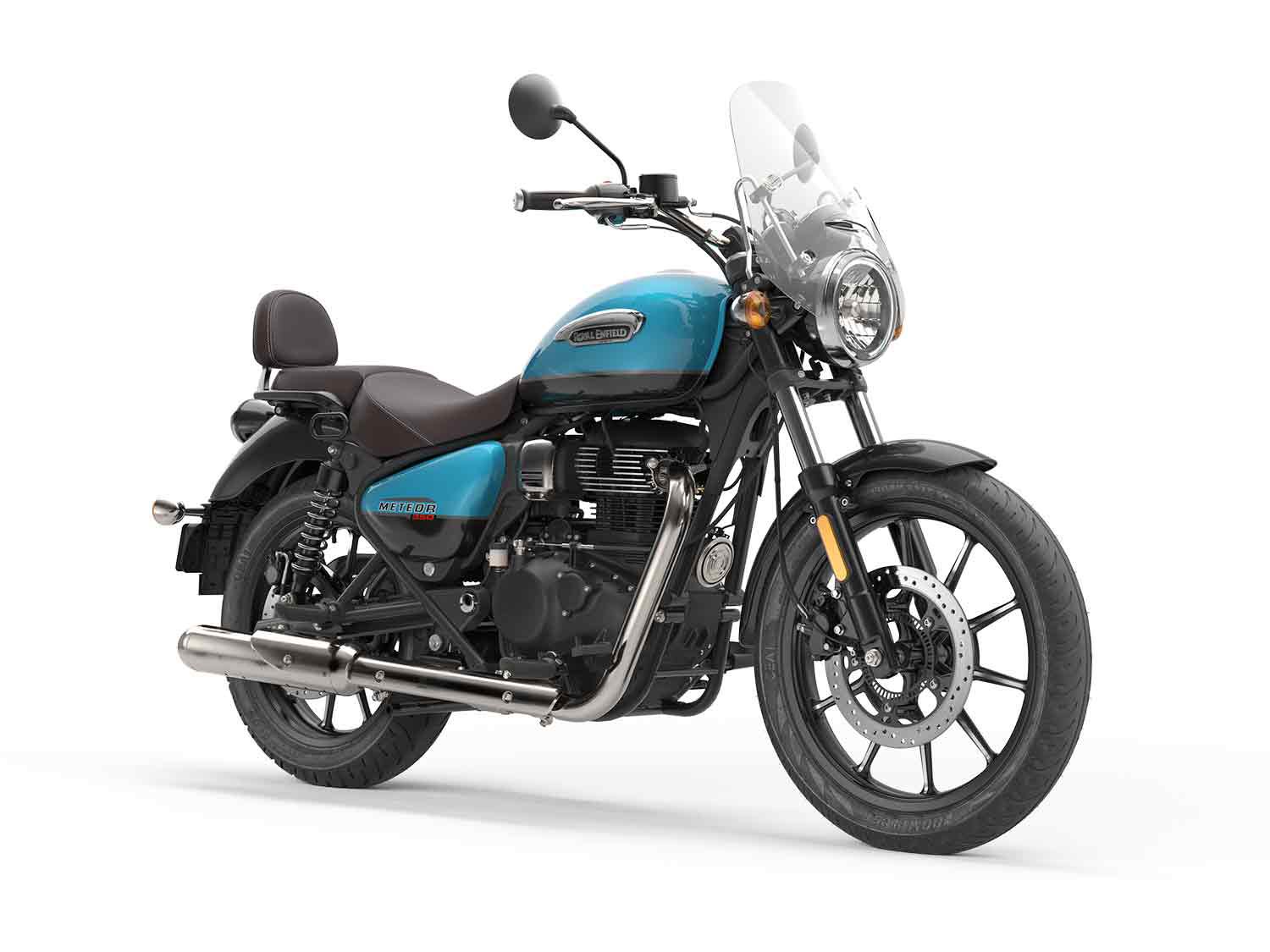