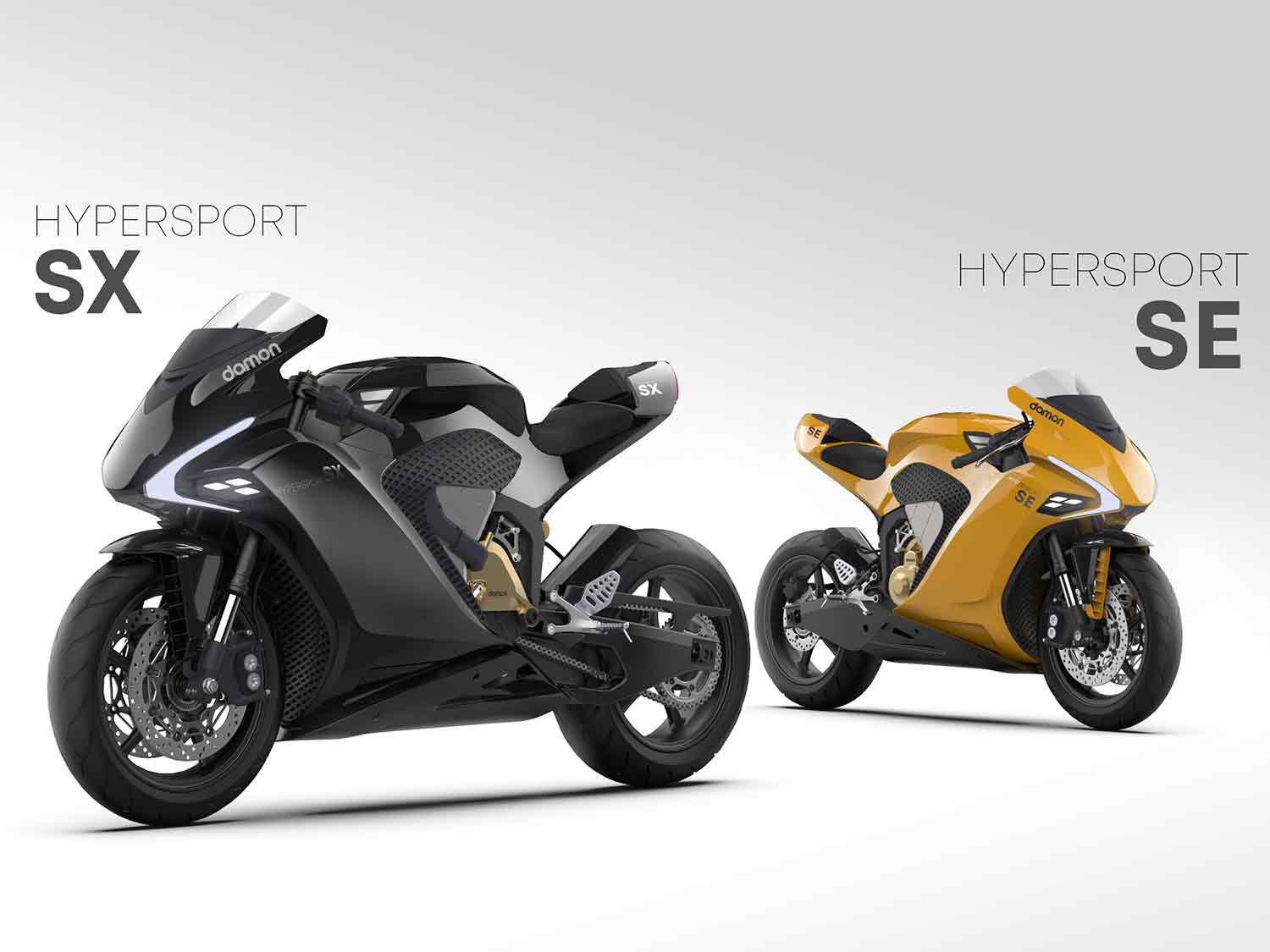 Damon Motorcycles is expanding its Hypersport line of electric motorcycles with two new models, the Hypersport SX and Hypersport SE. Both bikes are built around Damon’s new HyperDrive powertrain, a multi-platform design that the company plans to use in other models down the line.

We first looked at Damon in January of this year, after the company took home the Best in Innovation award at the Consumer Electronics Show. The premier-level Hypersport garnered the prize in part for its CoPilot and Shift technologies, both of which will come standard on the more affordably priced SX ($19,995) and SE ($16,995).

As a quick refresher, CoPilot is a safety alert system that employs radars and cameras around the bike to detect potential hazards. It will notify the rider of any impending dangers with LED indicator lights and handlebar vibrations. The rear-facing camera will also show any oncoming threats at the back. Shift alters the ride geometry of the seat, handlebars, windshield, and footpegs when a rider selects between sport mode and commuter mode.

HyperDrive is a new addition to the roster of innovations coming from Damon. 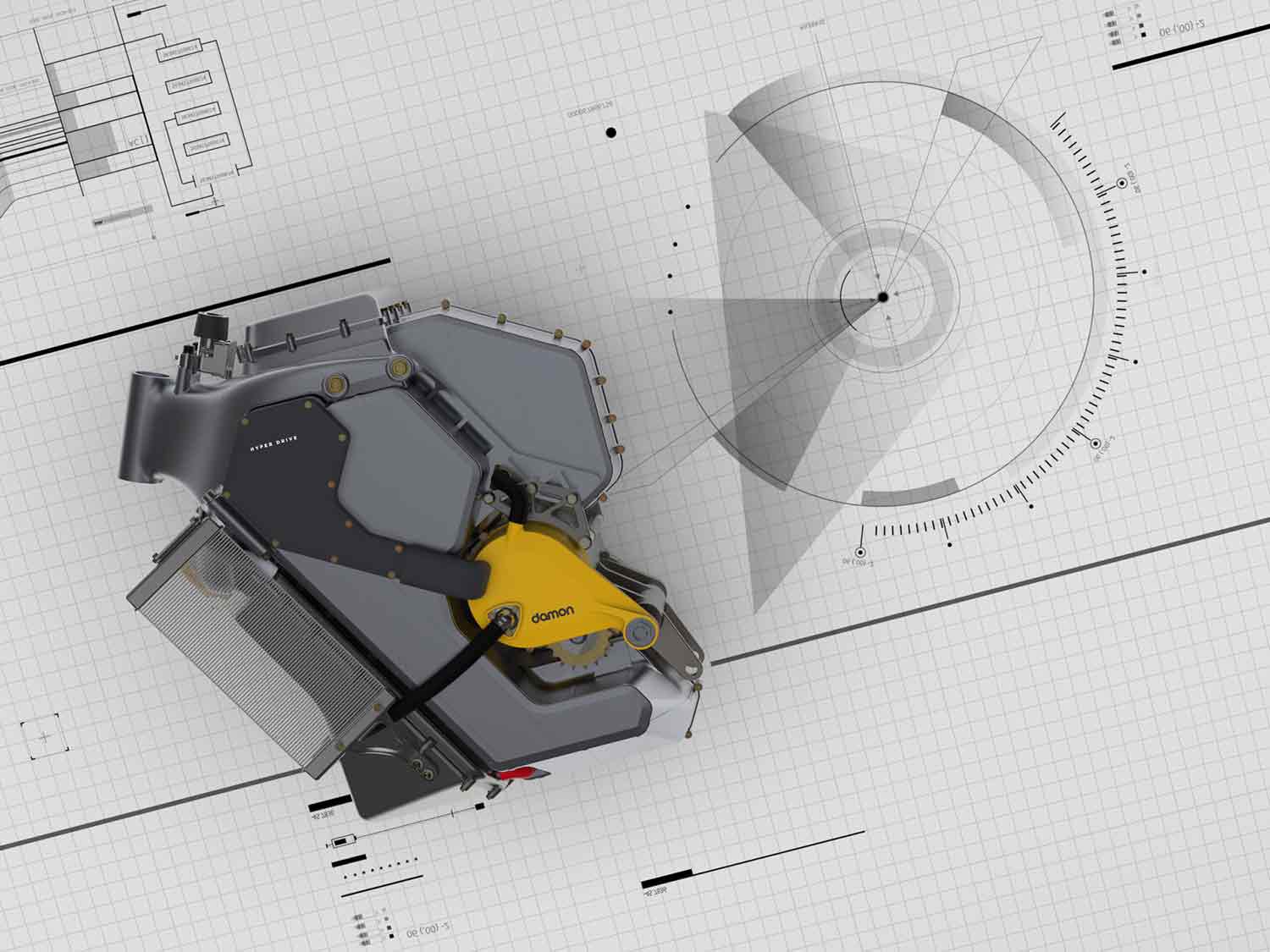 The HyperDrive is a load-bearing battery and motor unit that Damon plans to use in forthcoming motorcycles. (Damon Motorcycles/)

It’s a load-bearing battery and motor unit, performing the function otherwise reserved for a more traditional frame. It was designed to be a slim and aerodynamically efficient structural unit while also being adaptable to different battery capacities, thereby making it an optimal base for subsequent motorcycles. The SX, for example, has a 15 kWh battery that produces 150 hp and has a range of 150 miles between charges. The SE, meanwhile, has an 11 kWh battery that produces 108 hp and yields a 100-mile range.

The HyperDrive design incorporates a 48-pound PMAC liquid-cooled motor capable of reaching 16,000 rpm and a 6.6kW integrated charger that works with Level 1 and Level 2 charging stations. Riders can also plug the unit directly into any 110-volt outlet at home. A 150-plus-kW inverter utilizes proprietary algorithms to provide traction control and engine-braking functionality. 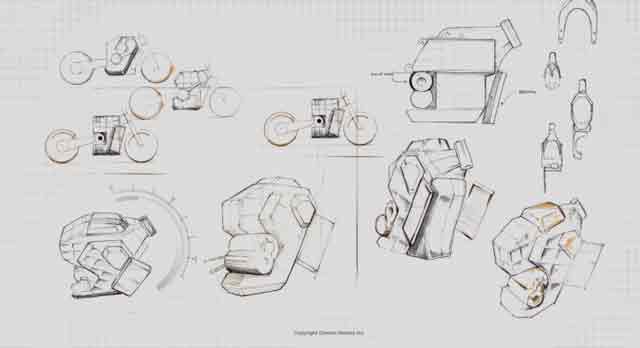 The HyperDrive was designed to be slim and aerodynamically efficient. (Damon Motorcycles/)

“As we at Damon continue to reinvent two-wheel mobility, HyperDrive lies at the heart of our innovation,” Jay Giraud, founder and CEO at Damon Motors, said in a company press release. “HyperDrive serves as the nucleus of our creations and will allow us to further evolve our technology and continue to introduce the world’s most exciting and groundbreaking electric motorcycles.”

The remaining elements on both the SE and SX are the same as you’ll get on the previously announced HS. The only difference is power and range, with the HS boasting 200 miles between charges and 200 hp. 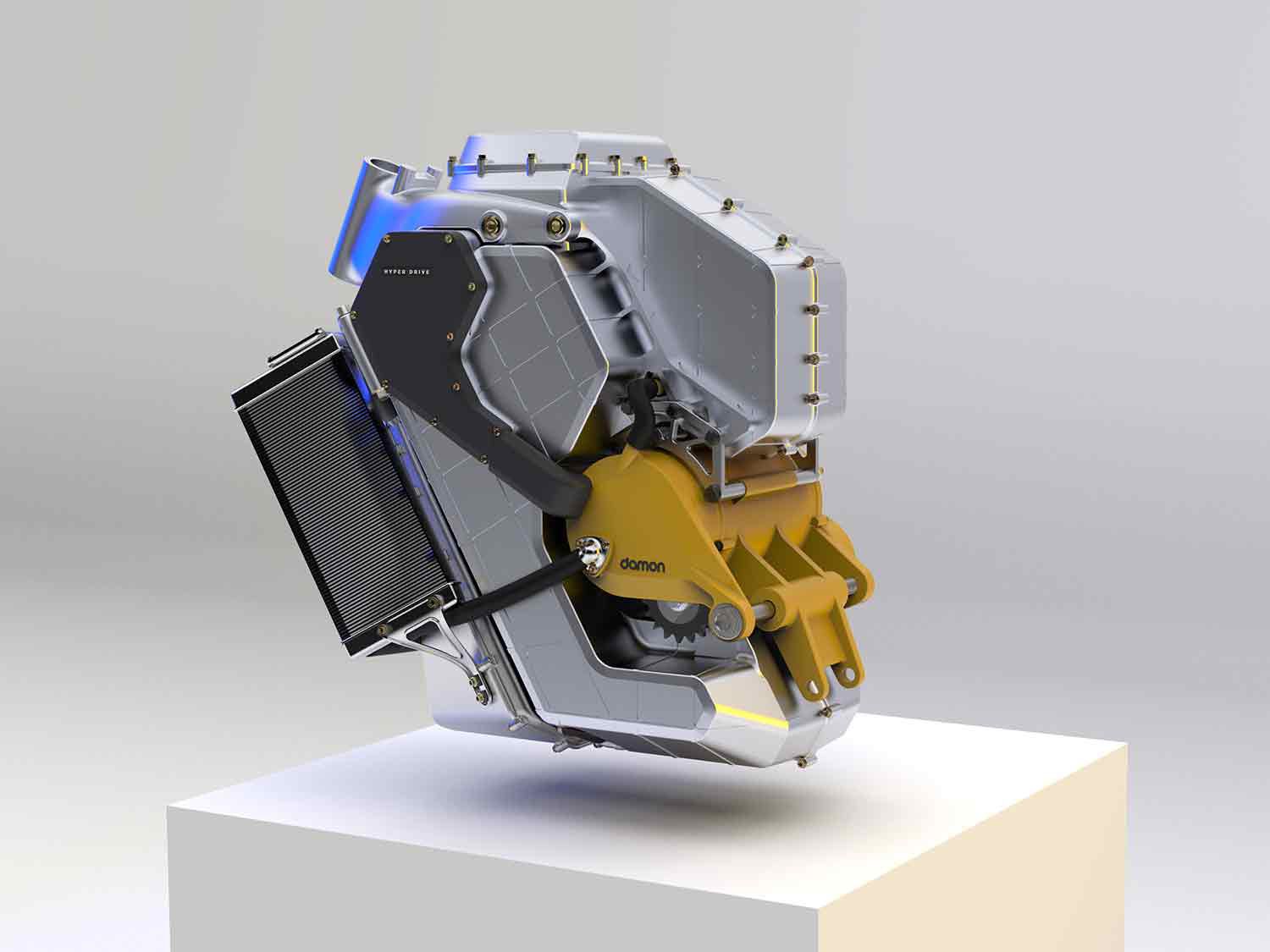 Other specs of note for the SX include a 2.2-hour charge time at a Level 2 charging station. It comes with dual 300mm discs at the front, a 32-inch seat height, and 55-inch wheelbase. Damon claims the bike will go 0-60 mph in less than three seconds. There’s no mention of suspension components or adjustability options at this time.

The SE boasts a 1.6-hour charge time at a Level 2 station. Its brake disc and layout specs are the same as the SX, as is the estimated 0-60 mph time.

Curb weight for both bikes is still to be announced.

Damon is taking reservations for both bikes now. It will cost you $100 to get your reservation confirmed.