Citing sales popularity of its Husqvarna FS 450 cousin, KTM returns to the supermoto segment with its 2021 450 SMR ($11,299). Based off the 450 SX-F motocross bike, the SMR employs the Austrian brand’s textbook manufacturing playbook. It trades moto hardware for an asphalt setup that nets a competent push-button, competition-spec supermoto for track riders who want a lighter, more manageable motorcycle versus most sportbikes. Like many dirt bikes, the 450 SMR is not street-legal and is for closed-course riding. 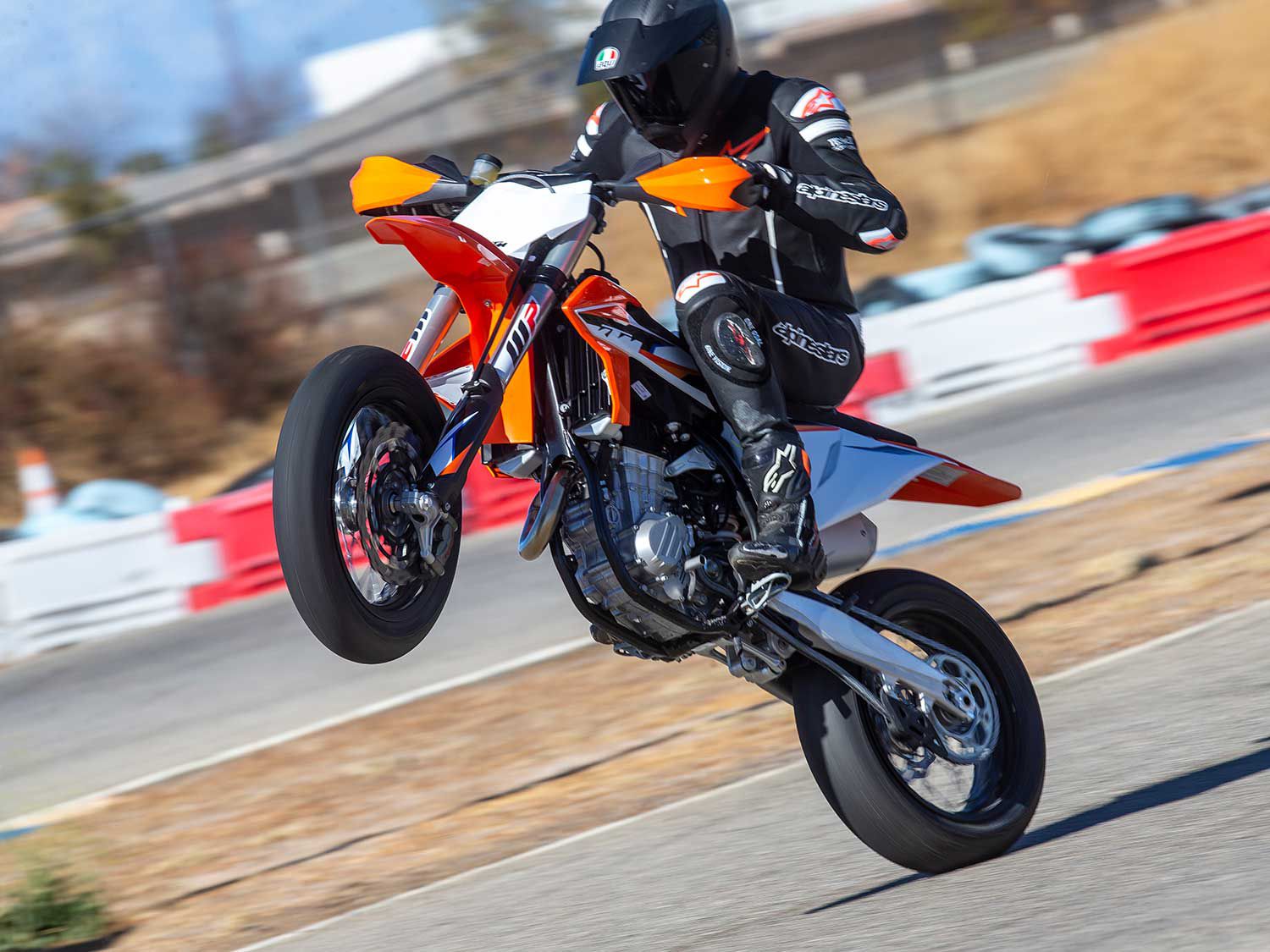 After a seven-year absence, KTM returns to the North American competition supermoto segment with its 2021 450 SMR. (Jeff Allen/)

Editor’s note: Peruse the 2021 KTM 450 SMR Supermoto First Look Preview report to get up to speed on features and technical specifications. Also visit the 2019 Husqvarna FS 450 Supermoto First Ride Review to learn what the Husqvarna version is like to command. This article describes what it’s like to ride the SMR. 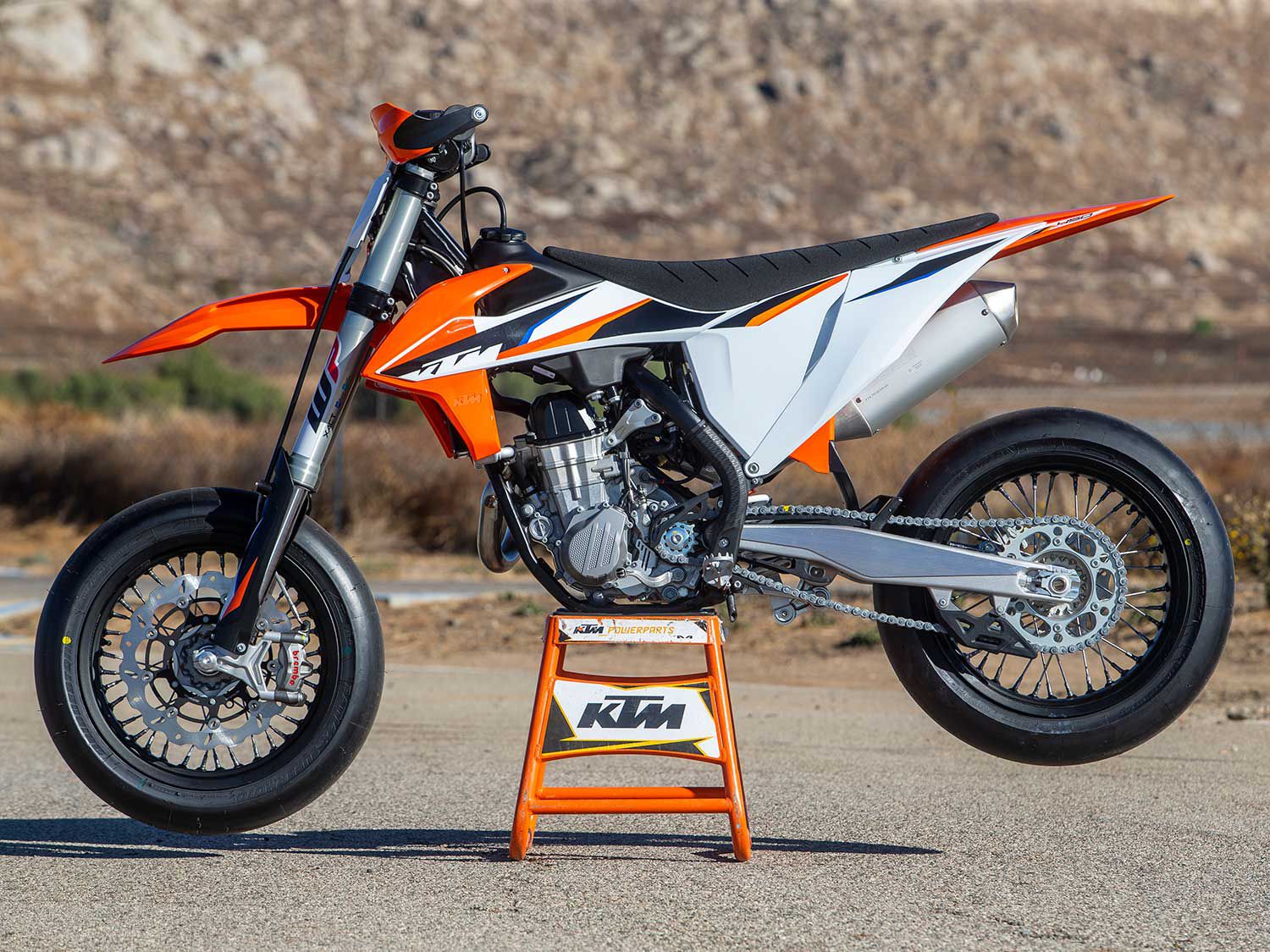 In spite of the subtle component variations (remember KTM and Husqvarna differentiate models via specific bodywork, controls, and subframe/airbox designs), the SMR isn’t that much different feeling than the FS version we tested a couple of years ago. Astute riders will notice the snappier-feeling 449cc single that builds revs more quickly. Top-end power is punchier, with around 55 ponies available at the back tire. Plus power doesn’t taper off as rapidly as we remember as the engine spins toward redline. To ease maintenance chores, an hourmeter is neatly integrated in front of the handlebar beneath the bar pad.

Related: Supermotos For Sale In 2019 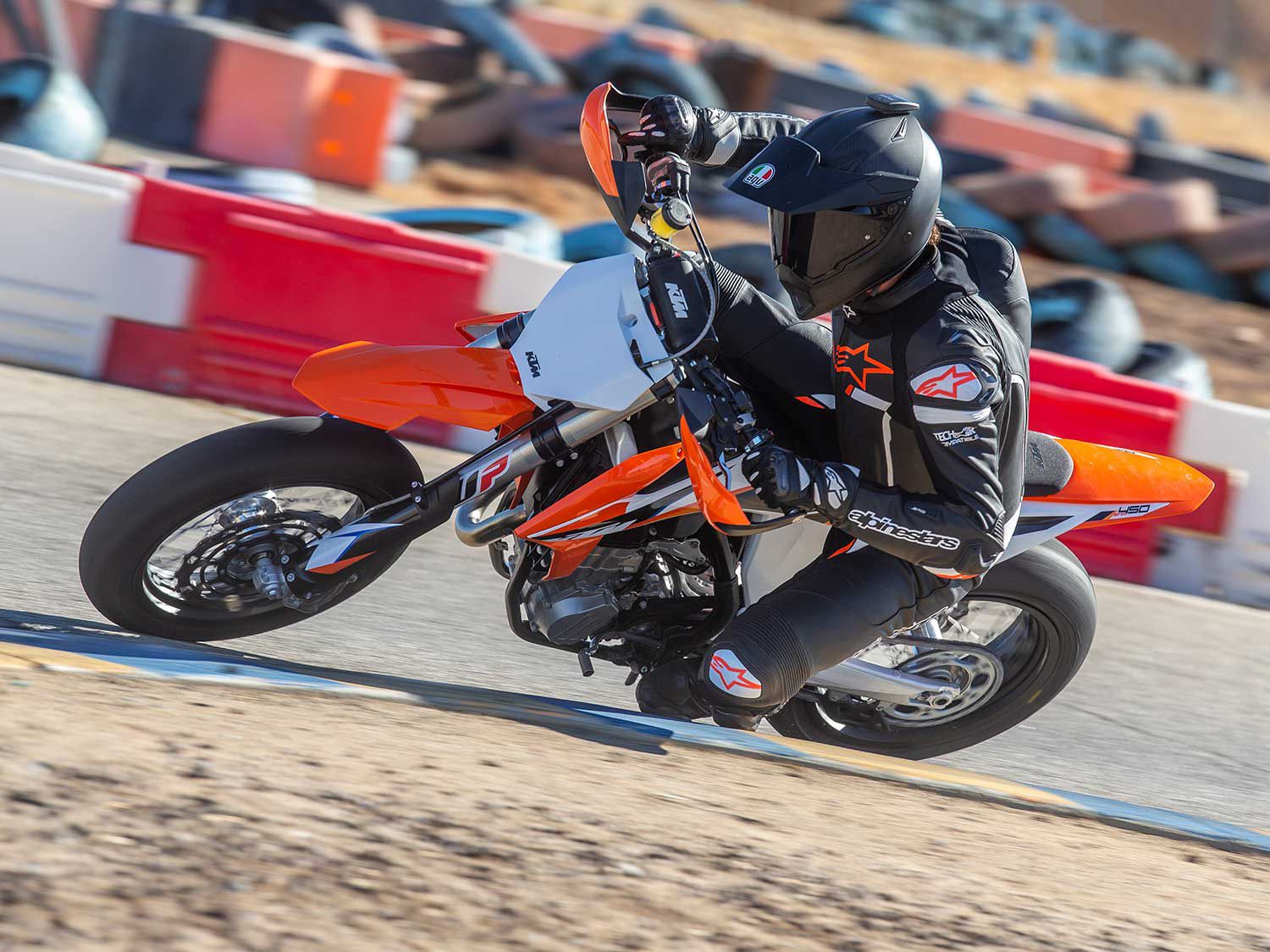 The SMR includes two engine maps (Mode 2 offers the most direct power, which we prefered. Mode 1 provides slightly softer engine response). The settings are accessed via a push-button handlebar switch. On/off traction control is also standard, however the system is rudimentary as compared to a modern streetbike (and even some eight-year-old roadbikes) appling correction via retarding ignition spark. 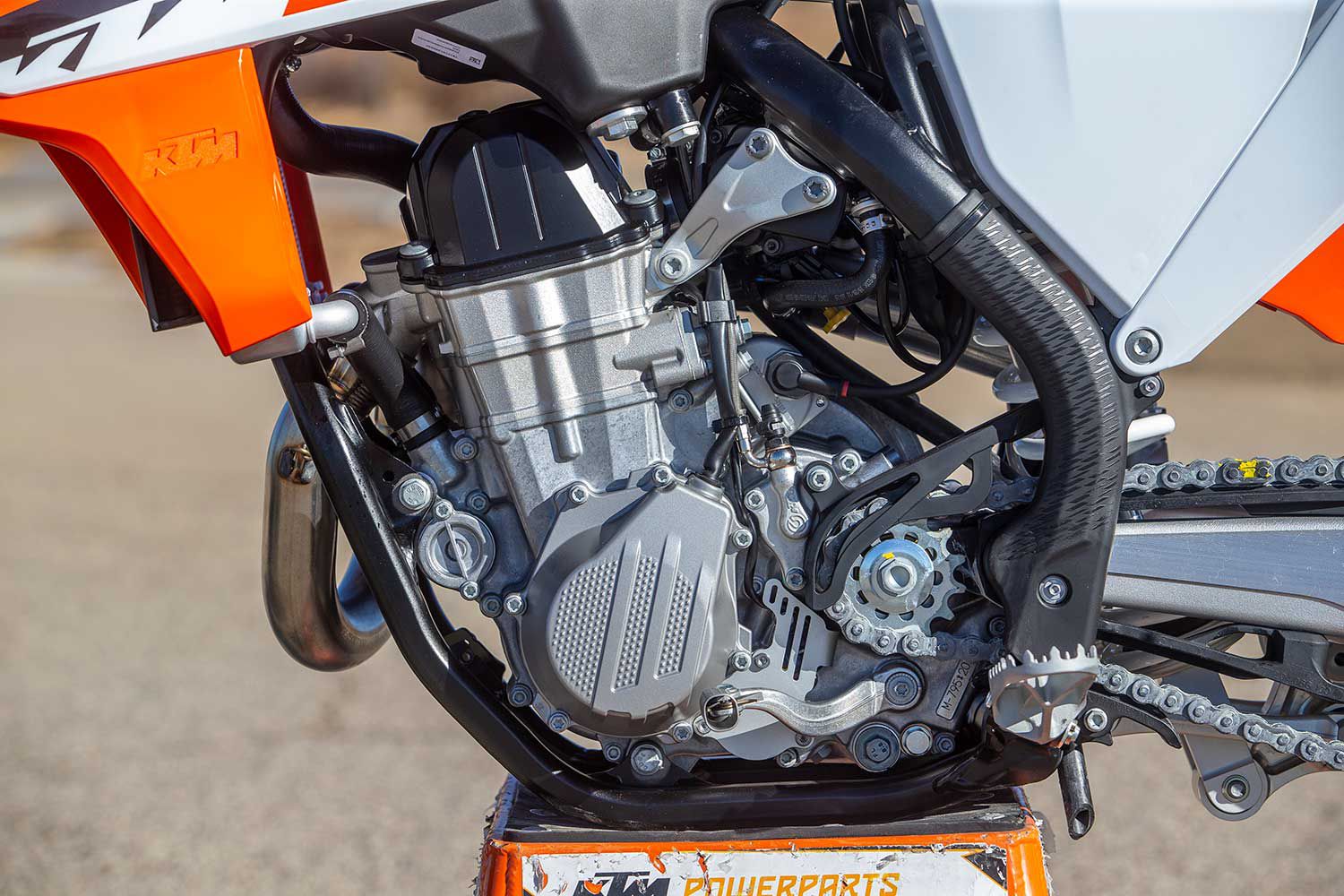 The SMR is powered by KTM’s 449cc single that’s good for nearly 55 ponies at the tire. The engine is water-cooled and fuel injected. Plus it benefits from electric start. (Jeff Allen/)

It’s certainly better than nothing, but considering how well the SMR’s rear suspension and tire combo perform, we prefer riding with TC disabled. The electronics also include a launch control setting that’s activated by pressing both the “Map” and “TC” buttons. When active, the rev ceiling is limited to help achieve a better start during a race. 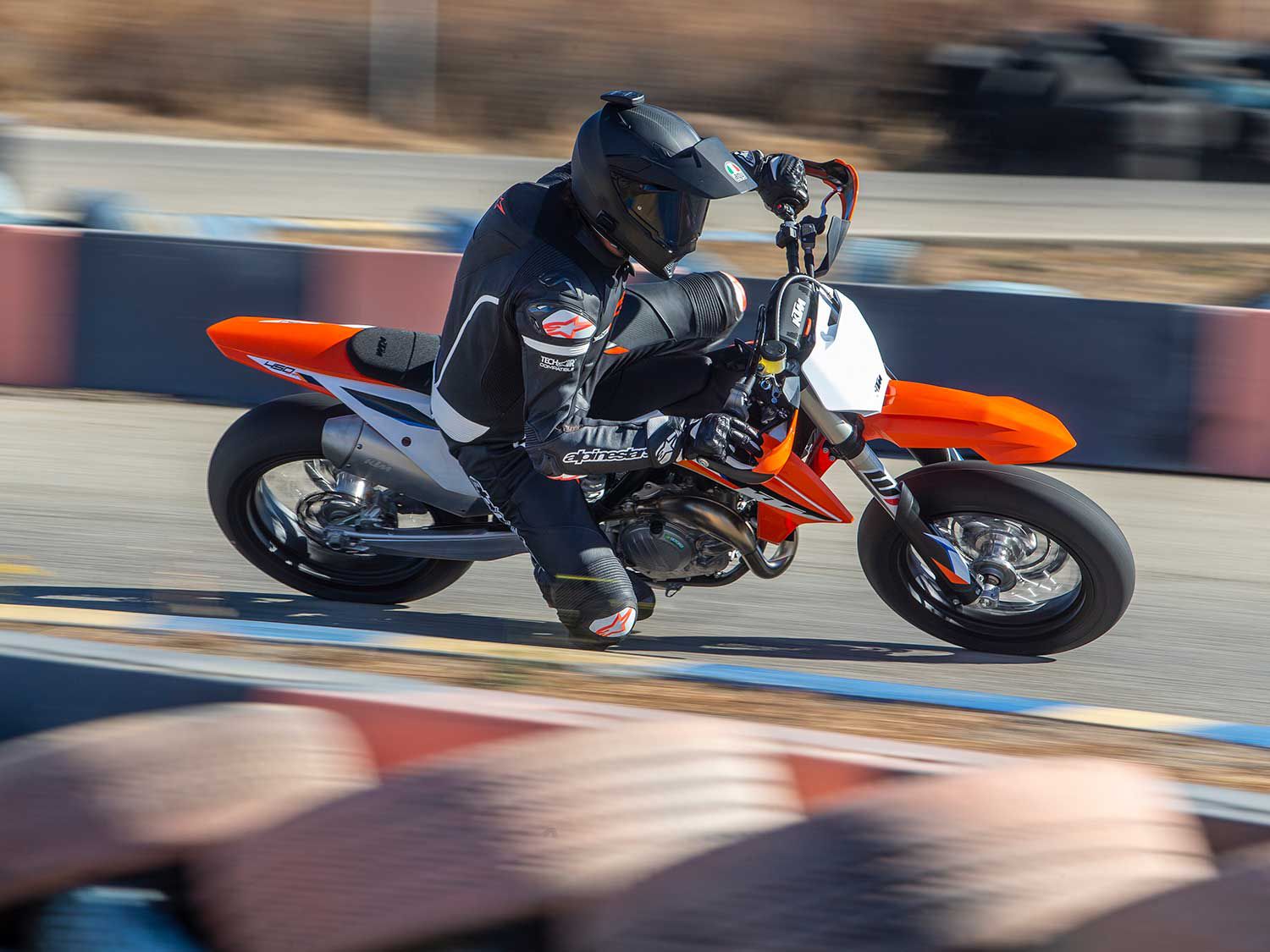 Refined suspension action is one area of improvement versus the ‘18 Husqvarna FS 450. Both suspension components offer a wide range of spring preload and damping adjustment. (Jeff Allen/)

Final drive gearing affords optimum power in each of the five gears at an eight-turn, 0.5-mile go-kart circuit, and the orange bike is good for a top speed of approximetly 90 mph. A Suter slipper clutch allows high-rpm downshifts without rear wheel chatter. This permits natural back tire slip during corner entry without having to feather the easy-squeeze Brembo hydraulic clutch lever. 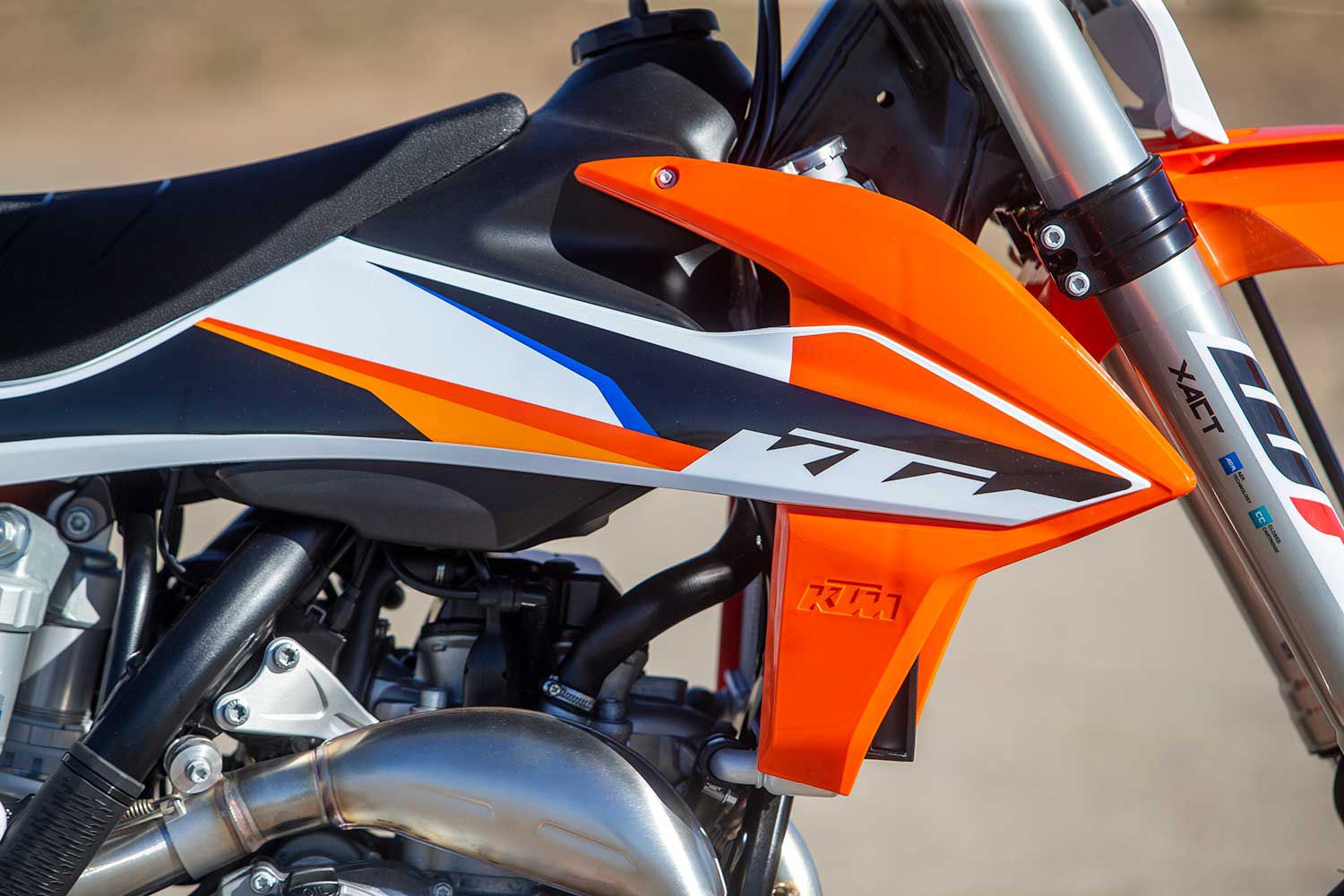 The 450 SMR’s body panels make for a motorcycle that fits well and is easier to control. The 1.8-gallon fuel tank is good for a few hours of track riding fun. (Jeff Allen/)

Compared to the ’18 FS, the SMR’s chassis has added polish with more refined suspension action. This motorcycle is extremely agile and has almost no dreaded front wheel chatter at lean with a high tire load. The chassis complements the stiffness of the Bridgestone Battlax Supermoto tires netting an exhilarating level of mechanical grip. So much that one can feel the engine load at higher lean angles with heavy throttle because the rear Bridgestone has so much traction. The suspension components offer a wide range of adjustment and we were pleased with the OE setting. Another plus is the wide range of spring preload adjustment afforded by the air fork. 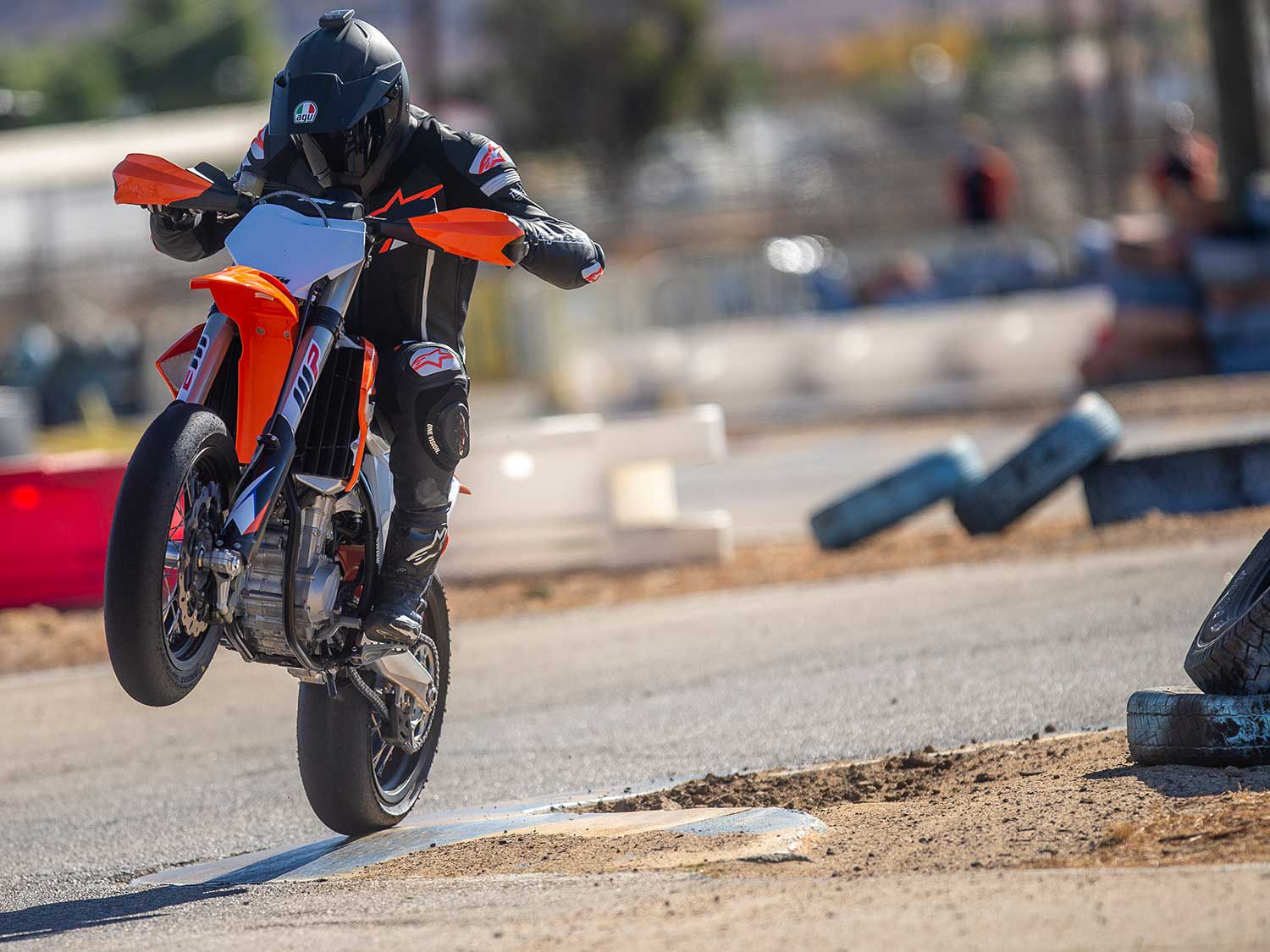 The 449cc engine feels more snappy than we remember. Top-end power is stronger and power tapers off more smoothly as the engine nears redline. (Jeff Allen/)

A streetbike-sized front brake bleeds the 232-pound KTM’s speed. The brake pad material has more bite than we recall and the radial-pump master cylinder gives plenty of stopping power. One gripe: The lever adjustment detent could offer added range for those with smaller hands. The rear brake performs equally as well with a pleasing level of pedal feel. 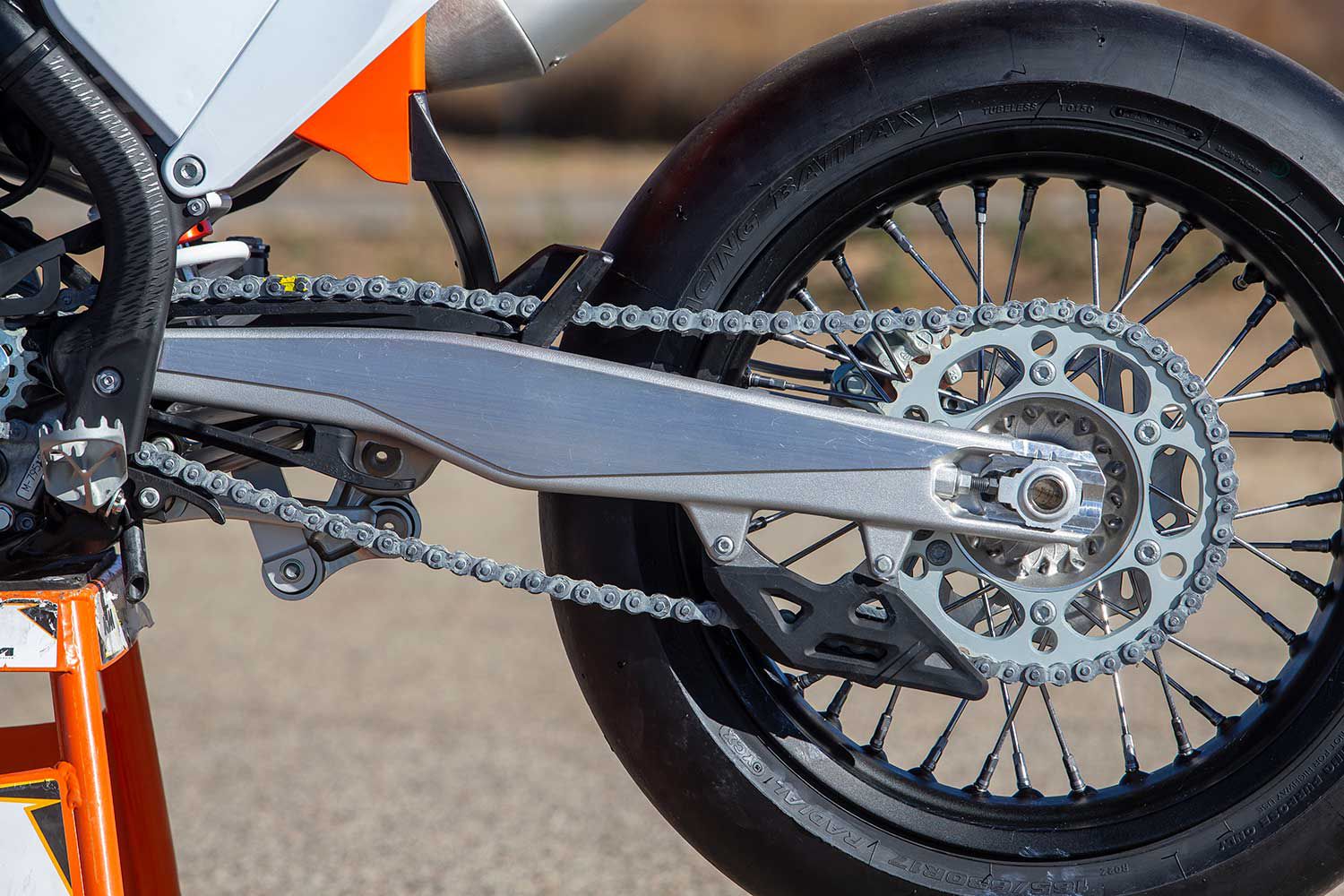 The 450 SMR employs the same frame and swingarm as the motocross bike. Taller final drive gearing lets the SMR run at speeds of around 90 mph in top gear. (Jeff Allen/)

Because the SMR is so specialized in application and its price tag is of course lofty (north of more powerful multicylinder sportbikes), KTM isn’t importing many of these machines. Yet if you’re a rider who desires a well-honed tool for racing around go-kart tracks, the orange bike yields a high level of performance for the price. Plus KTM has done all the heavy lifting for you so you can spend more time wide open versus busting knuckles in the garage trying to retro-fit a 450 moto bike for pavement. 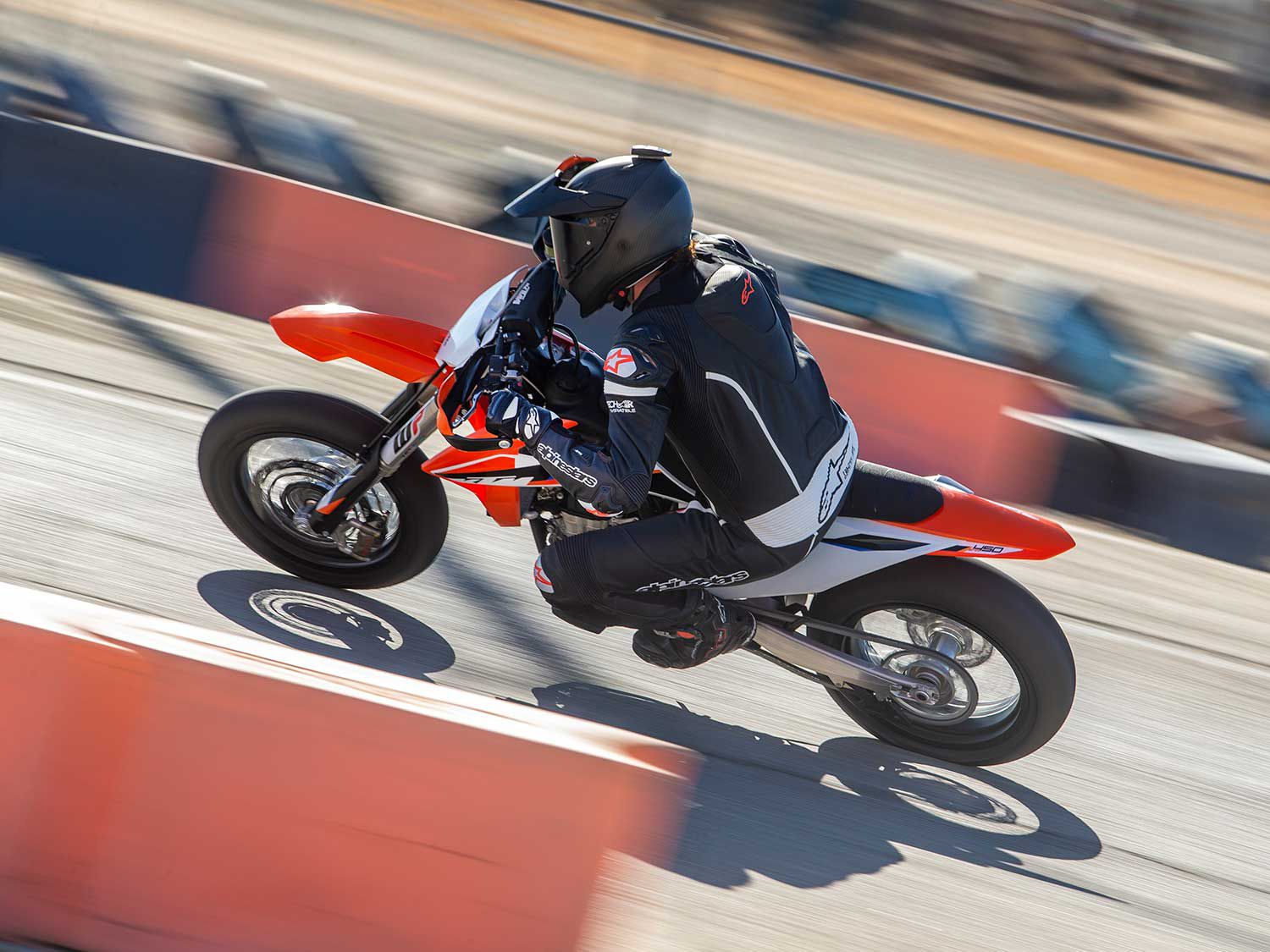 The updated chassis complements the rigidity balance of the Bridgestone Battlax supermoto tires making for a motorcycle with exceptionally high level of grip. (Jeff Allen/) 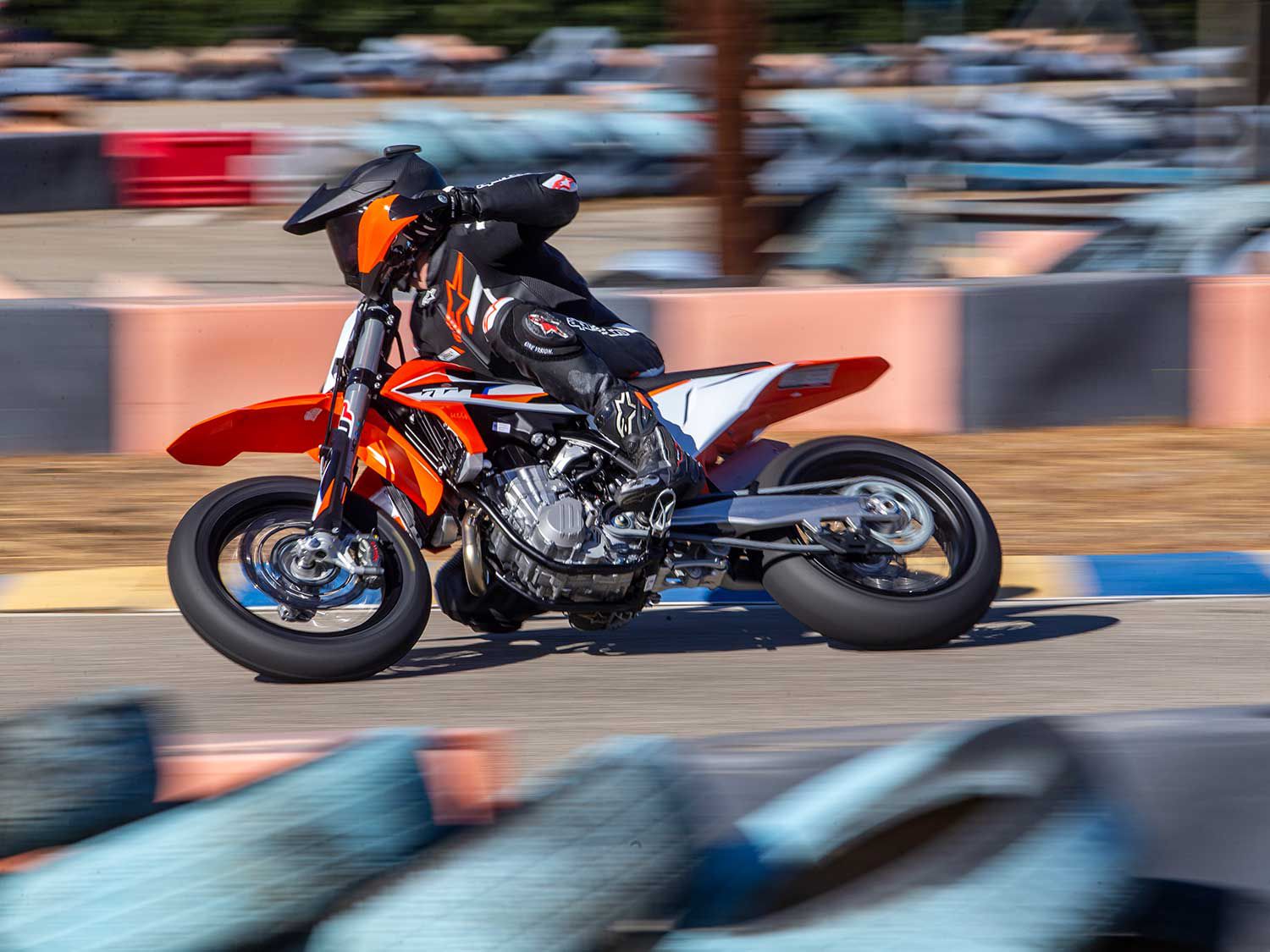 A refined chassis with subtly improved suspension action is one of the improvements of the 2021 KTM 450 SMR. (Jeff Allen/)

The 450 SMR employs the same frame and swingarm as the motocross bike. Taller final drive gearing lets the SMR run at speeds of around 90 mph in top gear. (Jeff Allen/) 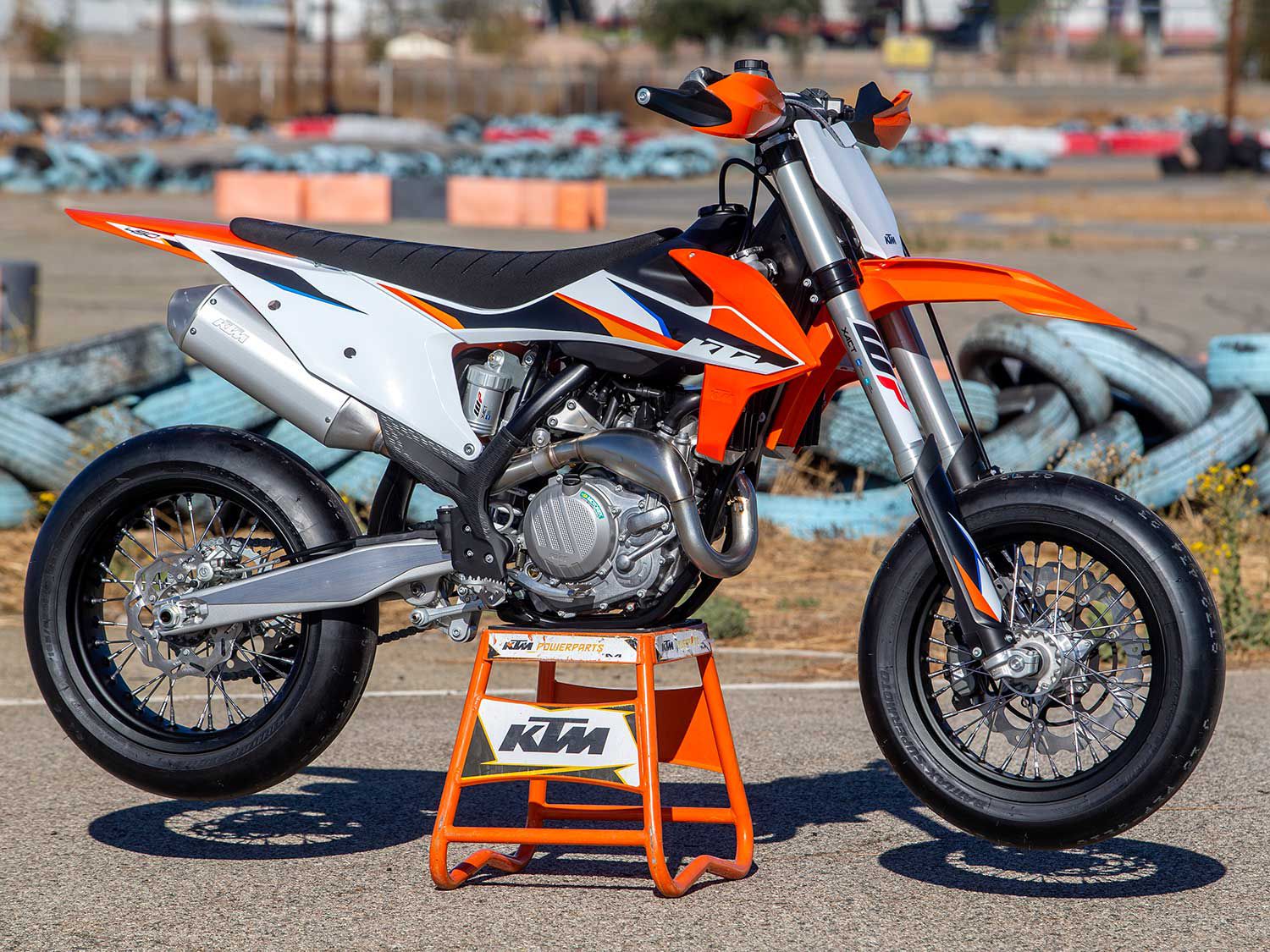 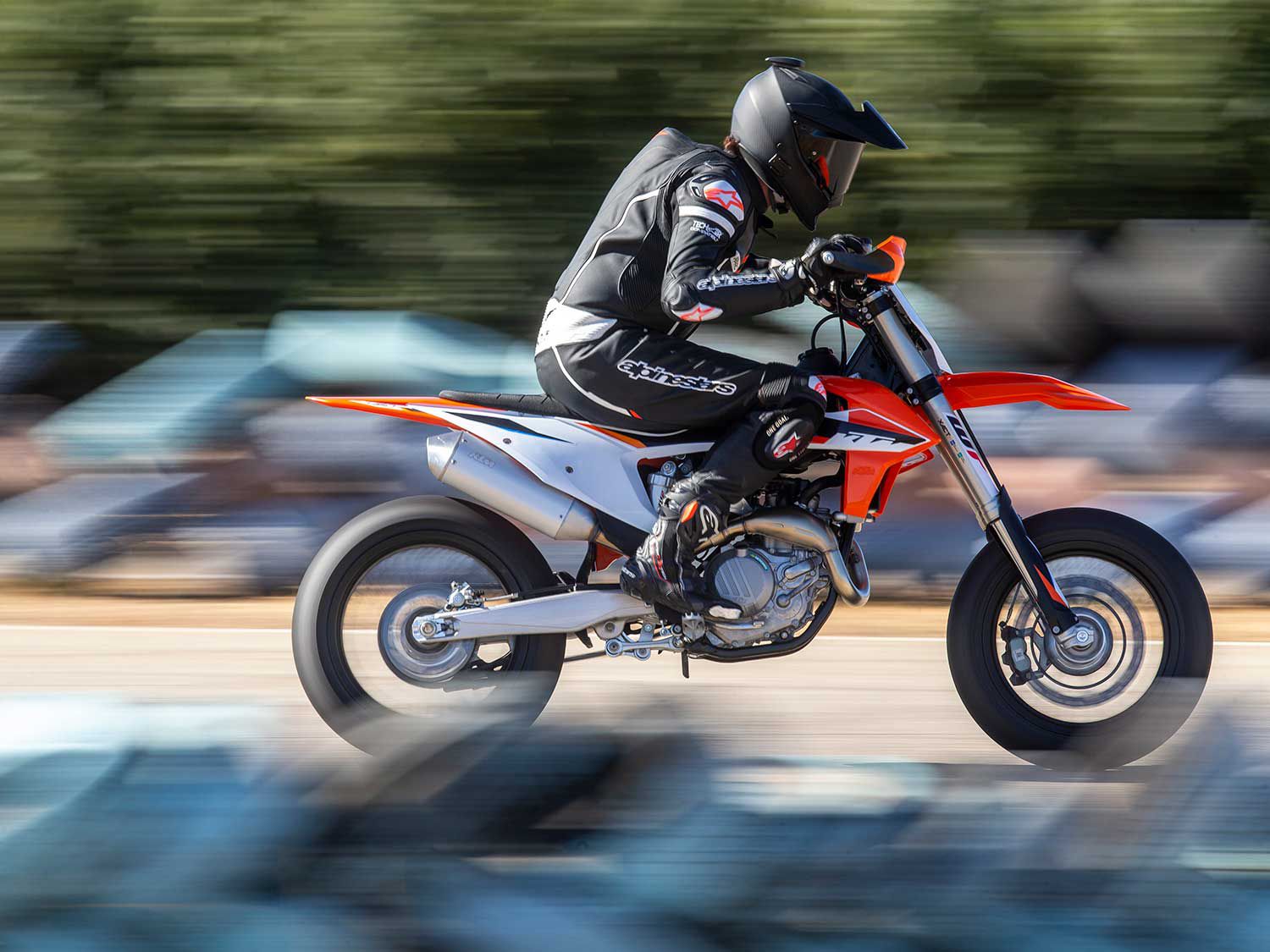 Supermoto riders who would rather spend their time riding rather than working on their homemade garage creation will appreciate the work KTM engineers did building a properly prepped and functional supermoto. (Jeff Allen/)
Sign In or Register to comment.