Pick of the Day: First-year Toyota 4Runner from original owner 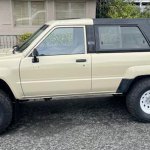 Toyota’s 4Runner is a mid-size sport utility vehicle that has come to combine passenger comfort and room with cargo-carrying capability and a go-anywhere powertrain. But back when the 4Runner was introduced to the US marketplace, it was basically a Toyota pickup truck with a removable shell above its bed.

One of those early 4Runners, a 1985 model, is Pick of the Day. This 1985 Toyota 4Runner is located in Seal Beach, California, and is being sold by its original owner, who is moving to South Carolina, according to the advertisement for the vehicle on ClassicCars.com.

The seller reports the vehicle is rust free throughout and still wears its original Creme paint, though it has new clutch, brakes, windshield, carpeting and brown-leather front seats. There’s also a rear seat in the front section of the pickup bed.

In addition to the SofTopper, there’s a rollover bar across the top of the bed.

The Pick is a 4×4 that “runs great, has not been off-road” but has been garaged and is owned by a non-smoker.

“Factory air blows cold,” the seller reports, and the truck comes with its original key and owner’s manual.

In 1985, 4Runners could be equipped with either carbureted 2.4-liter inline 4-cylinder engines rated at 100 horsepower or a fuel-injected version good for 116 horsepower. This one, injected, is linked to a manual transmission. The odometer shows 115,100 miles.

The 4Runner was preceded in 1981 by the Toyota Trekker, which had a modified bed section with folding rear seat, roof and rear hatch, conversions done by Winnebago.

Toyota’s new 1983 Hilux pickup provided the basis for the original 1984 4Runner, which came with a removable fiberglass shell above the bed and its second-row seat.

4Runners would get permanent, full-steel body shells in 1989.