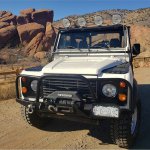 On the auction block this week on AutoHunter, driven by ClassicCars.com, is a 1994 Land Rover D90 5-speed finished in white over a black interior and loaded with numerous upgrades. This car is one of 1,943 North American-spec trucks imported to the US in 1994.

Power is provided by a 3.9-liter V8 engine paired to its factory-installed R380 5-speed manual transmission, which powers all four wheels through a 2-speed transfer case.

The seller installed many upgrades to improve off-road capability and body protection, including a Rockware custom front bumper with a steel cable winch from Superwinch, black diamond-plate wing protectors, four Hella 55w off-road lights mounted to the roof, Terrafirma rock sliders and a custom bumper with a NATO hitch and 2-inch receiver hitch.

The truck also comes with a Rovers North soft top and an original Land Rover hardtop, which, according to the seller, are in like-new condition.


Inside, you’ll find gray cloth upholstered bucket seats in the front and a matching bench seat in the back. The Defender 90 comes equipped with a Cobra CB radio with an external speaker, onboard air compressor, Tuffy center console, and a Panasonic AM/FM/CD stereo head unity.

The dash houses the gauge cluster and readouts for fuel level, water temperature and oil pressure. The odometer reads just over 115,000 miles that are original to the truck.

The most recent service was in November 2020 and included a resurfacing of the flywheel, installation of two new oxygen sensors, a new engine rear main seal, transmission case re-seal, a new clutch and all new fluids.

Visit this vehicle’s AutoHunter listing to find further information and a gallery of photos.