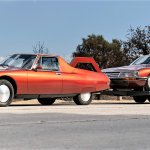 Among the collector cars to be auctioned online during Gooding and Company’s Geared Online Scottsdale Edition are a matched set of streamlined oddities: a Citroën SM speed-record racer and the custom Citroën SM pickup truck and specially built trailer used to tow the race car.

Gooding’s Geared Online auction, which replaces the company’s annual on-site Scottsdale auction because of COVID concerns, will start bidding on its select group of collector cars on Monday, January 18, with the lots closing on Friday, January 22, at 11 am Mountain Time.

“The trio of Citroën-based custom creations offered here all stem from Jerry and Sylvia Hathaway of SM World Ltd., whose mission was to build the world’s fastest Citroën,” Gooding says in an auction news release. “In 1985, after years of painstaking work, Jerry Hathaway cracked 200 mph in the 1972 Citroën SM Land Speed Racer, setting numerous land-speed records and cementing the car as the fastest Citroën in the world.

“Two years later, Sylvia joined her husband in the 200 MPH Club, setting a class speed record that stood for 23 years.”

“In the 1980s, the Hathaways’ truck and trailer used to haul the race car were stolen,” the release explains.  “Looking for a creative solution, another SM was turned into a pickup truck which became their tow vehicle. A custom fifth-wheel-style trailer was then built that utilized Citroën suspension and carried its own battery for the hydraulic pumps.

“Both the truck and trailer are independently height-adjustable, allowing for the race car to be easily loaded and unloaded. These incredible vehicles are well known in the enthusiast community and have been displayed at both the Petersen and Mullin Automotive Museums.

The Citroën SM land speed racer, custom pickup and trailer have a pre-auction estimated value of $100,000 to $200,000, and are being offered without reserve.

For more information about the Geared Online auction, visit the Gooding website.