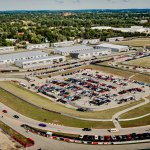 Officials of Detroit’s floundering North American International Auto Show, which was postponed and then canceled in 2020, have announced cancelation again for 2021, but also a “bridge to the future” in the form of a new event, Motor Bella.

While the auto show was held in downtown Detroit, this new event will be staged outdoors in Pontiac, Michigan, at the M1 Concourse. The concourse is a test track and private garage facility located on the 87-acre site of a former General Motors assembly plant adjacent to the famed Woodward Avenue.

Scheduled for September 21-26, 2021, “The new event will bring next-generation mobility and exciting vehicle debuts to media, show-goers and the automotive enthusiasts’ world in a never before experienced way while also addressing continued COVID-19 concerns about indoor events,” according to the news release.

“The pandemic has caused changes in our society and world in ways not previously imagined, and we all should be looking for new and highly creative ways of doing business,” said Rod Alberts, auto show executive director. “This new event captures that creative spirit. It will provide new mobility experiences and increasingly innovative approaches to tapping into the industry and its products.”

Noting that “auto shows around the world are being reimagined and will continue to do so in the wake of the pandemic,” the news release continued to quote Alberts:

“We cannot ignore the major disruptions caused by the pandemic and the impact it has had on budgets. As such, we will be providing an amazing experience to the media, the auto industry and the public in a cost-effective way.”

Promoters of the Grand National Roadster Show and the Sacramento Autorama have announced the cancelation of both events for 2021 because of the ongoing coronavirus pandemic. The 72nd annual Roadster show, the most prestigious of its kind in the country, had been scheduled for May 14-16 at Pomona, California. The Sacramento event, one year younger than the Roadster show, had been scheduled for April 9-11.

Rather than trying to produce back-to-back but socially distanced events at the same venue, the Goodguys Rod and Custom Association, the Barrett-Jackson auction company and the City of Scottsdale, Arizona, have agreed that Goodguys will delay the Spring Nationals car show until April 16-18.

The event had been scheduled for March 19-21. But with Barrett-Jackson pulling out of the traditional Arizona Auction Week this year and wanting to move its massive and 50th anniversary collector car auction to March 20-27, there was an obvious conflict for the use of the WestWorld complex.

After acknowledging Scottsdale’s cooperation in the date changes, “We’re also grateful to Goodguys for their flexibility in moving their March Spring Nationals at WestWorld of Scottsdale to April,” Craig Jackson is quoted in the announcement. “Working together, we found a solution that works for everyone.”

“After plenty of discussions, we are pleased that we could come to a mutually beneficial agreement with everyone involved,” said Andrew Ebel, chief operating officer for the Goodguys. “The City of Scottsdale, Barrett-Jackson and local automotive enthusiasts all win with this new schedule. We look forward to putting on a fun and safe event over the new dates in April.”

The Goodguys’ new April date is the weekend after the nationwide show visits Del Mar, California, on April 9-11.

Scottsdale mayor Jim Lane praised the collaborative work “to the healthiest possible environment for guests. Working through the many challenges together, including adjusting their event schedules, I am very pleased that Barrett-Jackson and Goodguys will continue bringing their unique events to Scottsdale even with many adjustments that continue to be necessary in respect to public health guidelines.”

The 57th annual Darryl Starbird National Rod and Custom car show has been postponed until April 30-May 1, the Starbird Team has announced. The venue remains the River Spirit Expo center in Tulsa, Oklahoma.

“Due to current restrictions and regulations regarding COVID-19 along with careful consideration, research, consultation with the building, observations of other events and most importantly wanting to ensure everyone’s safety along with the experience they’ve come to enjoy at a Starbird Show, we feel it would be in everyone’s best interest for our show not to occur in February of this year,” the team announced.

Can your car do party tricks?

The AACA credits member Hal Kennedy for sharing a pair of videos about American Car Party Tricks. The first includes cars produced from 1949-1962 and the second those from 1963-1972.

As the Journal recently reported, the 2021 Amelia Island Concours d’Elegance in Florida has been postponed from its usual early March weekend to May 20-23 in response to the resurgence of the coronavirus pandemic.

Following are dates currently set (but subject to change) for a variety of concours d’elegance, car shows and driving tours scheduled during 2021: